Joined Swapo and left for Angola and military training at Lubango at the age of 19 in 1977. Continued to Nyango in Zambia and worked in the camps until she continued to nurse training in Tanzania. Came back to Zambia and then again Angola and Kwanza Sul in 1980. Worked there together with the Swedish Medical Team from the Africa Groups . Studied in Nigeria between 1985-1989 and was then repatriated to Namibia. 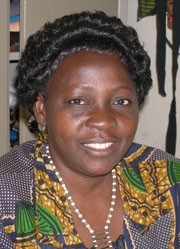 Bertil Högberg: It is now 15 June 2005 and I’m sitting here in the living room of Mrs Mary Iyambo in Walvis Bay, on the coast of Namibia, in the Namibian desert. So what are you doing here in Walvis Bay?

Bertil Högberg: How many are working in that laboratory?

Mary Iyambo: I have two technicians and a lab. aid and I’m waiting for a laboratory assistant to complete the set and me alone as a technologist.

Bertil Högberg: How long have you been working here for the state?

Bertil Högberg: But you have a history before that, how did you become involved in the struggle for the liberation of Namibia?

Mary Iyambo: Well as other young Namibians we had some elders who were ahead of us, who tried to make some rallies where we all attended and then we became aware of the need to liberate the country. So I left the country in 1977.

Bertil Högberg: And how old were you then?

Bertil Högberg: And where did you live at that time?

Mary Iyambo: Oh, I was born in the north of the country so I was there in the deep rural areas, in one village called Okashana about 38km northeast of Ondangwa. It was formerly Oshigambo but now they call it Ononkulo.

Bertil Högberg: Oshigambo, there was a high school there?

Mary Iyambo: Yes. In that area.

Bertil Högberg: So you left for Angola and what happened then?

Mary Iyambo: I left for Angola with other students and then we joined SWAPO in Angola.

Bertil Högberg: Had you completed your high school education?

Bertil Högberg: You never actually went into combat or into the Liberation Army?

Mary Iyambo: No, that same day – after the military training I didn’t go for combat. I went to get further training. Actually we were supposed to go to Britain, I don’t know what happened in the process, I just found myself again in Zambia. We went, there was a camp called education centre, where kids, women and elders stayed.

Mary Iyambo: Yes, Nyango. So I went to Nyango and stayed for about 7 to 8 months before I went to Tanzania then, in 1978, August ’78 we went to Tanzania. So I did my medical auxiliary and after completion I was again one of those who were selected for further studies, to do the laboratory auxiliary. And then when we finished, we came back to Angola in January 1980 and I started to work in Kwansa Sul for 2 months, January to February, and then early in March I went to Luanda again. Then the kids were being shifted from Zambia to Angola so I was the nurse for those kids in transit. You remember there was a transit camp where people were staying. It was people who were coming from abroad into Angola and those who were going off to schools. I was one of the nurses in that centre, but I was specifically for those kids who were coming from Zambia to Angola. And from there I went back to Kabuta in Kwansa Sul. That is where I met Gittan. I started to work in the lab.

Bertil Högberg: And Gittan she was a Swedish lab technician there?

Mary Iyambo: Yes, she was a lab. technician and then I was a laboratory auxiliary so I worked with her there in Kabuta from August that year up to the following year.

Mary Iyambo: I don’t know how long she was there but I worked with her until she went back to Sweden.

Bertil Högberg: But you also met the other Swedes that were there?

Bertil Högberg: Yes, there were quite a few people that worked in those days. What was your impression of them then when you met these Swedish people?

Mary Iyambo: I was actually very impressed by the Swedes. As I saw it weapons to South Africa were from the Western side, of which we thought Sweden was part, but there were these people who were still determined to go and help us even if they knew we were maybe to be bombed or shot by these same weapons. That didn’t discourage them. They were still ready to come and help us. I was really impressed because as young Namibians we didn’t know there were some whites that were on our side. Actually we had combat names, we even named them. I can remember Gittan, we gave her Meduletu as her combat name. Meduletu means in our language…[machine switched off ]

They were prepared to sacrifice their personal convenience also. I remember once when it was raining and they went out in the rain to feel the water coming on their hair and body. They could only shower in Luanda since we had so little water. We were used to wash with little water but they were longing for a shower.

Bertil Högberg: How was it to work with Gittan, the Swedish lab. technician ?

Mary Iyambo: It was the best days I had. It was also the first real work experience. She was leading the way and always ready to help when we needed.

Mary Iyambo: Not really, I gained a lot of experience from them. I was only trained as a lab. auxiliary which was adequate for the level our lab was but you needed some experience. There was one man that was a driver and used to collect samples from various clinics for us to test. He was very interested in the lab work and spent a lot of time with us after he had done his duties. Gittan gave him some basic training and I had to assist as translator. Gittan recommended him for further training and he was sent to Tanzania. He had however a limited formal schooling so he was transferred from the lab training to X-ray and now works in the X-ray department in Oshakati hospital. He is still grateful for the chance he got. “Otherwise I would still have been a driver.”

Bertil Högberg: What was the most important thing you learnt from the Swedish medical team?

Mary Iyambo: That you also need to sacrifice. They did sacrifice for us though they had nothing to gain from it. To do this under such circumstances. It was not only the tough living conditions it was also the war situation.

Bertil Högberg: Were you living close together?

Mary Iyambo: Yes, we lived in houses next to each other that time in Kabuta. We became close friends especially with Gittan. I also remember Lotta, Magdalena and Claes and Kina.

Bertil Högberg: Were there other lab technicians coming after Gittan?

Mary Iyambo: No she had told Dr Indongo, the SWAPO Secretary for Health that she thought that I would be able to do the job myself.

Bertil Högberg: How did you feel then?

Mary Iyambo: I was very proud.

Bertil Högberg: But nurses and doctors continued to be sent?

Bertil Högberg: Did you receive any further training?

Mary Iyambo: Yes, I was in Nigeria between 1985 and 1989. I studied first to become a lab. technician and then two more years to become a lab. technologist. We did also take evening classes to complete and take high school exams. I have continued training on a part time basis with the Cape Technicon.

Bertil Högberg: Did you come back to Kwanza Sul and Kabuta?

Mary Iyambo: No, when I came back from Nigeria it was time for repatriation in 1989 and I went home. In 1990 I got a job at the Windhoek state hospital. Later I moved to Oshakati and the hospital there. I reunited with the father of my firstborn daughter in 1989. We had not seen each other for 9 years. He was on the front all the time. We got married and then had another daughter. He was in the military after independence so I have moved around depending on his postings. Now he is Chief of Police in the Erongo region.

Bertil Högberg: Did you ever see the hospitals that were built in Kwanza Sul?

Mary Iyambo: No, I heard about these new structures.

Bertil Högberg: Did you have any disagreements or controversies?

Mary Iyambo: No, not that I can remember.

Bertil Högberg: There was a lot of material support in the form of second-hand hospital material and clothes that was provided from Sweden. Did you not think that it would have been better with new things?

Mary Iyambo: No, that they were second-hand meant that someone might have given away something which was a sacrifice and that was appreciated.