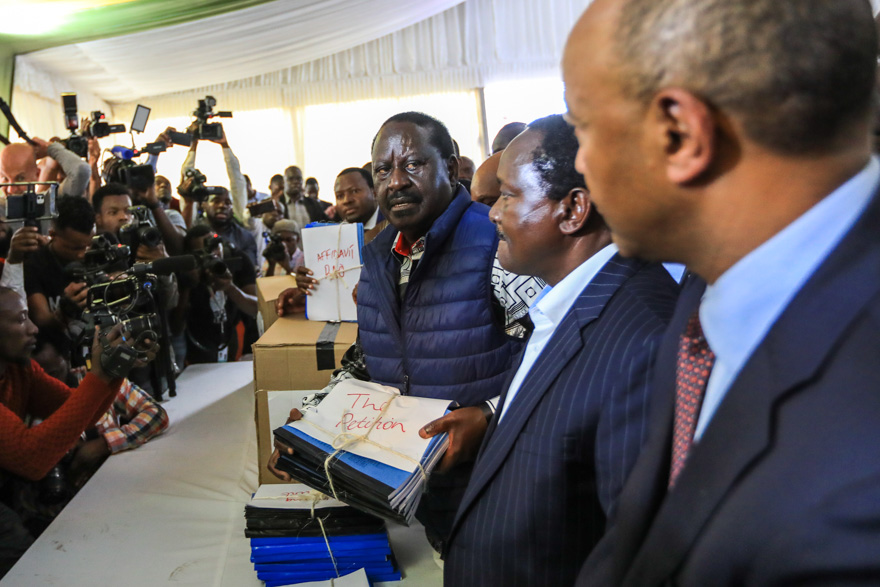 Despite the familiar imagery of post-election chaos, the 2022 Kenyan elections may in fact point to the robustness of Kenya’s democracy, in which institutional grievance mechanisms have gained acceptability. Regardless of the outcome of the ongoing dispute, both contenders are faced with the challenge to regain the trust of an electorate that has grown tired of the country’s political class.

On Monday, 15th August, Kenya’s Independent Electoral and Boundaries Commission (IEBC) invited presidential candidates and their representatives, election observers, journalists and diplomats to the official announcement of the presidential results. Since election day, six days earlier, Kenya had been in a limbo, with many businesses and schools pre-emptively shut down. All polls predicted a tight race between the two heavyweights Deputy President William Ruto and the leader of opposition, Raila Odinga, often in favour of the latter. While the official tallying was still underway, chaos was imminent. A leading representative of the Odinga coalition called the tallying centre a “crime scene” as both sides claimed victory. Then on 15th August, an initial attempt by the IEBC chair to announce the official results was thwarted as representatives of the different parties threw chairs at each other on live TV, thereby forcing police officers to intervene

External link, opens in new window.. Furthermore, on the same day, four out of seven commissioners of the IEBC called a press briefing declaring that they cannot confirm the results to be announced, thereby indicating a split in the electoral body

External link, opens in new window.. When IEBC chair Chebukati eventually declared William Ruto president-elect of Kenya, the nation held its breath as the scenery painfully reminded Kenyans of the aftermath of the 2007 elections, when a hasty swearing-in ceremony of the incumbent president Mwai Kibaki, barely half an hour after the chaotic announcement of the results and amidst allegations of fraud made by the same Raila Odinga, fomented large-scale violence across the country.

While Kenya has a long history of disputed elections

External link, opens in new window. that goes back to the 1990s when autocrat Daniel Arap Moi tightly steered the multiparty elections

External link, opens in new window., the trauma of 2007/2008 post-election violence sensitized the nation and ushered in a reorganization of the country’s political system. And yet, the 2022 elections displayed signs familiar to many Kenyans: a peaceful voting process followed by a slow and unnerving tallying process, resulting in accusations of fraud and a rejection of the results by one party. Undercurrents of the ‘same old’ notwithstanding, we identify three dynamics that are likely to influence future elections in the East African powerhouse. First, demonstrated capability by the judiciary to provide proper checks and balances on the electoral process promotes a move towards credible and democratic elections. As we show, previous court rulings are behind IEBC’s current moves to be transparent and accountable to the Kenyan people. Second, voting along ethnic allegiance turns into a less important feature in Kenyan politics. While such pattern remains stout in several areas, socio-economic factors—always strong but underacknowledged by observers—attain a more pivotal role. Related, elite preferences do not per se determine outcomes. Provided that the official results are correct, this was only the second general election where the endorsement of a candidate by an outgoing president did not translate into victory. Third, the acceptability of the Kenyan Supreme Court as a reputable final arbiter for presidential elections has lowered the likelihood of election-related violence.

Unlike previous elections, many observers

External link, opens in new window.. In the past, Kenyans relied on the electoral body to keep them updated on the voting results, but this time, everyone could publicly access the results from the around 46,000 polling stations on the IEBC portal and do their own tallying. A series of political and legislative processes lie behind this development. Two of the most significant changes that emanated from the post-election violence of 2008, were a new constitution that created an independent electoral body and a delegation of legislative authority to 47 new counties. Despite these reforms, the IEBC has struggled to shake off the shadows of its predecessors. This is well illustrated by the nullification of the 2017 presidential election

External link, opens in new window. over wrongdoings, technical hiccups, and opaque procedures by the IEBC. A more fundamental development that crucially shaped IEBC’s tallying process was a civil appeal by several Kenyan activists in 2017. In its ruling, the court ordered that the results declared at the polling stations were final

External link, opens in new window., and that an election court was the only actor that could change the results. With this, the court circumscribed the role of senior IEBC officials to only tallying and verifying results from polling stations. Therefore, we interpret the current efforts by the IEBC to make the results from all polling stations public as a strategic move aimed at boosting public confidence in electoral results.

Voting patterns are here to change

External link, opens in new window., albeit close. It was Odinga’s fifth run for presidency, and this time his victory was a safe bet; though formally in opposition, he had the backing of the political elite. Uhuru Kenyatta and Raila Odinga were rivals during both the 2013 and 2017 elections. Their iconic, and for many people confusing, handshake in March 2018, however, unravelled some of the certainties in Kenyan politics. As much as it forged a new powerful alliance, it also created a split between the President and his Deputy William Ruto

External link, opens in new window.. Together, Kenyatta and Odinga had the numbers: Odinga not only marshals the vote from his Luo home counties, but he also commands considerable support in many parts of the country. Kenyatta was expected to ensure the Kikuyu vote, with 8 million people the largest community in Kenya.

Even though Kenya has a solid history

External link, opens in new window. of voting along ethnic allegiances, in the 2022 elections the traditional arithmetic flopped. It would be a misreading of the voting patterns to claim that there is a clear turn towards voting along ‘issues’, a storyline that Ruto strongly entertained. Nevertheless, to the surprise of many observers, Ruto made significant inroads into Odinga strongholds such as the coastal region and parts of Western Kenya. For instance, in Mombasa, which has been traditionally Odinga’s stronghold, Ruto marshalled around 40% of the votes. To be declared winner, a candidate does not only have to receive 50% plus one vote of the total votes cast, but the candidate must also win at least 25% of the votes in at least half of Kenya’s 47 counties. According to the result announced by the IEBC, Ruto delivered on that in 39 out of the 47 counties.

Socio-economic issues had without doubt stronger traction than ever before in this year’s election. During his campaign, Ruto entertained the narrative of the “hustler vs. dynasties”, siding with the wananchi, the rural poor and the urban jua kali youth, who struggle to make ends meet. Personally, Ruto exploited the story of having true ‘street credibility’ as he claims to have started his professional life as a hawker. His economic agenda, with the wheelbarrow as the icon, centres on bottom-up initiatives; a symbolic departure from the trickle-down economics that has pervaded Kenya’s post-independence economic planning and Uhuru’s legacy of large-scale infrastructure projects, which have contributed to Kenya’s staggering debt rate of almost 70% of the country’s GDP

External link, opens in new window.. More importantly, Ruto promised to end the clout of political dynasties by ostensibly terminating the rule of three families (Kenyatta, Moi and Odinga) who have had stakes in Kenyan politics since its independence. The insider Ruto entered the presidential race by presenting himself as an outsider

External link, opens in new window. to the system. Ruto has not only been the Deputy President for the last decade, he also built his career some 30 years ago as a protégé of long-term ruler Daniel Arap Moi. He is the very product and long-term beneficiary of a political culture

External link, opens in new window. that he now set out to fight.

Nevertheless, the “Hustler nation” narrative seems to have gone home. While the political establishment openly lambasted and ridiculed the impracticability of Ruto’s bottom-up model

External link, opens in new window. and further accused him and his deputy of failing the integrity test over accusations of corruption

External link, opens in new window., Ruto managed to turn the picture painted of him as a villain into powerful political capital.

However, the outcome does not necessarily indicate overwhelming support for William Ruto either. According to figures from the IEBC

External link, opens in new window. Had it been higher, the election could arguably have gone either way. The low turnout in Odinga’s strongholds had a noticeable impact on his performance. Moreover, despite enjoying the support of the current political establishment and other influential elites, Odinga failed to garner the results predicted by many pollsters. The initial excitement by Odinga’s announcement of Martha Karua as the deputy president nominee did not captivate the Mt. Kenya and youths’ votes.

Take it to the court (not to the streets)

External link, opens in new window. at the Supreme Court, seeking to overturn Ruto’s win. He accused the IEBC chair of unilaterally announcing the results without proper tallying and verification from all constituencies, and of manipulating the electronically transmitted results. His concerns over vote manipulation have been echoed by four IEBC commissioners who rejected the results

External link, opens in new window.. In a rejoinder

External link, opens in new window., the IEBC chair however painted the four commissioners as villains with vested political interests. Although delaying the electoral process, the move to the Supreme Court provides an important avenue for aggrieved political actors and their supporters to address electoral disputes peacefully. The focus now shifts from the streets to the legal process where three outcomes are possible. One, the Supreme Court may uphold the election of Ruto as the President-elect. Secondly, the court may order for a re-count/tallying of the votes or lastly, annul the election and order for a re-run as was the case in 2017.

Despite the current uncertainty, the 2022 elections point to the growing resilience of the Kenyan democracy. The acceptability of taking legal measures to examine potential irregularities has addressed the problem of endemic election-related violence. Regardless of the Supreme Court’s verdict, the next president takes over the reins in a county bedevilled with high debt, high inflation, and runaway youth unemployment. Both candidates belong to the country’s political class who will need to show significant effort to regain the confidence of a citizenry that is no longer willing to accept the politricks played by the elites.