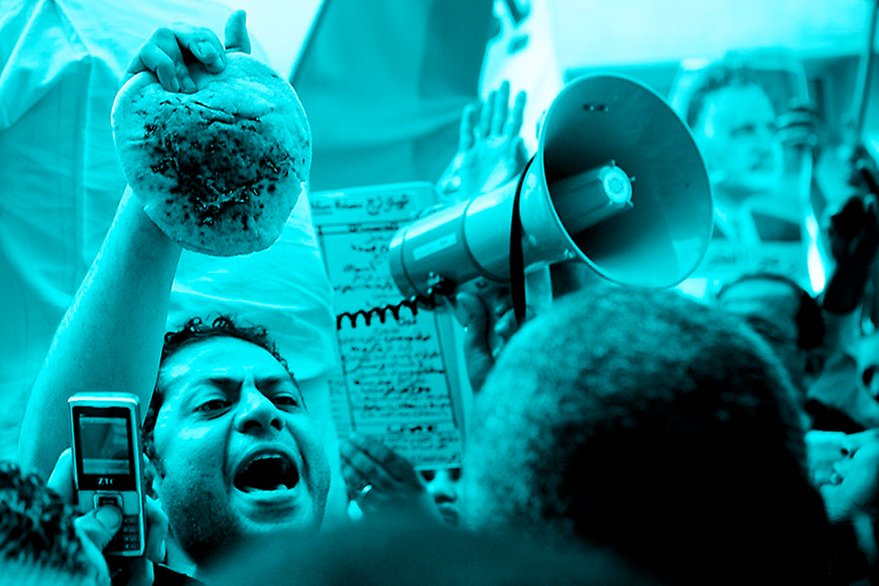 Cairo, Egypt, May 2010. Activist Bahaa Saber carrying a loaf a bread, and talking to workers and activists during a demonstration against the government. Photo: Hossam el-Hamalawy.

Apart from being a humanitarian tragedy, Russia’s invasion of Ukraine has also emerged as an exogenous shock to global food supply chains, with severe consequences for many African countries in particular. Four months into the invasion, we can see three main threats to food security in Africa: a disruption to energy markets and shipping routes; a shortage of fertilizers; and the negative ‘third-party’ effects of sanctions imposed on and by Russia.

The Russian invasion of Ukraine poses significant threats to Africa’s food security. Both the timing and the two parties involved in this conflict aggravate the adverse impacts of the invasion and foreshadows to disrupt food supply chains and subsequently exacerbate food insecurity challenges in Africa through three main pathways: Disruption of energy markets and shipping routes, shortage of fertilizers and inputs, and negative "third-party" effects of sanctions imposed on and by Russia.

A fifth of Africa’s population was already suffering from hunger prior to the invasion, a higher proportion than in any other region in the world. The heavy reliance of Africa on international food markets together with the large share of food commodities in households’ expenditure imply that the war can significantly decrease food supply and increase domestic food price inflation. The ongoing war not only threatens food security, it could also inflame conflict and destabilize African governments and political systems.

African governments and their development partners need to respond quickly and decisively on the short-term issues while working to address the longer-term ones to boost food and nutrition security and strengthen food systems. In the short run, efforts should focus on strengthening social protection systems to enhance food access and increase the purchasing power of vulnerable groups. In the long run, stronger international co-operation is needed for building productive capacities of African food systems and enhancing their resilience and preparedness to deal with future shocks.

Although the war is being waged more than a thousand miles away, African countries in particular are not screened from its repercussions, which endanger fragile food systems and foreshadow worrying impacts on food security and nutrition on the continent. These consequences threaten to derail national and global efforts to end hunger and poverty and to achieve sustainable development goals on the continent.

The vulnerability of African food systems

External link, opens in new window. comprises various elements and activities related to food production, processing, distribution and consumption, as well as the associated output of such activities. Africa’s food systems are especially susceptible to the impact of exogenous shocks, including geopolitical conflict, due to the inherent environmental, socioeconomic and institutional characteristics of the agricultural and food sectors. For instance, with their significant contributions to economic growth (around 25% of GDP) and employment (around 50% of the labour force), food systems largely determine economic development and the provision of other essential socioeconomic services in Africa.

In recent decades, land and water resources in many African countries have, however, been dwindling at an alarming rate. Climate and nature-induced changes are increasingly bringing harsher conditions for agricultural production to many regions of the continent. In tandem with this, the continent’s rapid urbanization is associated with high rates of urban sprawl over prime agricultural land. Taken together, these challenges jeopardize the capacity of Africa’s food systems to meet the food security of a rapidly rising population. Just as important is the heavy reliance of African countries on the international market to meet their domestic food needs: over 80% of food consumed domestically is imported

External link, opens in new window. from outside the continent. Therefore, the characteristics of African food systems increase their vulnerability to exogenous shocks and add further sustainability pressure to efforts aimed at eradicating hunger, reducing poverty and achieving food security. 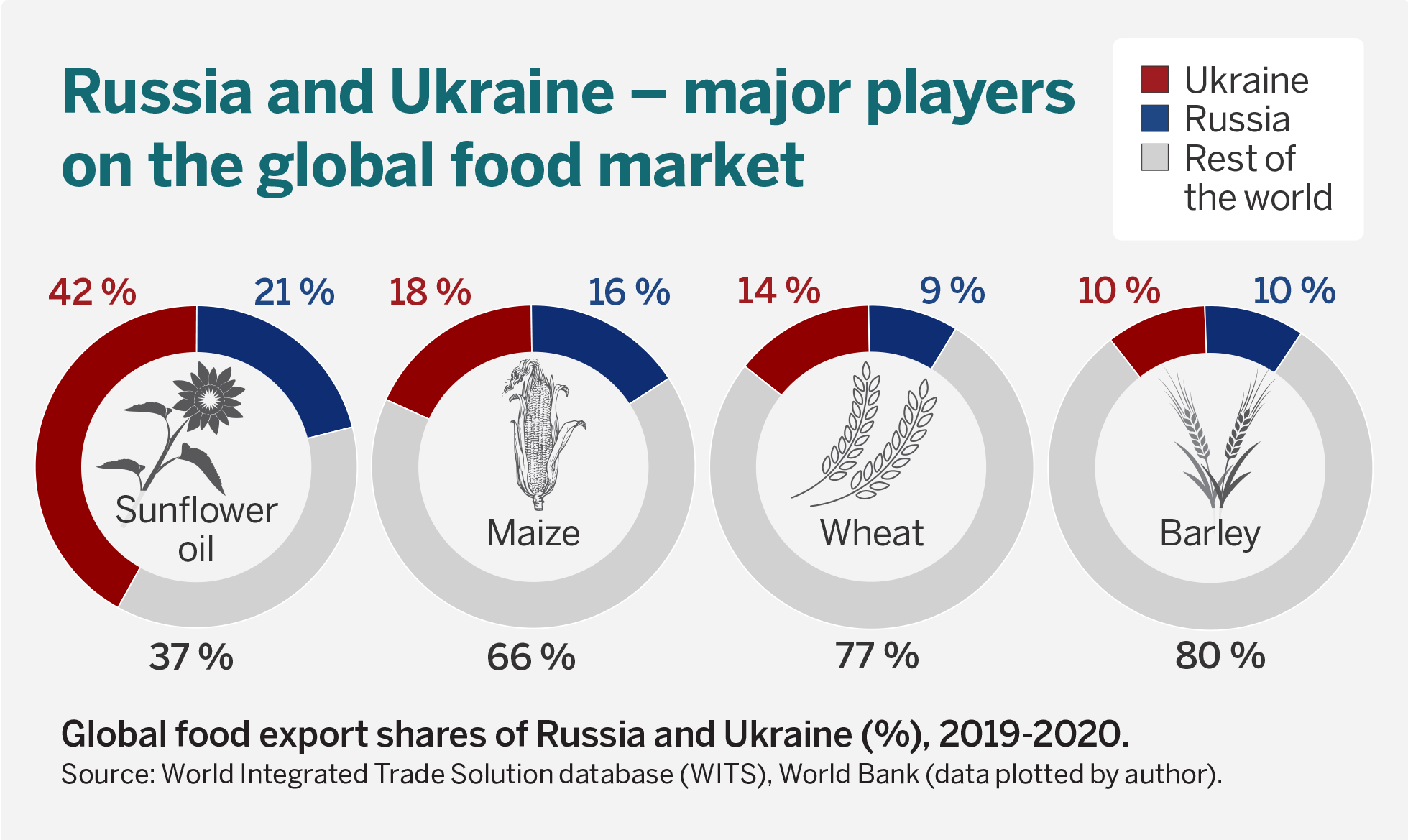 To gain a better understanding of the current and likely future impact of the invasion on Africa’s food security, two important factors should be considered jointly. The first is to do with the timing of the invasion: it has coincided with a period when food supply chains (FSCs) in Africa are still struggling to recover from the Covid-19 pandemic, which disrupted FSC activities over the last two years right along the chain

External link, opens in new window.. Compared to other developing regions, African FSCs bore the full brunt of the pandemic, due to their resource constraints and the limited governance capacity, which prevented governments from responding adequately to the consequences of the pandemic for hunger, poverty and inequality. In this respect, the FAO estimates

External link, opens in new window. that the pandemic has added up to 40 million undernourished people in Africa, and has increased the proportion of Africans who are food stressed by 30% and who are in food crisis by 35%. On top of this, the 2019 plague of desert locusts across several East African countries threatened over 13 million people

External link, opens in new window. in the Horn of Africa with acute food insecurity. As for today, FAO estimates show that about a fifth of the continent’s population suffers from hunger – a higher proportion than in any other region of the world.

The second factor is related to who the two parties involved in the conflict are. Both Russia and Ukraine are major players on the global food market, with a joint share of around 12% of globally traded calories. In particular, those two countries jointly provide nearly two thirds of traded sunflower oil, a quarter of global wheat exports, a third of maize and a fifth of barley. In 2020, the two countries collectively supplied agricultural and food products to African markets worth a total of around USD 7 billion. In particular, the majority of African countries depend heavily on wheat imports from Russia and Ukraine to keep hunger at bay: for instance, Benin and Somalia obtain all their wheat exclusively

Ways in which FSCs are disrupted

A closer look at the developments and trends in global food markets over the four months since the invasion on 24 February underlines three major channels by which the Russian military action against Ukraine disrupts African FSCs and subsequently threatens food security: 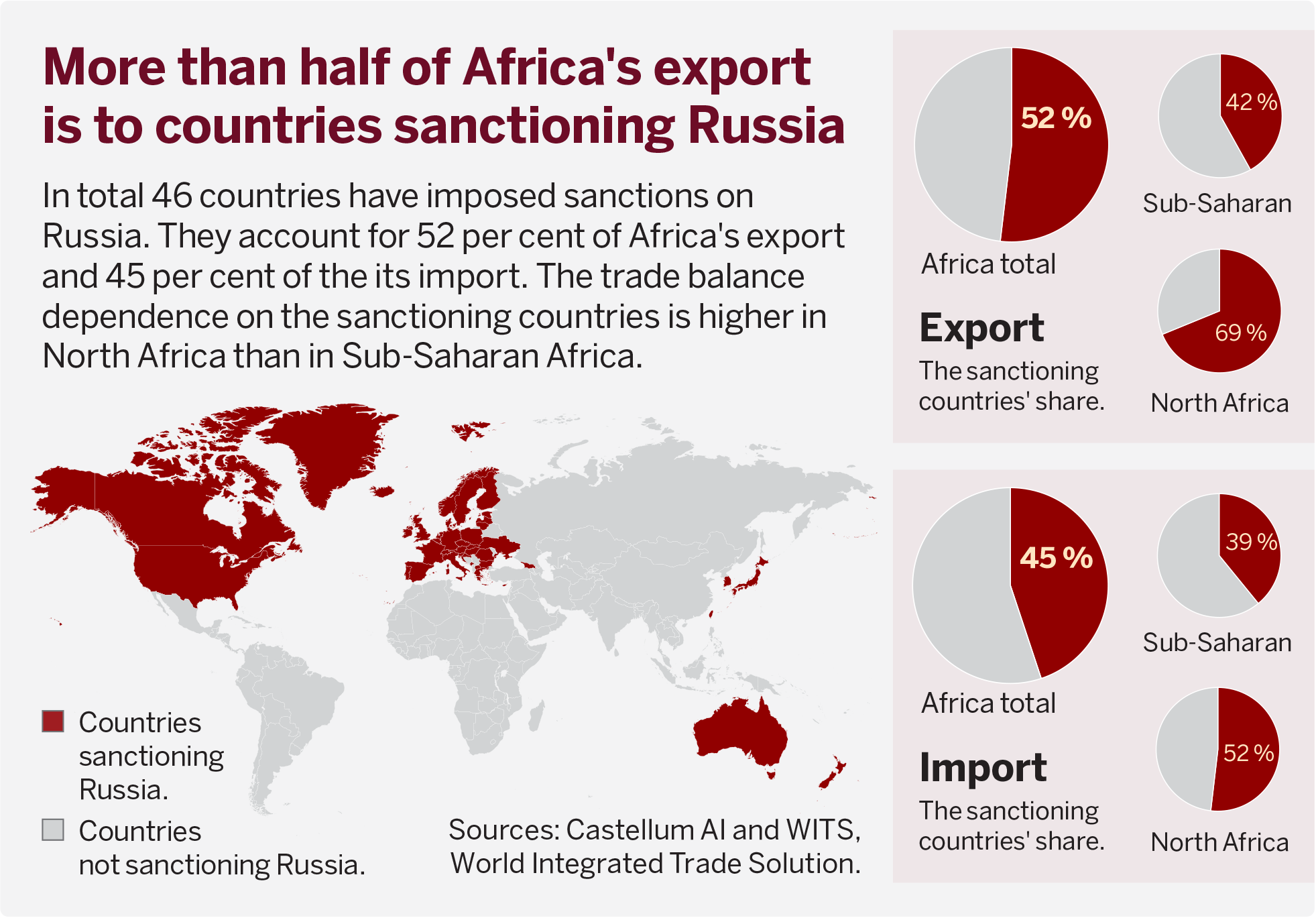 Risk of social and political unrest

External link, opens in new window. stood at 200% in the first quarter of 2022 – and will sharply reduce the purchasing power of poor households. Customarily, food price inflation in Africa leads to enduring effects on headline inflation

External link, opens in new window. through inflationary expectations and workers’ demands for higher wages. The evidence suggests that disruption to FSCs and spikes in domestic food prices are severely damaging the social and economic wellbeing of vulnerable population groups, exacerbating the pre-existing risk of food insecurity and could result in dramatic ‘food riots

External link, opens in new window.’. In many African countries, such food riots could trigger social and political unrest

External link, opens in new window.. Thus, the impact of the Russia–Ukraine conflict not only threatens food security, but could inflame conflict and destabilize African governments and political systems. This scenario should not be taken lightly: eight years ago, in 2014, the rise in food insecurity across sub-Saharan Africa was attributable to violent conflict. And a decade ago, food price inflation served as a catalyst for the ‘Arab Spring’ in North Africa 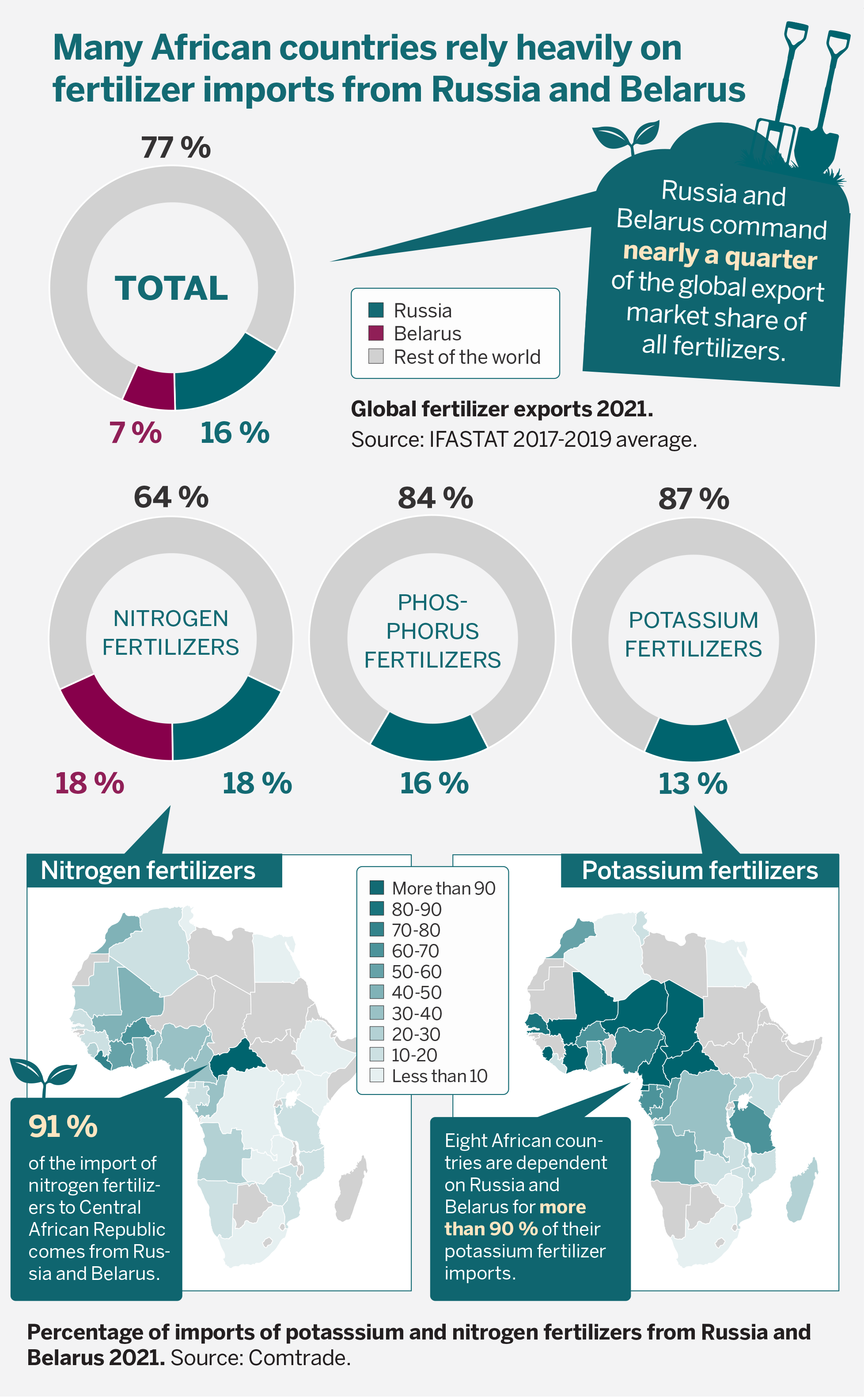 NAI Policy Notes are a series of research-based briefs on relevant topics, intended for strategists and decision makers in foreign policy, aid and development. They aim to inform and generate input to the public debate and to policymaking. The opinions expressed are those of the authors and do not necessarily reflect the views of the Institute. The quality of the series is assured by internal peer-review processes and plagiarism-detection software.