Russia-Africa summit in a time of aggressive posturing 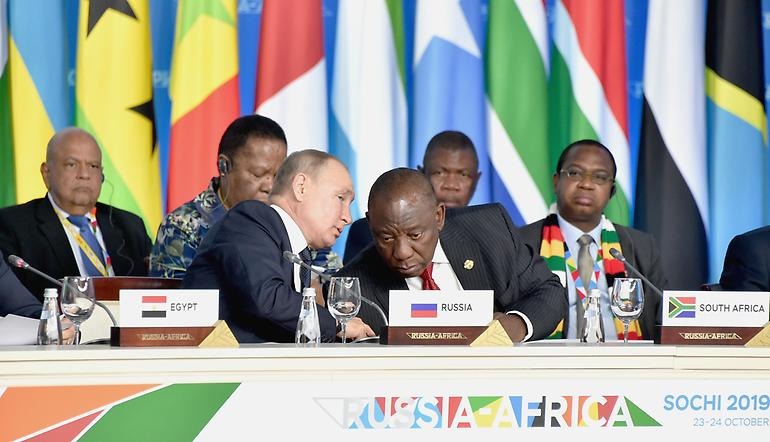 "One should not deny that Russia has something to offer Africa in a global system that is increasingly characterised by a growing interdependence. However, the 'giver-recipient' relationship needs to be understood within the context of the past and current realities at various levels, regional and global. Russia's promise to offer Africa good deals is coming at a time when both Russia and the US are engaged in aggressive posturing, threats and counter-threats that amount to almost reviving the Cold War. Both are posing for military superiority through increased armament that has far-reaching consequences for international security and global peace. What does Africa stand to gain from this? The paradox is that Russia is offering better 'deals' as alternatives to offers from the West to aid African development. These deals comprise of aid and assistance which include military soft and hard wares. Why is Russia doing this? Certainly it is not a demonstration of altruism as it is a strategy to increase its influence in Africa and challenge the hegemony of the West in the region."

How does Russia compare to China as a player in Africa?

"The driving force for more presence and influence in Africa is the same for China and Russia. That explains why there are no fundamental differences in their modes of engagement with Africa. More than Russia, China is committed to influencing global developments and active participation within international organisations, and it is more visible at platforms for multilateral diplomacy. China shows increasing interest in global peace and international security, climate change and energy politics, more so than Russia. Also, whereas China lays claim to be committed to non-interference in the domestic politics of African states, Russia is not likely to do same going by its track records of expansionist behaviour. Notwithstanding, both are undeniably interested in Africa’s expanded markets and natural resources."

How important are Russian/Soviet historical ties for its influence on the African continent today?

"During the Cold War era the Soviet Union and the West extended their ideological rivalry to the African continent using aid and foreign assistance to gain influence and mobilising African countries to fight their proxy wars. It is worth mentioning that the Soviet Union is remembered on the continent as having aided the decolonisation and liberation of some African countries particularly in Southern Africa. The marked withdrawal of Russia from Africa after the Cold War was a source of concern for some of its ideological friends on the continent. Today the growing interest of Russia is generating mixed feelings. In terms of trade and aid, it is not likely that Russia can match the Western powers that are increasingly developing and nurturing structures and platforms for closer ties with Africa as we have seen in many platforms for promotion of EU-African cooperation such as the Cotonou Agreement, with the EU, and the African Growth and Opportunity Act, with the US."