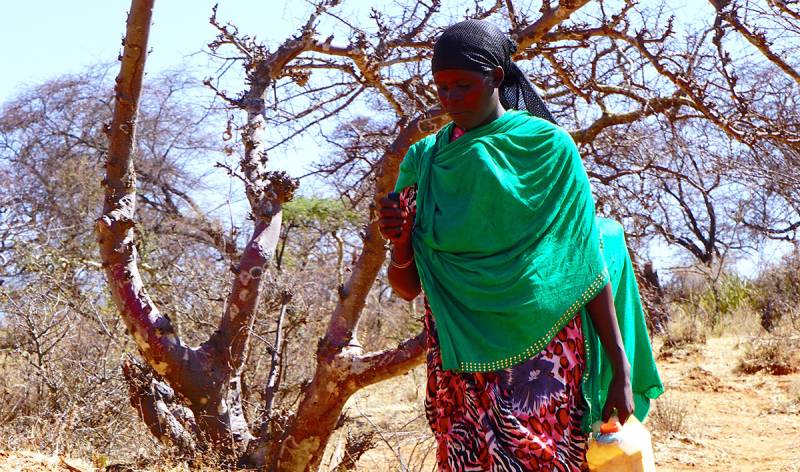 As Dhaki Faranjicha hikes to the nearest town to sell her milk, she uses a mobile phone to communicate with other women that may meet her on the way to sell their milk. Photo from Guradhere Kebele, Oromia Region, Ethiopia, by Robert Sauers, USAID Ethiopia, February 2015.

Over the last 15 years, Ethiopia has seen remarkable economic growth. The agricultural sector is part of this growth, but its proportional contribution to the overall economy has gone down. There is a need to transform Ethiopian agriculture, not least when it comes to the inefficient land laws that impede young people from investing in farmland. In a new policy note, researcher Atakilte Beyene gives recommendations on how this can be done.

In Ethiopia, the average total farm land area per smallholder household is 0.78 hectare. The average number of plots constituting a household farm is four. Since the start of the land redistribution programmes in the mid-1970s, the general trend has been towards smaller and more fragmented land plots.

“For decades now, agricultural reform programmes have emphasised the need for land consolidation and land accumulation among smallholder farmers. But no such trend has yet been observed”, says Atakilte Beyene, senior researcher at the Nordic Africa Institute.

The need for land reform

According to Atakilte Beyene, the today’s land tenure system is partly to blame for the land fragmentation. It impedes or prevents the long-term or complete transfer of land.

“Land leasing, for example, is only practiced for short periods of three years, on average, which makes it difficult for entrepreneurial farmers to plan and take loans for long-term investments”.

Atakilte Beyene advices policy makers to encourage a gradual consolidation of farms through long-term, or permanent, transfer of plots to farmers who are willing and able to invest. Gathering scattered land plots into larger production units would promote investment in improved technologies and methods.

The need for land reform is closely linked to Ethiopia’s demographic challenges. With 71 per cent of the population aged under 30, Ethiopia is a country of young people, who often have little or no opportunity to hold land of their own. And although Ethiopia has a proportionally bigger rural population than other African countries, there is a slow but steadily rising urbanisation trend.

“The expanding cities push up urban demand for major staple crops, which in turn raises the demand for greater production output from the agricultural sector, especially in peri-urban areas”, Beyene argues.

Atakilte Beyene also argues that the state has an important role in encouraging and helping farmers who wish to develop co-operatives based on industrial crops. For example, by guaranteeing minimum prices for a selected range of crops with industrial potential and through state intervention in the quality grading of farmer products.

"To break the smallholders’ dependence on arbitrary middlemen, the state should build regulations, appoint officials and design information systems that compensates for this imbalance,” Beyene argues.

To some extent, this is already being done today for some products, such as coffee, which is one of Ethiopia’s most important export products. Smallholder coffee farmers can have their beans graded by a public official and then, based on the grading, get money transferred straight to their bank account.

“This system has to a large extent wiped out the market for those middlemen who come to the farm gate and offer rip-off prices,” Beyene says.

This trend is fuelled by modern technology that helps improve smallholders’ access to markets. Through smartphone apps, toll-free phone-in services, and other trading services, such as the Ethiopian Commodity Exchange (ECX), they get updates on world market prices and connect with purchasers in the closest cities.

“However, this technique is not yet available for all crops and all regions. It needs to be further elaborated,” he says.

Land consolidation and smartphone apps are not the only answers to Ethiopia's agricultural challenges. In his policy note, Atakilte Beyene also gives advice on how new water management methods and support for co-operatives can reshape smallholder farming in Ethiopia. Here are his policy recommendations in short:

Atakilte Beyene, former Senior Researcher at the Nordic Africa Institute (NAI). His research is mainly focused on governance of natural resources, agricultural transformation and food and energy security – in Ethiopia, and also more broadly in East Africa and the Horn of Africa.