Personality before issues in Nigeria 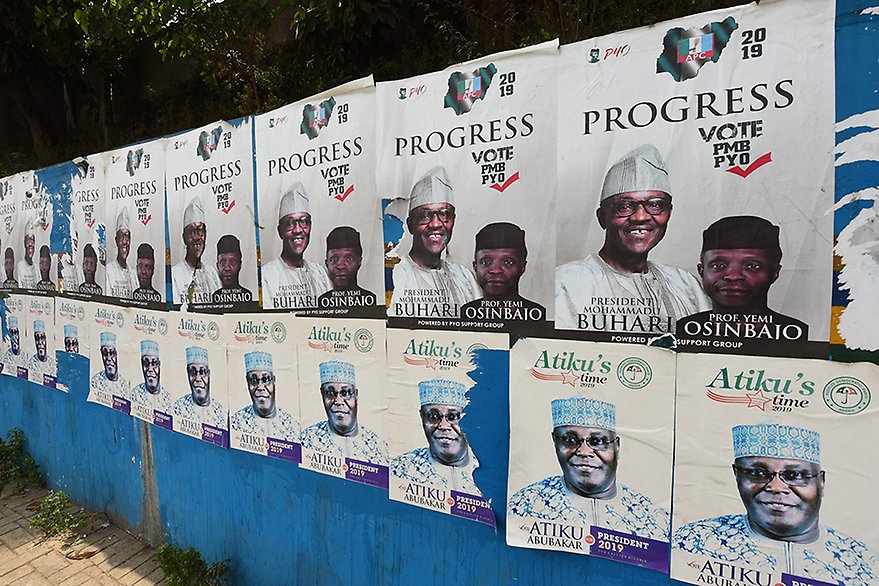 “Political power is very much centralised in Nigeria. That´s why everyone strives to be close to the winning candidate in the presidential election. This survivalist strategy has gained prominence. In addition, recent electioneering has focused less on issues and programmes, and more on personalities” – Victor Adetula, head of research at the Nordic Africa Institute (NAI), commenting on upcoming elections in Nigeria.

When Nigeria goes to the polls on 16 February, it will be almost exactly 20 years since the last military regime handed over power to a democratically elected government. The People´s Democratic Party (PDP) held power for 16 years, until 2015 when the current president, Muhammadu Buhari of the All Progressives Congress (APC), won. The PDP and APC are the two main contestants in this year´s elections, even though more than 90 political parties are running.

Historically, a candidate’s place of origin, religion and ethnicity have been important factors for consideration when Nigerians vote, according to Adetula. Buhari and his main rival, PDP candidate Atiku Abubakar, both come from the north, are Muslims and belong to the country’s Hausa-Fulani ethnic group.

“The thinking in some circles is that this trend will tend to reduce tension in the polity. This is only a possibility”, Adetula remarks.

The two dominant political parties have made strategic choices in nominating vice-presidents from particular ethnic groups to help attract those groups’ votes. Abubakar´s running mate, Peter Obi, belongs to the third-largest group, the Igbo, suggesting that in the next scheduled elections in 2023 an Igbo could be presidential candidate. Buhari´s vice-president is from the second-largest ethnic group, the Yoruba.

“In addition, the politics of ‘winner takes all’ further complicates things. People generally want to vote for the candidate most likely to benefit their ethnic group or region. It has to do with the extremely centralised system of power. Added to this is the client patronage system, which makes individuals or groups constantly seek an alliance with ‘the powerful centre’. In this context, anyone without contacts to the president and his cohorts risks being left without influence during the entire term”, Adetula remarks.

“It is very disappointing that after almost two decades electoral democracy hasn’t gone further than canvassing for votes on the basis of candidates´ personalities. Issue-based campaigning hardly exists. The only issue discussed is corruption, where the two sides cast blame on each other about who is more corrupt”, Adetula observes.

The 2015 elections were relatively peaceful, but elections before then had a history of being violent. Some observers fear unrest could flare up again. The country has its share of trouble. Militant Islamist group Boko Haram continuously terrorises the population in two of the northern states, even though Buhari in December 2015 declared the group had been defeated. In more than 20 of Nigeria´s 36 states, every year conflicts between pastoralists and farmers claim thousands of lives. Political agitation for an independent Biafra occurs regularly, and in the Niger Delta competition for oil wealth has fuelled violence, causing militarisation in the region.

“I don’t think we should cry wolf. The previous elections in 2015 went well – and let us hope these will, too. However, unresolved conflicts easily find expression during electoral competitions and tend to become more intense. In addition, in societies where many perceive themselves as socially and economically deprived, elites have a bigger chance of manipulating people”, Adetula notes.

Regardless of the outcome of the elections, tough times are ahead for Nigerians. The economy is particularly sensitive to oil price fluctuations, as more than 80 percent of state revenues come from oil. Moreover, according to the International Monetary Fund, 50 percent of all revenue goes to paying off debt, which means little is left to deal with other costs or development projects. At the end of 2018, Buhari warned that the state of the economy was not the best and that everyone should be ready to make sacrifices.

“As expected, the opposition capitalised on this and blamed the Buhari administration for the state of the economy. Putting the national economy on the right path has not been a very easy task. In addition, the government has had to deal with the daunting challenge of official corruption. Members of the international community have applauded some of the seemingly tough measures taken by the government to block leakages in revenues and incomes, in order to prevent further looting of the national treasury. However, at home the Buhari administration needs to do more to explain its policies and programmes”, Adetula concludes.

Nigeria has the smallest share of women in parliament in Africa

Only 5.6 percent of Nigerian parliamentarians are women. That is lowest number on the continent and Nigeria is ranked 144th out of 149 countries in the World Economic Forum’s Global Gender Gap Report 2018. It is a long way behind the leading country, Rwanda, where women hold 61.3 percent of seats in parliament.

“Numbers aren’t everything. A big of share of women in parliament does not automatically mean more gender equality. However, in the case of Nigeria the numbers are really low and an increase would be a first step towards women’s political empowerment”, says Diana Højlund Madsen, senior gender researcher at NAI.

Long years of military rule are considered to have been one factor that has inhibited gender equality in Nigeria. Military leaders seldom appointed women to high positions in the state. In addition, ‘femocracy’ or ‘first lady syndrome’ has characterised Nigerian politics, meaning a woman´s power depends on her personal ties or closeness to powerful men. This has led to the co-opting of women’s interests in Nigeria. According to Højlund Madsen, some interventions could lead to better political representation for women in Nigeria.

“A proportional electoral system benefits women and other marginalised groups more than today´s system of winner takes all. Another thing would be financial support for women who run for office, as standing as a candidate is very costly in Nigeria and requires economic backing. Gender quotas in other countries have proved to be an efficient way of raising the numbers of participating women and have in some cases led to more substantial changes, even though women are acting within the limits of party lines”, Højlund Madsen notes.

When Buhari won the 2015 election against Goodluck Jonathan, it was the first time an opposition candidate had become president in Nigeria. Buhari has a military background and in December 1983 led a military coup that made him head of state. He was himself deposed by a coup in August 1985 and imprisoned for three years. As a presidential candidate, Buhari lost the 2003, 2007 and 2011 elections to PDP candidates.

Abubakar was vice-president between 1999 and 2007. He later fell out with President Olusegun Obasanjo and was not nominated as presidential candidate after Obasanjo´s two terms in office, and Abubakar left the PDP. In 2014, he joined newly formed opposition party the APC, which won the elections in 2015. Two years later, Abubakar switched back to the PDP, and was nominated as presidential candidate for the elections 2019.