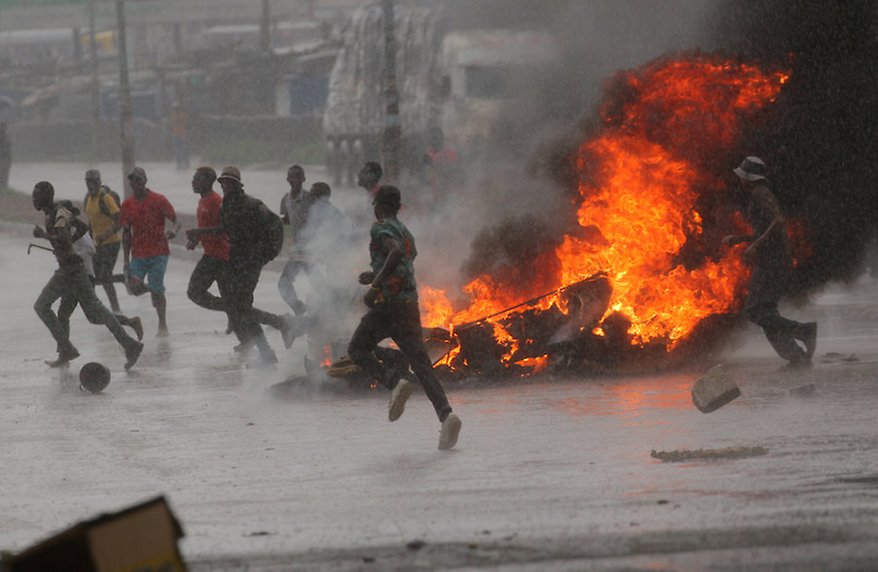 People run at a protest as barricades burn during rainfall in Harare, on 14 January. Photo: Philimon Bulawayo

The current crisis in Zimbabwe may play into the hands of President Emmerson Mnangagwa and strengthen his position within the ruling Zanu-PF party, according to Obert Hodzi, Zimbabwean scholar and former guest researcher at The Nordic Africa Institute.

Hodzi, now working at the University of Helsinki, returned from Zimbabwe last week, where he was visiting family in the capital Harare.

On 14 January he saw how Harare had completely shut down in response to a national “stay away” protest, which trade unions had called after the government announced a 150 percent rise in fuel prices.

“I went to town with my wife, who was going to apply for her passport. At around 10 am teargas was being thrown around. There was a group of young people running around, telling everyone to close their shops. Police would come chasing them around”, Hodzi says.

By the evening, all shops had been closed in and around the city, and there were rumours of violence in different parts.

They drove to a relative’s house in Chitungwiza, 30 km from Harare, to spend the night there before returning to Finland. However, supporters of the ruling Zimbabwe African National Union-Popular Front (Zanu-PF) party had barricaded the roads and were preventing people from going in or out. Hodzi says he saw protesters throwing stones at a local police station.

“When we finally made it to my relative’s house, we were told that it was safest to leave around 4 am.”

The 15 January was a day of violence, with soldiers and police going door-to-door in townships, beating or shooting protesters.

“They were especially looking for young and middle-aged men,” Hodzi says.

Hodzi, a political scientist and long-time observer of Zimbabwean politics, says that since Robert Mugabe‘s removal from power in 2017, the dynamic between the police, the national intelligence service and the military seems to have shifted in favour of the military.

According to Hodzi, the dynamics behind the current crisis are complicated. The “stay away” was initiated by the Zimbabwe Congress for Trade Unions with churches and civil society organisations. While not among the organisers, the main opposition party, the Movement for Democratic Change (MDC), has supported the protests, with senior members using social media to encourage people to stay home from work.

MDC leader Nelson Chamisa has called for the involvement of the African Union and Southern African Development Community. He has also called for dialogue with the president about a national transitional authority to stabilise the economy.

Hodzi believes that Mnangagwa is using the national turmoil to weaken his challengers within Zanu-PF. By blaming Chiwenga, who was in charge of national security during the “stay away” while the president was travelling abroad, Mnangagwa could weaken his opponent. Chiwenga is widely expected to challenge Mnangagwa for the presidency in the election scheduled for 2023.

Hodzi points to the unusual circumstance that Mnangagwa’s 2023 candidacy was discussed at the Zanu‑PF annual conference in mid-December 2018.

“It might have been a way to pre-empt him, to tell his challenger, ‘You are not going to be presidential candidate in 2023’”.

Hodzi says that Chiwenga’s handling of the “stay away” may have destabilized his positon within Zanu-PF and spoiled his image among the wider public, being seen as responsible for the deaths of protesters. However, Chiwenga has a strong position within the military and will not be removed easily, according to Hodzi.

NAI Senior Researcher Liisa Laakso says that while Zimbabwe’s immediate concern is the economic situation, the underlying problem is about political mismanagement and power abuse.

“For decades the strategy of Zanu-PF has been to protect its power by any means,” Laakso says.

She mentions atrocities committed in the early 1980s in the Southern part of the country in Matabeleland, where the other liberation movement party, Zapu, was popular. The violence ended only after Zapu was merged with Zanu.

Current president Mnangagwa was then head of the national intelligence organisation, she adds.

In the mid-1990’s when MDC won popularity in urban areas and within labor unions, Zanu-PF again turned to repressive means.

“Under Mnangagwa Zanu-PF is set to continue on the same path. A change of president has not changed the ways of the regime,” Laakso says.

Zimbabwean human rights groups say at least 12 people have been killed, at least 78 have been shot and more than 240 have faced “assault, torture, inhumane and degrading treatment” in a crackdown on protests that began on 14 January over a dramatic rise in fuel prices.

The Zimbabwe Human Rights NGO Forum in a statement also says 466 people have been arbitrarily arrested or detained in what it calls “massive” violations.

The statement says children as young as 9 have been reportedly tortured as security forces break into private homes.