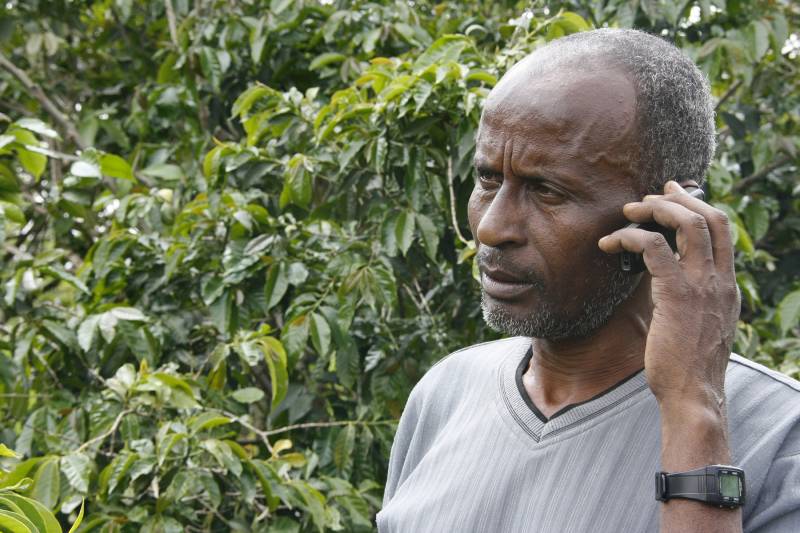 Coffee farmer Feleke Dukamo checks the latest coffee prices through his mobile phone – because he knows the price coffee is trading at, he can drive a hard bargain with his buyers. Photo: Pete Lewis, DFID.

For an effective transformation of self-sufficient farmers into commercial entrepreneurs, state policies for agricultural development need to adopt a more nuanced image of this diverse group.

Historically, state policies for agricultural development in Ethiopia have promoted top-down initiatives to boost production of industrial cash crops. They have frowned on smallholder, subsistence farming as old-fashioned and outdated, although about 70 percent of Ethiopians depend on it. Over the past two decades, however, things have changed.

“State policies have gradually given more recognition to the importance of smallholder farming in the fight against rural poverty. The transformation of Ethiopian agriculture into large-scale and commercial farming is no longer praised as the only way forward,” says Atakilte Beyene, senior researcher at the Nordic Africa Institute. 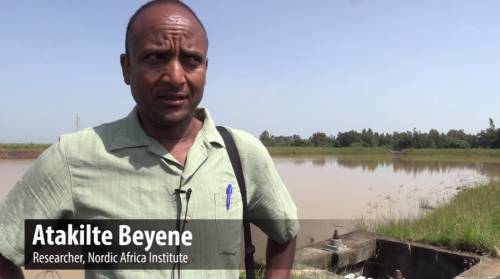 In a new book, Beyene and eight other rural development researchers from Ethiopian universities study this policy shift.

From a macroeconomic point of view, subsistence farming limits growth in Ethiopia. To supply an increasing population, the country needs farmers who are willing to move into cash crops aimed at emerging urban and industrial demands.

Successive governments of different political orientations have all recognised the need for agricultural transformation. Over the past 50 years, many reform programmes have been launched.

“They all tend to see smallholder farmers in a too narrow, too homogeneous way. To be successful, the reform programmes have to identify the different needs and capacities of different smallholder groups,” Beyene argues.

The case of teff

A successful state policy for agricultural transformation should be in tune with local traditions and cultural norms. The case of the indigenous cereal teff is illustrative. Archaeologist and historian Gedef Abawa has written a chapter in the book on why teff is so popular among subsistence farmers in north-west Ethiopia, although it requires hard work for a low yield, compared to more profitable crops such as wheat, barley or maize.

“Teff is heavily loaded with different sociocultural and ritual practices,” Abawa explains, pointing at a remarkable interdependence between this crop’s economic value and its deeply embedded symbolic meanings.

Policies need to address all aspects of the local economy, not just farming.

“People in rural communities engage in all kinds of economic activities to bring food to the table. They do construction work, petty trading, handicrafts and of course all kinds of domestic labour,” Beyene explains.

“This multi-occupational way of life has always been a part of smallholder economies in Ethiopia. But traditions and conditions vary a lot from region to region, and policies should be flexible and adjustable to this variation,” he adds.

Also, when it comes to supporting smallholder co-operatives, policies need adjust to the needs of different groups. Farmers who organise into bigger entities can more easily invest in, for example, technical equipment and warehouses. By joining forces, they also have a much stronger position at the negotiating table when bargaining over harvest prices, bank loans and insurance fees.

For co-operatives to be successful it is essential that they are based on voluntary, bottom-up initiatives.

“Agricultural co-operatives are not new to Ethiopia. In the 1970s and 1980s, there were many, but they were almost always the result of Soviet-inspired, top-down initiatives from the state, aimed at satisfying the needs of the state rather than those of the farmers. For co-operatives to be successful it is essential that they are based on voluntary, bottom-up initiatives,” says Beyene.

This does not mean that the state should be passive. On the contrary, it has an important role in encouraging and helping farmers who wish to develop co-operatives based on industrial crops; for example, by guaranteeing minimum prices for a selected range of crops with industrial potential and through state intervention in the quality grading of farmer products.

“There is an imbalance in power between smallholder farmers who bring their harvests to purchasing agents commissioned by global export companies or other strong actors. The middleman tends to underrate the quality of the products in order to press down prices. To break the smallholders’ dependence on arbitrary middlemen, the state should build regulations, appoint officials and design information systems that compensates for this imbalance,” Beyene argues.

Middlemen being wiped out

To some extent, this is already being done today for some products, such as coffee, which is one of Ethiopia’s most important export products. Smallholder coffee farmers can have their beans graded by a public official and then, based on the grading, get money transferred straight to their bank account.

“This system has to a large extent wiped out the market for those middlemen who come to the farm gate and offer rip-off prices,” Beyene says.

This trend is fuelled by modern technology that helps improve smallholders’ access to markets. Through smartphone apps, they get updates on world market prices and connect with purchasers in the closest cities.

“However, this technique is not yet available for all crops and all regions. It needs to be further elaborated,” he says.

Another issue is how to help entrepreneurial smallholders to make long-term investments and increase their land plots. According to Beyene, many of the limitations in today’s legislation date back to a land reform in 1975, when the Marxist-Leninist Derg regime nationalised all rural land.

“During the following three decades, land was redistributed among the farmers to achieve a fairer distribution of land. This land redistribution resulted in farm fragmentation and smaller land plots,” Beyene argues.

In Ethiopia, the average small farm size is less than one hectare, which could be compared with, for example, the average farm size in Sweden of 43 hectares. On top of that, many smallholder farmers have their land plots scattered out in such a way that it makes it difficult to invest in improved technologies and methods. Beyene recommends allowing farmers to lease land for longer periods.

“That way, older farmers who are no longer capable of farming can transfer their land to younger farmers. This can be done today, but only on short-term bases of three years at a time in average, which makes it difficult for entrepreneurial farmers to plan and get the necessary loans for long-term investments,” Beyene concludes.

An examination of Ethiopia's agriculture system, and the vitally overlooked importance of this component of development strategy for health and food security in the wider region.

Published by the Nordic Africa Institute and Zed Books in the Africa Now series.