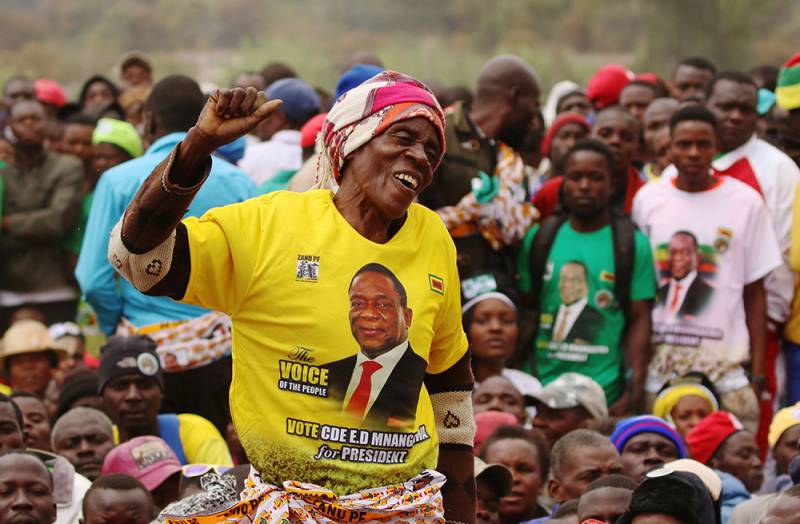 Limited changes to reassure the donor community and attract foreign investors – that’s how NAI researcher Henning Melber views political reforms in Zimbabwe that have taken place since a military coup last year. The outcome of elections on 30 July is predetermined, he says, as the generals controlling the ruling ZANU-PF party will not accept a defeat.

A dramatic week in November 2017 ended 93-year-old Robert Mugabe’s 37-year rule in Zimbabwe. The military leaders behind the takeover did not use the word coup. They called it a ‘presidential transition’, as Mugabe could no longer obey, uphold or defend the constitution. Emmerson Mnangagwa was sworn in as president several days after Mugabe’s resignation.

Since the so-called ‘soft coup’, the government has allowed greater democratic freedoms. People can speak their mind without risking persecution. They can meet in public as they wish and police controls at road blocks have been greatly reduced. Also, international observers will be able to monitor the elections. However, according to Melber these changes mainly serve the purpose of legitimising the coup and the election results in the eyes of the international community and private investors, who want to see stability and the rule of law.

“These new civil liberties should not mislead us. The military and so-called ‘securocrats’ are in firm control”, Melber states.

“The real strongman, however, is Vice-President Constantino Chiwenga who was previously the commander-in-chief of the Zimbabwe Defence Forces. President Emmerson Mnangagwa is the civilian face of this junta of generals”, Melber continues.

According to Melber, after Mugabe clearly lost a general election in 2002, the military insisted that he remained in office and forced him not to abandon the presidency.

“The military has since been controlling Mugabe from the shadows. Then he became senile and they could not trust him any longer. At the same time, Mugabe’s wife Grace seemed to become more influential over the aging president. This was a threat to the generals, who decided to remove him”, Melber says.

The coup leaders’ reforms have widened the democratic space in Zimbabwe, but this has actually weakened the opposition. Instead of one serious contender, 127 parties and 23 presidential candidates have registered to take part in the elections. The main opposition party is still the Movement for Democratic Change (MDC), but since the death of its leader earlier this year internal struggles have divided the party. Leading the major group, MDC-T, is 40-year-old Nelson Chamisa.

“It is said his young age will win votes from the youth. I doubt it. The old Robert Mugabe had his strongest support among rural young people. Moreover, people in the countryside depend on local authorities for their livelihood and survival and ZANU-PF is in charge of the local authorities. So rural voters will not change to the MDC”, Melber remarks.

Rather, many are likely to stay loyal to the ruling party. In April and May, the government negotiated with striking nurses and teachers and reached an agreement for salary increases to begin in July, just before the elections.

ZANU-PF can always count on support from its regional allies, no matter what. Angola, Mozambique, Namibia and South Africa also have former liberation movements in power.

“Nevertheless, I think the ZANU-PF government will continue to initiate minor reforms and even accept having a reasonably strong opposition in parliament. But if there were a serious contestation of power, have no doubt that the military would intervene”, Melber concludes.

The MDC was formed 1999 by members of the broad coalition of civil society groups and individuals who campaigned for a "No" vote in the 2000 constitutional referendum. The MDC Alliance is an electoral bloc formed between seven political parties. Most of the member parties are splinter groups from the original MDC, which was led by Morgan Tsvangirai, who died in February 2018. Nelson Chamisa will lead the MDC Alliance in the elections in July.

During the independence struggle in Zimbabwe, Mugabe's ZANU and Joshua Nkomo's ZAPU, fought Rhodesia's predominantly white government. ZANU recruited mainly from the majority Shona people, whereas the ZAPU had its greatest support among the minority Ndebele. In early 1983, ZANU began a crackdown on alleged dissidents. Over the next two years, government forces detained or summarily executed thousands of Ndebeles. Between 10,000 and 20,000 people were killed. President Mnangagwa was minister of state security at the time of the massacres.