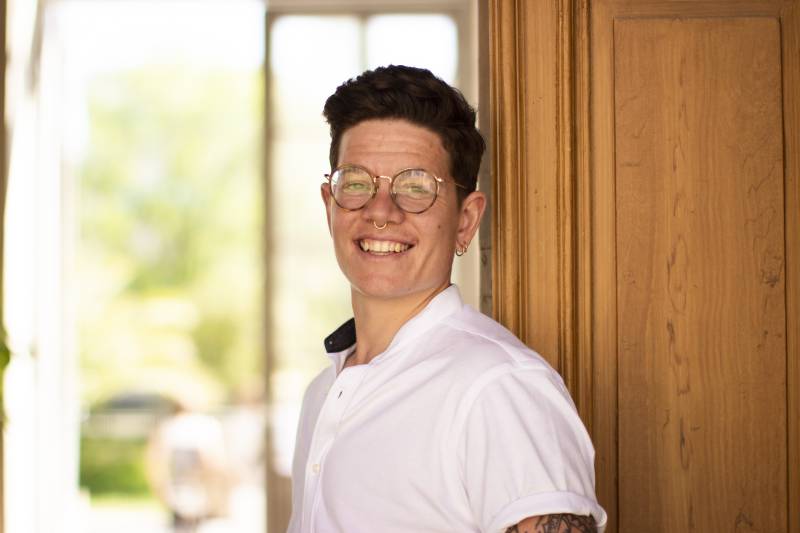 How states treat their weakest members tells a lot about the function of law and society, NAI guest researcher B Camminga says. Photo: Mattias Sköld

Transgender people are routinely exposed and questioned simply because they fall outside of perceived male/female gender norms. For transgender asylum seekers, this exposure can be dangerous. NAI guest researcher B Camminga is looking into the experiences of African transgender people seeking asylum in Europe.

“If you’re claiming asylum based on religion, political beliefs, even sexuality, you can walk into a room, speak to an asylum officer and walk out again, and no one on the outside will know their reasons for being there,” says Camminga.

However, when somebody is seeking asylum for reasons related to being transgender, then privacy can rarely be maintained since those reasons relate to their physical appearance.

Camminga, who identifies as transgender, is looking into what privacy means when a transgender person seeks asylum and lives out their transgender identity in a new country but also how information travels to and from the African continent.

“The articles were based on complete lies”, says Camminga and adds that it is not uncommon for transgender people to have their photos and personal information stolen, manipulated and re-published on the Internet.

Camminga knows from personal experience that people can be obsessive about finding out details about someone who identifies as transgender.

After Camminga had earned their* PhD, a respected Ugandan feminist and writer, Stella Nyanzi, posted an article online praising the research and its importance for LGBTQ people on the continent. However, the publicity also made the public take notice of Camminga.

“People just went nuts. There were pages and pages of comments with people wondering about what I was, what my parents had done to damage me. I got lots of email asking about my physical make up. In fact, the third most searched term for me on Google was ‘B Camminga sexual organs’.”

Camminga says that it was both humorous and shocking to realise how strongly people wanted to find out and make judgements about their physical details.

Apart from difficulties in protecting their privacy, transgender people often also have to fight the bureaucracy in the country where they seek asylum. For someone who presents themselves as “male” while holding a passport that says “female”, everyday life is full of obstacles.

Camminga has done extensive work on issues of transgender persons and migration, and has a book on asylum seekers in South Africa due to be released in November: Transgender Refugees and the Imagined South Africa: Bodies over Borders and Borders over Bodies

“Asylum is an interesting element of politics around gender and how the state understands a person claiming asylum. How states treat their weakest members tells a lot about the function of law and society. I think trans asylum seekers definitely are within the realm of the weakest members of our global society.”
Could improve lives of many
Camminga’s native country, South Africa, is regarded as progressive in terms of LGBTQ rights. It passed a law in 2003 which allows transgender and intersex persons to adjust their gender in legal documents.

“The law was seen as revolutionary at the time. You didn’t need to be on hormones or to have had any operations. You just needed two doctors to sign off on your gender identification.”

The right to adjust a document does not, however, include asylum seekers, who instead often find themselves in a bureaucratic nightmare. Camminga recalls cases where transgender asylum seekers in South Africa have been accused of fraud or have had to spend weeks in prison while authorities investigate their identity.

Camminga, who is driven by an ambition to improve the lives of trans people globally, says that it is time that governments started to think about how people are gendered in class rooms or when using public services.

“We need to start testing this out: if you want to get your rubbish collected, is it really necessary to mark if you are male or female?”

It is something that we have been doing, just like putting an individual’s race on documents, but it has become purposeless, according to Camminga.

“If we start to disrupt these binary systems, it can improve the lives of many, not just transgender people. As a feminist I think that is particularly important.”

*This article uses the singular gender-neutral pronoun they (them/their) to refer to a person who does not identify as he or she.

Hate crimes and state-sponsored violence against transgender people are common in many countries on the African continent and globally. However, comprehensive crime data is rarely available. Transgender individuals are often not seen as such, but rather as the extreme of visible homosexuality in many African states. As a consequence, in societies where homosexuality is suppressed, transgender people may fare even worse. More data can be found here.