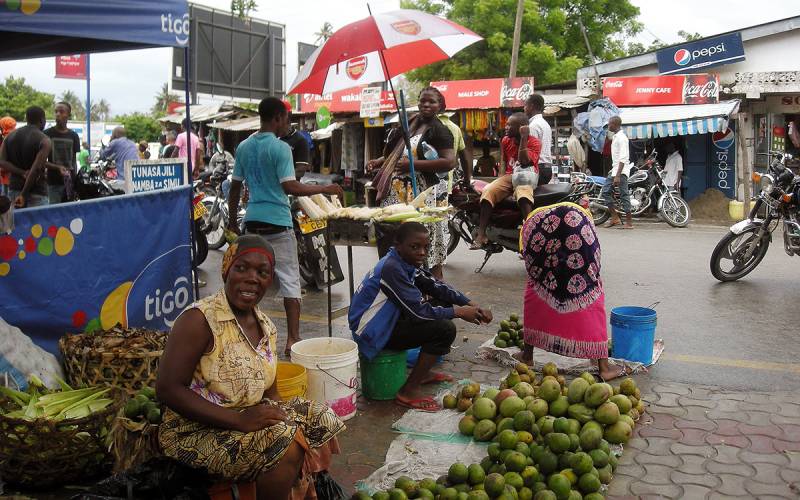 Street vendors at a market in Kigamboni, Dar es Salaam, where earlier plans for a large-scale New City Project caused anxiety among the residents.

Eko Atlantic City in Lagos, Cité le Fleuve in Kinshasa and Hope City in Accra. These are just a few examples of large-scale, ultra-modern urban projects in Sub-Saharan Africa that embody government aspirations of injecting energy into the national economy. But they often create tension among local residents. A new study explores one such initiative in Dar es Salaam.

In 2010, the Tanzanian government put forward an ambitious New City project for Dar es Salaam. A vast area in the coastal suburb of Kigamboni was to be redeveloped into a modern satellite city.

“The New City was to offer recreation parks, beach resorts, cultural facilities and international business centres equipped with modern technology. But among the local residents, the plans generated tension and anxiety,” says sociologist Jennifer Norström, one of the study’s three authors. The other two are Ilda Lindell and Andrew Byerley, both human geographers at Stockholm University and former researchers at the Nordic Africa Institute.

The study is based on interviews with urban planners, local residents and activists, conducted during Norström’s field work in Kigamboni in 2013. Among other issues, it looks at the participation of those local residents who were to be resettled or displaced.

“The responsible authorities claimed that the residents had been included in the planning process; but in reality, their awareness of the project was low and there was little or no dialogue between them and the authorities. A local committee, claiming to represent all residents of Kigamboni, was mainly concerned with issues of compensation for landowners with documented title deeds. The concerns of tenants and those with informal tenure seemed to be marginal, and women’s participation was very limited. Little or no consideration was devoted to the desires, knowledge and experience of the local residents,” explains Jennifer Norström.

Activities that sustained many residents in the area, such as farming, animal-rearing and street trading, had no place in the plans for Kigamboni New City. Instead the plans exclusively expressed the needs and desires of government officials and businessmen.

“The plans displayed some general features that are usually associated with neoliberal visions of urban development. There was a strong emphasis on economic growth and on attracting wealthy investors and multinational companies. There was also a heavy reliance on market-driven redevelopment. But this was not the only logic at work,” says Jennifer Norström.

Echoes from the past

The redevelopment plans were dressed up in a language of urban and civic improvement. Redevelopment was said to enhance the quality of life and of human settlements by bringing order to the “urban chaos”. By proposing a strict zoning that separated spaces and functions, the Kigamboni master plan had technocratic echoes of both the colonial and the socialist past.

“The great faith in the potential of modern town-planning techniques has its parallels in early colonial planning, when Dar es Salaam was divided into zones. At that time, the purpose was to enforce spatial segregation on racial grounds and to facilitate the acquisition of coastal land for government use. The intention to relocate and concentrate Kigamboni’s residents in specific residential areas also brings to mind the forced resettlements of ex-President Nyerere’s brutal villagization programmes of the 1970s,” says Jennifer Norström.

A state of uncertainty

In 2015, financial difficulties and corruption scandals finally brought the Kigamboni project to a standstill. But the redevelopment plans have not been abandoned, they are just being redrawn, so the residents in the area continue to live in a state of uncertainty about the future.

“A new master plan for Dar es Salaam seems once again to give prominence to high-profile projects, such as a Formula One racetrack. The plan has already generated considerable anxiety. Residents, in particular those dwelling in unplanned areas, are concerned that they will be evicted. Also land prices have rocketed, which potentially marginalizes the many residents who are dependent on informal rights to access land for their livelihood, but who have no documented tenure,” concludes Jennifer Norström.