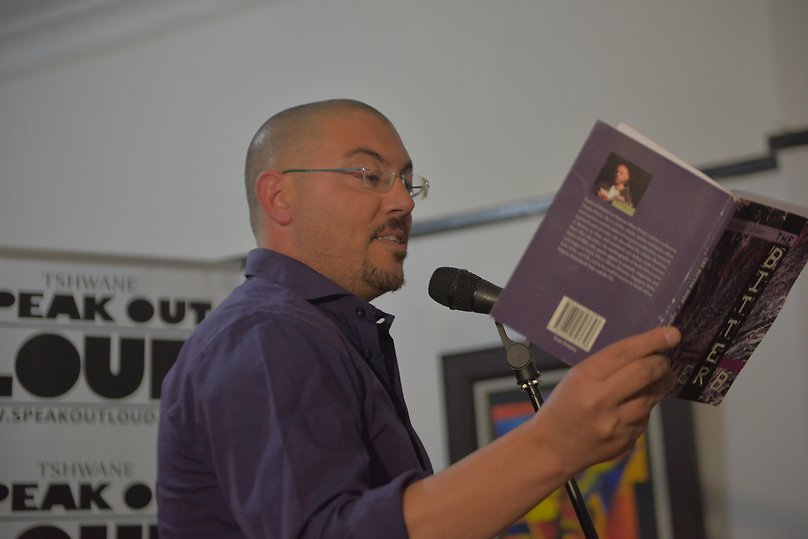 Come and enjoy young and exciting poetry from South Africa.

Free entrance, open for all!

A photo exhibition from Afrikagrupperna about the african diamant industry will be on display in the NAI Library.

Dr Raphael d’Abdon is a writer, scholar, spoken word poet, editor and translator. He holds an MA in Arts from the University of Uppsala (Sweden) and a PhD in Linguistics and Literary Studies from the University of Udine (Italy). He has lectured at the Department of English Studies at the University of South Africa (UNISA) and at the Mzansi Poetry Academy, and is an Honorary Research Fellow at the Human Sciences Research Council (HSRC).
In 2007 he complied, edited and translated into Italian I nostri semi/Peo tsa rona, an anthology of contemporary South African poetry. In 2011 he translated into Italian (with Lorenzo Mari) Bless Me Father, the autobiography of South African poet Mario d’Offizi. In 2013 he compiled and edited the collection Marikana: A Moment in Time, and was one of the featured poets at the “Poetry Africa” festival in Durban. He is the author of three collections of poems, sunnyside nightwalk (Geko, 2013), salt water (Poetree Publishing, 2016) and the bitter herb (The Poets Printery, 2018), and he has read his poetry in South Africa, Nigeria, Somaliland, Italy and the USA, where he chaired a session on spoken word and literature at the 2011 Chinua Achebe Colloquium.
His poems have been published in journals, magazines and anthologies in South Africa, Nigeria, Ghana, Malawi, Singapore, Palestine, India, Canada, USA, Italy, and the UK. He is South Africa’s representative of AHN (Africa Haiku Network), and he is a member of ZAPP (The South African Poetry Project) and IPP (International Poetry Project), two joint-projects of the University of Cambridge, UNISA and the University of the Witwatersrand, whose chief aims are to promote poetry in schools in South Africa, UK and beyond, and to instill knowledge, understanding and a love of poetry in young learners.

Emmah Mabye
What started in 2009, as a mere stress reliever has helped Emmah Mabye become a poetry firebrand.

“Through my powerful command of the stage, I bring poetry to life. Using the technique of creatively expressing everyday life, I take you to a world of solace, a point of inspiration and grant you an opportunity to challenge the status quo all safely within yourself. My work is a poignant expression of imagery that’s simplistic and engaging”. Emmah has had the great privilege of taking her works to poetry festivals, schools, corporate, churches, national radio, national TV, Poetry Africa and even performing for the Presidency at the South African Local Government Association (SALGA) 2016 National Conference.

In her first published poetry collection, Clocking In, Emmah journeys into man as a tripartite being - thus clocking into one’s spirit, soul and body - and doing so with her through poetry. The book is comprised of her poems over the past 8 years. Thus far, the collection has been well received not only in South Africa but also in Malawi, Zambia, Kenya and Canada and scooped an award at the first AfriCAN Authors Awards in 2018.

Under the South African State Theatre’s Incubator Programme, Emmah got to stage her first theatre production in 2017 also titled “Clocking In”. The reviews from audiences were testament to the power and voice that Emmah possesses on stage.

Masai Sepuru is a visual and a performing artist practicing in numerous disciplines of the arts including writing, painting, design and performing. He has performed in various slams winning two of the biggest slams in the country (Tshwane Speak out Loud and WordnSound) back to back making the only poet to have held both titles at the same time. He is also the first champion of the annual speak child slam competition . Masai’s poetry has made a mark on and off stage, he helps organize and give workshops with poetry organizations around the province like scribe rites and blue pulse, in addition because of his degree in performing arts technology he finds spaces and organizes poetry events around Pretoria with an organizations namely Poetoria and Black suburbia.

His passion for poetry has seen him being chosen to be part of the South African State theatre incubator program on which he created a showcase called ‘its all the sane’ adding to many other showcases that he has organized and was a part of, like Toxic with Kori Strange , Blurred lines and Poetoria Showcases with Neo Soul to name a few. He has head lined and showcased in Sessions like Hear my Voice, WordnSound, Black Labone, World of Words and Street poetry.

Ishmael Sibiya is a facilitator and events producer focused on the development of emerging artists within literature (Poetry/Spoken Word) and other art-forms.

Since 2013, Ishmael has facilitated multiple literary exchanges which has seen him lead delegations of writers and performance poets to Sweden and the United States of America. He has also hosted multiple delegations of visiting poets from various countries in South Africa.

Ishmael has conceptualized and produced the Tshwane Speak Out Loud Youth Poetry Competition and Festival for the City Of Tshwane. This project is one of the most rewarding literary competitions in South Africa at the moment, awarding more than R50 000 in cash prizes and international touring opportunities to young writers and performers.

Ishmael is the co-founder and Executive Director of Hear My Voice which is a literary non-profit organization focused on developing young spoken word artists as well as creating open and uncensored platforms for youth to express themselves through spoken word poetry.

Youth voices matter, and Ishmael Sibiya has made it his mission to provide platforms for young people to be heard far and wide.