The Future of Africa-EU Relations 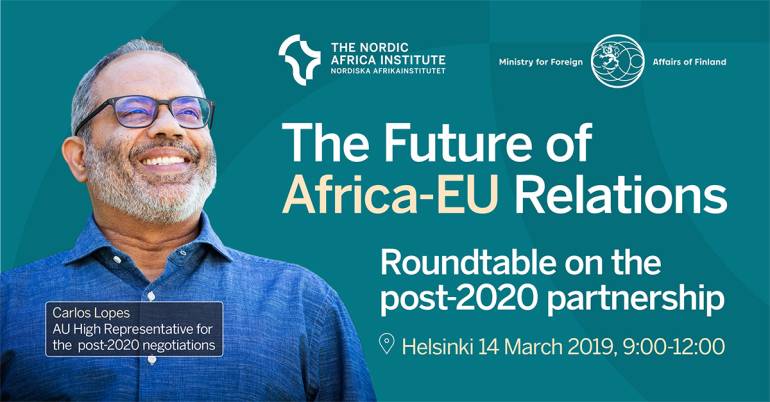 Finland will be serving as the President of the European Union during the second half of 2019 when the new post-Cotonou partnership agreement between the EU and the African, Pacific and Caribbean island states is to be concluded.

Organisers: The Nordic Africa Institute and the Ministry for Foreign Affairs of Finland

The event is all booked up, unfortunately we have no more places to offer!

As the key Africa knowledge centre for Nordic countries, the Nordic Africa Institute wants to widen the discussion of EU-Africa relations to Africa’s potential and challenges beyond Cotonou process. The institute invites stakeholders in Finland to take part in this discussion.

Professor Carlos Lopes, who headed for many years the UNECA and is currently the AU High Representative in the post-Cotonou process, will present an initial mapping of the partnership with insights guided by Africa’s interests and AU’s views on the process.

Many states on the African continent cannot complain about a lack of interest in their natural resources. China has emerged as a formidable singular player on the continent with the Road and Belt initiative increasing its engagement even further. The USA has positioned herself new, warning of a looming debt crisis exacerbated among others by loans from China. France has taken widely acknowledged new initiatives, especially with regard to the sensitive matter of restitution of artefacts stolen during colonial times. Leaders of UK and Germany have both visited African countries with their agendas to reactivate links to Commonwealth member states and to promote a so-called Marshall Plan for Africa respectively. European Commission President Jean-Claude Juncker has presented a comprehensive plan to deepen EU relations with Africa.

The current context and global geopolitical climate suggests that the further negotiations will have to carefully consider the overall environment to find the best possible forms of partnership and agreements between Europe and Africa. Following the longstanding, at times controversial negotiations over Economic Partnership Agreements (EPAs), this has already met reservations. The African countries would not want to give up the ACP alliance, Africa has more room to manoeuvre and is able to choose its future partners to suit best for its own interests. The EU will be measured against the honesty and fairness of the terms it can offer.

On the eve of the Finnish presidency, this roundtable would facilitate mutual understanding and new insights to foster constructive negotiations and mutually beneficial relations. The platform will give room for new initiatives for the process from Finland and other Nordic EU member countries that have been long-standing and close partners with the continent and its countries.