Colonial legacy, religion and politics – the roots of homophobia in Africa 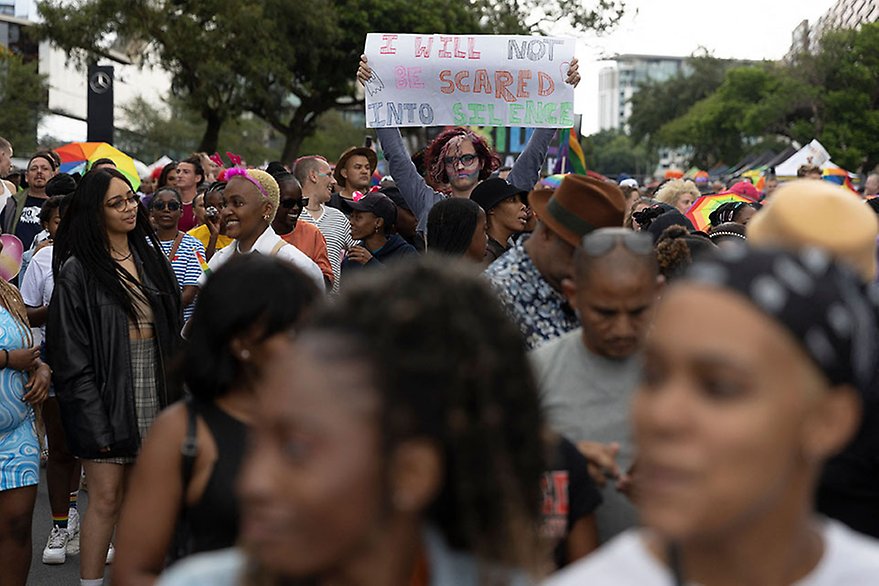 The Johannesburg Pride Parade, October 2022. Despite a warning from the US embassy of a possible terror attack, thousands of people gathered for the Pride march. Photo: Guillem Sartoria, AFP.

Africa today is by far the continent with the least legal support for LGBTI people. Only 9 out of 54 African countries offer some kind of legal protection. The three main reasons for this are the legacy of colonial laws, the role of religion and political homophobia, labelling homosexuality as “un-African”.

External link. against the human rights of LGBTI people has been reported by many for over half a decade. In 2021, increased experiences of discrimination

External link. were reported in the United States. In Europe last year, two shootings occurred outside and at LGBTI bars – one in Norway

External link. and another in Slovakia

External link. by a network of gay rights groups in Latin America and the Caribbean found that four LGBTI people are murdered every day in the region. Simultaneously, the opposition towards LGBTI rights amongst evangelical groups is growing, partly fuelling violence. In Asia, public opinions diverge

External link. substantially but, legal protections and recognition are generally lacking. In Africa, there is widespread violence against LGBTI people, low social acceptance, and 33 of the 69

External link. in Somalia, Mauritania, and northern Nigeria. Similarly, in Southern Nigeria and nine other countries, the punishment is 10 years to life in prison. Additionally, the politicisation of LGBTI issues has increased over the recent decade

External link., resulting in rising arrests of alleged gays and lesbians, and the introduction of legislation further infringing on LGBTI people’s rights and well-being in several countries. Accompanying these developments is widespread violence against LGBTI

External link. people and low social acceptance across the continent, with only nine, out of 54 countries, offering some kind of legal protection

In contrast, South Africa is the only African country, and one of eleven worldwide, to have constitutional protection for at least some gay and lesbian rights. It was the first country

External link. in the world to include protection from discrimination based on sexual orientation in its constitution. South Africa is considered the continent’s safe haven for queer people. Additionally, the first Pride event in Africa was held in Johannesburg in October 1990. It is today the largest Pride event in Africa and has adopted the name “the Pride of Africa

External link.”. One reason for the LGBTI rights movement and Pride being so strong in South Africa is its links to the anti-apartheid movement

External link.. They are considered not only celebrations of and demonstrations of equal rights, but also freedom of expression and freedom from social oppression

External link.. However, despite having constitutional protections and the longest history of Pride in Africa, many LGBTI people are still raped and murdered in South Africa every year, much due to widespread intolerant social attitudes

Homophobia and anti-LGBTI attitudes exist in every society and country on the planet. However, attitudes, perceptions, and levels of tolerance differ substantially. Three reasons for homophobia, of relevance to the dynamics in Africa, are brought to attention here. These are 1) the legacy of colonial law, 2) religion and 3) political homophobia. These explanations are not exclusive to Africa (or uniformly applicable to every context on the continent), but all three are present.

The legacy of colonial law

The consequences of colonialism have been far-reaching, also for legal systems. When European powers colonised Africa they imposed their penal codes

External link.. These included punishments for sodomy, ‘unnatural’ acts, and homosexuality. The major colonial powers in Africa were France and the UK, the latter being particularly committed to criminalising homophobia.

No anti-LGBTI legislation that pre-dates colonialism has been found. Historical and archaeological sources

External link. predating colonisation tell of a continent with a wide record of

External link. non-heterosexual and non-heteronormative sexualities and gender identities, including records of acceptance and purpose

External link., across Africa. Note that these relationships and identities might not fall within today's perceptions of queer or gay identity, or Western understandings of homosexual relations at the time of colonisation.

External link. show that colonial penal law has had significant effects on the legal rights and protections for LGBTI people. After independence, many African countries kept the colonial penal code. Research further indicates that countries colonised by the UK are more likely to have, and uphold, anti-LGBTI laws

External link., while countries colonised by France are less so. A reason for this is that France removed the anti-sodomy laws in the 1790s, while the UK removed the laws in 1967

Pray the gay away

The second explanation for widespread homophobia and anti-LGBTI attitudes is religion. Its impact on the LGBTI community is relatively well studied and research

External link. has found that higher levels of religiosity tend to result in higher likelihood to reject homosexuality, and by extension LGBTI people. The least accepting religions are Christianity and Islam, both dominant in Africa. When missionaries of these religions arrived, they condemned all non-heterosexual sex practices as illegitimate, deviant, and criminal

External link.. These perceptions have since been sustained through the high levels of religiosity across the continent

External link.. Most recently, anti-LGBTI attitudes from the clergy have been surfacing during the Covid-19 pandemic, with African religious leaders blaming the pandemic on the LGBTI community

External link., claiming the virus was caused by “their sins”.

A third explanation is political homophobia

External link.. The difference between homophobia in general and political homophobia is that the latter is used as a strategic tool to achieve political power or goals. Not least, political homophobia has labelled homosexuality as un-African. This labelling strategy, reiterated by politicians, religious leaders, and nationalists across the continent, argues that homosexuality, and other sexual orientations and gender identities, are Western imports destroying the African culture, values, and society. It is presented as Western cultural imperialism, imposing sexualities and values on Africans. Several African leaders are proudly declaring homosexuality to be un-African. Not least Presidents Museveni

External link., to mention a few. The aims linked to the use of political homophobia in Africa are often ways to divert attention from other issues such as the economy, development, corruption, elections, or other crises, like the Covid-19 pandemic