Gurnah invites us to understand, feel and mourn 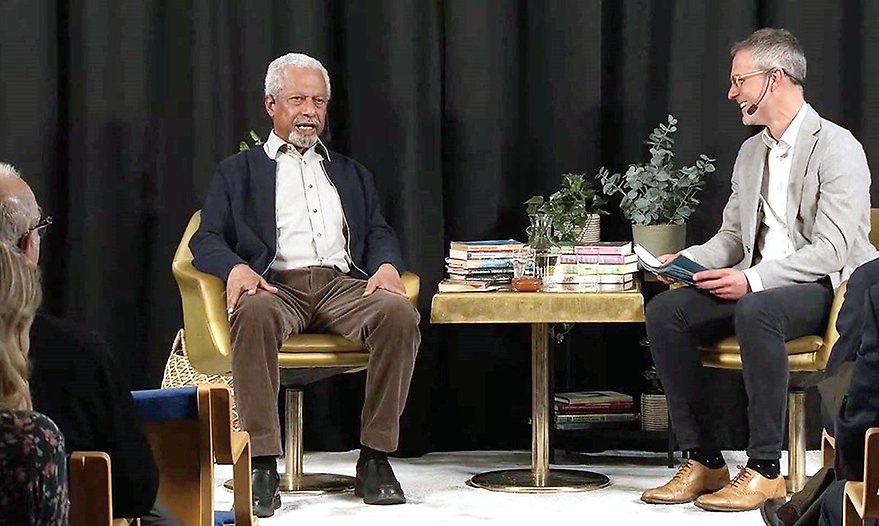 The livestreamed conversation between Abdulrazak Gurnah and Erik Falk was followed by an on-site audience of 75 and about 150 online viewers.

On 28 April the Nordic Africa Institute arranged as part of its 60th anniversary celebrations a conversation between Abdulrazak Gurnah as the Nobel Laureate for Literature 2021, and the former senior researcher at the Institute Erik Falk. Falk’s PhD thesis

External link, opens in new window. focuses in part on Gurnah’s work, and Gurnah had been visiting the Institute in January 2010. This had triggered publishing some of his novels in Swedish

External link, opens in new window.. The format of the conversation did not allow for some open discussion. But the exchange inspired some thoughts and comments, presented here as a kind of post-event reflections.

Gurnah’s introductory remarks centred among others around refugees and migration. His writings offer many individual stories of forced or voluntary re-location in different times and at various places. One of his novels is titled Desertion

External link, opens in new window., focusing as much as most of his other novels on multiple trajectories related to migration. Gurnah did not mention the word in this context. Is this not an adequate (by no means negative) category for decisions to move on and leave behind a setting in which one feels not comfortable and estranged?

The conversation also touched on aspects of family. It was suggested that the lack of family is an often-varied theme in Gurnah’s novels. But is this truly the case? After all, it much depends on the notion and definition of family. If it translates into protection and care, based on empathy, then settings of family are often described. Not for biological or genetical links, but because of hospitality and the ability to provide shelter for those in need of protection. That is kind of family too.

The protagonist Hamza in Afterlives

External link, opens in new window. experiences family-like care on several occasions in very different settings. It includes that of his German colonial officer, the Oberleutnant, who kind of adopted him as a substitute for his late younger brother and taught him German. The German missionary and his wife, who came to his rescue and saved his life, were kind of family too. So was the grumpy shop-owner Nassor Biashara, who ended Hamza’s odyssey by giving him as stranger the benefit of the doubt, offering employment. Finally, the merchant’s employee Khalifa, running the warehouse, provided him accommodation, which turned into home. They all resembled features of family, ultimately resulting in Hamza establishing a family himself.

Both, desertion and family, are core references in Afterlives. It ends with the tragic story of ‘Uncle Ilyas’, whose life displayed experiences of family as well as desertion. This final part is not fiction, but based on the life of Hussein (Husen) Bayume. He was one of the Askari soldiers in the German colonial army

External link, opens in new window., who afterwards moved to Germany. As Gurnah acknowledged in the conversation, due to committed scholarship, as well as post-colonial and other civil society activities (not least also by a growing number of Afro-Germans) there is growing awareness and public acknowledgement of the often untold, and still denied colonial legacy in Germany today. The fact that Bayume is recognised by a Stolperstein

External link, opens in new window. speaks to this.

But blind spots remain. The continued pitfalls of German colonial gaze bordering to amnesia were illustrated by the fact, that upon announcement of Gurnah as 2021 Nobel Laureate for Literature not one of his books was available in German. And while Afterlives was widely praised elsewhere, it was hardly acknowledged until then in Germany – despite the prominent location of large parts of the novel in German East African and the role of the Schutztruppe

External link, opens in new window. - “protection troop”, as the German colonial army and the Askaris were euphemistically called - in the narrative.

Between 1986 und 2006 six of Gurnah’s books were published in five different (with one exception all smaller) publishing houses in German translations. All were in October 2021 not any longer available

External link, opens in new window.. German media – almost as a kind of excuse – commented that Gurnah would also elsewhere be widely unknown. Meanwhile, Afterlives was widely acknowledged and praised in established English speaking media, among others in The Guardian

External link, opens in new window., and The London Magazin

External link, opens in new window.. Even a first article in the established and widely recognised magazine Der Spiegel disparagingly declared him to be a hardly known author and downgraded the Nobel award into a recognition of “identity politics

External link, opens in new window.”. Somewhat fittingly to such ignorance, the original article – later corrected – misplaced Zanzibar as an island at the coast of Kenya.

It is noteworthy that Afterlives contrasts with such Eurocentric arrogance of a somewhat still paternalistic and patronising colonial gaze. After all, the main protagonist Hamza, who acquired reading and writing skills in German while serving in the Schutztruppe thanks to the patronage by his German officer, uses a quote from a poem by Schiller (from a book he received as a gift from the officer) to declare his love to his later wife Afiya. – How much more cross-cultural and cosmopolitan can it get? The author’s own universal perspectives and empathy could not testify more to the discrepancy between true humanity and the mental imprisonment of white supremacy when he declared already years before in an interview with the Stuttgarter Zeitung: “I cried when I read for the first time aged 15 Anna Karenina, though I did not know anything about Russia of the 19th century. Tolstoi writes about human feelings, which can be understood by all.” – This, at least, was quoted in another article by Der Spiegel

External link, opens in new window.. As it added, Gurnah therefore would not bother to explain his readers the places and cultures, which might appear strange to a Western audience.

Gurnah offers an interwoven tapestry of individuals, cultures, and times, sometimes loosely, often more directly (despite some detours) connected. Crossing boundaries in search of new homes (and families), both mentally as well as physically. His narratives display a microcosmos which illustrates that cosmopolitan lives can take place within a region. They thereby transcend the Eurocentric notion of cosmopolitanism, also discussed during the conversation in some detail. It is for all of us to decide if we are willing to accept Gurnah’s invitation to understand, feel and – where necessary – mourn.