The United Nations Security Council has the primary responsibility for upholding peace and security in the world. Its agenda reflects the world’s biggest fires that need to be extinguished. When holding the monthly rotating presidency, both Kenya in October and Mexico in November 2021 dedicated signature events to highlighting one conflagration in particular: the proliferation of small arms and light weapons (SALW). Mexico highlighted the threat to international peace and Kenya convened a briefing on illicit SALW and their impact on peace support operations. What makes this topic so prominent on the global agenda for peace and security, and what puts Africa in the spotlight?

The Vicious Cycle of SALW: Instability Wherever They Are

Small arms and light weapons (SALW) can be carried and used by a single individual (small arms) such as handguns and semi-automatic weapons; or are heavier, but portable by a small group of people (light weapons) such as various types of machine guns, grenade launchers and anti-tank missiles. The category also includes land mines, ammunition and other explosives.

The key distinguishing feature of SALW is that they are easy to use and to carry on foot. Africa struggles with the negative impact of small arms and light weapons. Since small arms outlive most human beings, they have been a long time on the continent. They are often brought illegally into African countries and can remain in circulation by governments, non-state actors and arms traffickers for many decades and across different conflicts. Organized crime combined with the transfer of illicit weapons not only provides leaders of irregular armies - so-called warlords, or bosses of criminal networks with ammunition but also lets financial resources flow into their coffers. Permissive laws in manufacturing countries do not alleviate the problem either. The illicit transfer, misuse and accumulation of SALW are drivers of insecurity and instability.

Moreover, the relationship is mutually reinforcing; increased instability is a prosperous environment for SALW proliferation. The struggle for political power and ungoverned spaces increases the demand for illicit SALW by individuals. Demand is further driven by economic marginalization and a lack of opportunities, common characteristics of unstable environments. Once in the hand of civilians - data

External link. from the Small Arms Survey suggest that around 70% of firearms globally are civilian-held - the proliferation is both a cause and effect of pre-existing or emerging cultures of violence. A deeply ingrained culture of violence is indeed a complicated matter for conflict resolution or prevention, let alone building positive peace.

They may be small and light. But that is exactly what makes them more dangerous, especially when placed in the wrong hands. By their very nature, small arms are easy to acquire, easy to use, easy to transport and easy to conceal
Ambassador Kimani, Permanent Representative of Kenya and UNSC president for October

External link, opens in new window. during a Council meeting on 6 October 2021

Uncontrolled proliferation, ammunition and explosives are one of the biggest challenges of today’s peace support operations. It is no surprise that Kenya, an African non-permanent member state in the UN Security Council during 2021-22, brought the topic of peacekeepers and SALW to the Council chamber in New York. Half of all current peace support operations and 82% of all peacekeeping personnel are deployed to Africa

External link, opens in new window.. Peacekeepers operate in contexts where illicit flows of SALW are omnipresent. This not only undermines arms embargos but also endangers peacekeepers, humanitarian workers and the local population alike.

A report by the UN secretary-general

External link, opens in new window. suggests that for 2020, five civilians per 100,000 people were killed in armed conflict, and the most prominent cause were small arms and light weapons (27 per cent) followed by heavy weapons and explosive munitions (24 per cent). The fatalities of blue helmets have been on a slight rise since 2005

External link, opens in new window.. For the peace support operation in Mali, MINUMSA, improvised explosive devices account for nearly 60% of UN fatalities while the other 40% can be attributed to small arms and light weapons, according to a Small Arms Survey briefer to the Council in October 2021 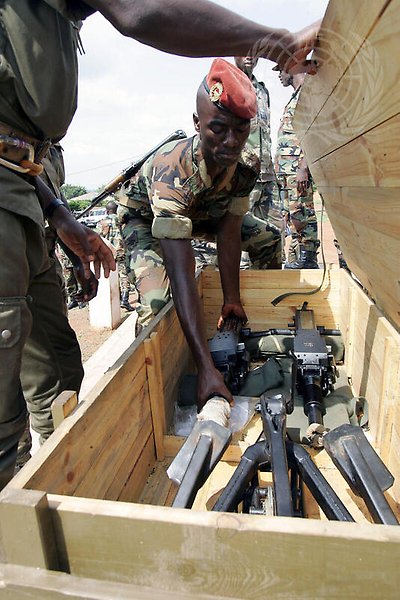 The peacekeepers’ mandate has considerably expanded and evolved over time from simple cease-fire observations in Cold War-era conflict contexts to complex multidimensional missions with military, police, and civilian components. The control of arms embargos and illicit arms flow, disarmament and demobilization are standard tasks in today’s peace support missions. UN Blue Helmets are sent out to be part of the solution. However, in marginal cases, errors by peace support missions are also part of the problem. For example, inadequately saved stockpiles or poorly deactivated small arms and ammunition can fall into the hands of illicit groups and contribute to their armed capabilities.

While the diversion sustains conflict dynamics and enables the emergence of new armed actors, it also forces peacekeepers to concentrate on stabilization tasks. International efforts often lack adequate funding and thus, human and financial resources are allocated to where it is needed the most. If less funding flows to controlling the illicit flow of SALW, the blue helmets could use more resources to strengthen trust among communities and help restore the economy, that are crucial conditions for creating an environment conducive for long-term positive peace.

Interrupting the Flow of Illicit Arms and Weapons

The threat of small arms and light weapons is recognized on a global and regional level. Mexico’s and Kenya’s efforts in the UNSC are illustrations thereof. On a global level, the Firearms Protocol, the Arms Trade Treaty and the Agenda for Disarmament are only a few examples of political and legal instruments. In 2013, the African Union agreed on a Strategy on the Control of Illicit Proliferation, Circulation, and Trafficking of Small Arms and Light Weapons and a corresponding action plan. The plan aimed to strengthen the sub-regional efforts by designating national focal points and a steering committee on SALW. The same year, the African Union set out the initiative “Silencing the Guns in Africa by 2020”, a flagship project

External link, opens in new window. of the socio-economic roadmap “Agenda 2063”. The initiative aims at nothing less than silencing all guns on the continent and ensuring that the next generation is free from the burden of conflict.

However, weak institutions, the lack of national initiative and funding are often too high hurdles for meaningful change. Indeed, due to their everyday use, it is more difficult to regulate SALW than weapons of mass destruction for example. Often, the legal instruments are there but lack national implementation, especially in fragile contexts where the proliferation of SALW flourishes the most. Stopping the supply chain at its beginning is not an easy task either. Even though 110 states ratified the arms trade treaty that regulates the contexts in which arms can be traded, manufacturing countries’ control of where their weapons end up is often too lax. As so often, where there is money, there is a way, and surprised faces by politicians when their countries’ manufactured weapons are found on a battlefield in Africa.

The proliferation of SALW is a cross-border issue. The use of the “darknet” and online availability is a growing concern since the use of postal delivery services allows for anonymity. The solution lies in interrupting the supply chains between legality and illegality. The key actions are tracing and marking weapons because the identification of illicit material allows the detection of leakages in the supply chain. Peacekeepers do play a role in tracing illicit flows. They have first-hand access to information in conflict areas and work with data collection tools to identify and mark illicit material. These efforts should be further strengthened, especially when it comes to the pre-deployment training or the creation of specialized units for this task. Sharing the information with other UN organs and civil society is then crucial so that a complete picture of the supply chain emerges. Only then can the international community adopt the appropriate measures and hold the responsible actors accountable.

From Silencing the Guns to Cultures of Peace

The proliferation of small arms and weapons continues to undermine peace efforts in Africa. The legal and political instruments are there, but there is a need for better implementation and holding actors – including manufacturing countries – accountable. Despite all criticism that the blue helmets receive, they can, and do, play already a part in extinguishing the fire that the proliferation of SALW in Africa sets. Nonetheless, if the chain of illicit flow of small arms and light weapons can be interrupted, fewer blue helmets are needed, and those remaining can reorient their resources to other peace support priorities. Eventually, it is important to keep in mind that the end goal is not only silencing the guns but creating a positive notion of peace: A prosperous African continent of peaceful co-existence, free from cultures of violence.