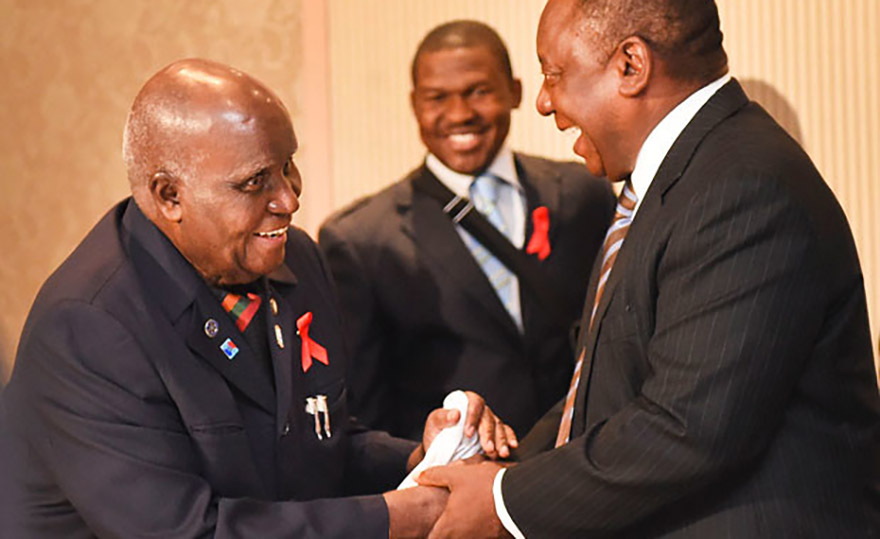 Kenneth Kaunda and then Deputy President Cyril Ramaphosa during the Champions for an AIDS-Free Generation meeting in 2015. Photo: GCIS

Kenneth Kaunda, first president of independent Zambia, died on 17 June. Like most of his peers, Kaunda embodied the ambiguities and contradictions of a generation leading the struggle for self-determination, human rights and democracy against an oppressive colonial regime, who once in power reproduced some of the repressive features to maintain control, writes NAI Senior Research Associate Henning Melber.

One of the last of the first generation of African nationalists leading their countries to Independence has left this world. On 17 June Kenneth Kaunda (fondly dubbed KK) died age 97 in a Lusaka hospital of pneumonia. Like others – such as Kwame Nkrumah, Sekou Touré, Leopold Sedar Senghor, Yomo Kenyatta, Julius Nyerere, and Seretse Khama - he personified the “winds of change”, which since the late 1950s swept across the African continent. His peers also included leaders of the ongoing anti-colonial struggles in Southern Africa: Agostinho Neto, Samora Machel, Joshua Nkomo, Robert Mugabe, Nelson Mandela and Oliver Tambo as well as the still alive Sam Nujoma.

From 1964 to 1991 president of Zambia (the former Northern Rhodesia) as a “front line state”, KK was willing to practice solidarity with the continued struggle against white minority rule in the neighboring countries. This came at high costs and sacrifices for his own country and people, subjected to destabilization and military attacks by the Rhodesian and South African forces. In the 1970s Lusaka hosted the Liberation Centre as a headquarter for the anti-colonial movements. Zambia also provided sites for camps. This was not free from dilemmas. KK as a follower of Mahatma Gandhi’s non-violence was at pain to deal with the bloody internal power struggles in some of the organizations, as he confirmed in a conversation with Tor Sellström for the Nordic Africa Institute’s volumes on Nordic support to the liberation struggles

Like most of his peers he embodied the ambiguities and contradictions of a generation leading the struggle for self-determination, human rights and democracy against an oppressive colonial regime, who once in power reproduced some of the repressive features to maintain control. Under his presidency, all other parties were banned. Zambia was turned into a one-party-state in 1972. Opposition movements (such a student protests) were facing severe intimidation.

But KK, guided by a strong Christian belief, was not the stubborn autocrat like some fellow nationalist leaders. He entered the “hall of fame” not only for his brand of African humanism

External link, opens in new window., but mainly for gracefully accepting defeat at the ballot boxes. After growing opposition, he allowed democratic elections, which he lost in 1991. He then vacated office in style. As another exceptional display of his ability to face realities, he had publicly announced in 1987 that one of his sons had died of AIDS

External link, opens in new window.. While others in the region remained for years in denial, he openly campaigned to fight the pandemic.

Many thoughtful obituaries testify to his ambivalent legacy deserving a fair tribute: for the Daily Maverick

External link, opens in new window. he was a “flawed giant who squared up to colonialism and Aids”; the Irish Times

External link, opens in new window. applauded a “philosopher king who fell with dignity” ; and The Round Table