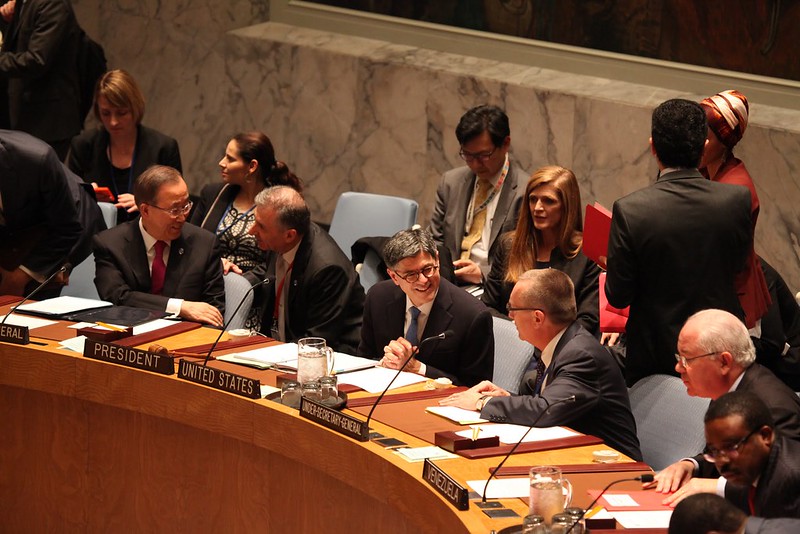 Often, observers comment on Africa’s limited authority on the Security Council, since no African state has permanent membership. Photo: US Dept of the Treasury

The UNSC’s preoccupation with Africa is evident across the multilateral institution’s repertoire. In 2019, an estimated 64 percent of Security Council conflict situations and 53 percent of UN peacekeeping operations were on the African continent, according to NAI researcher Angela Muvumba Sellström’s review of UN annual reports.

African power in the Security Council, however, is limited. The imbalance can partly be explained by the UNSC’s organisational model, which mirrors the geopolitical situation at the end of World War II when the United Nations was founded. The Security Council’s five permanent members (P5) are made up of the victorious WW II allies – the United States, United Kingdom, France, Russia (then the Soviet Union), and China. They exercise tremendous influence in Africa, some in part due to their former colonial ties, but all because of their trade, aid and military relations on the continent, according to Muvumba Sellström.

Often, observers comment on Africa’s limited authority on the Security Council, since no African state has permanent membership. And given the power of the P5 inside and outside the Security Council, African member states’ direct power is tenuous, according to Muvumba Sellström, who is running a research project aimed at deepening understanding of UNSC decision processes that concern Africa. 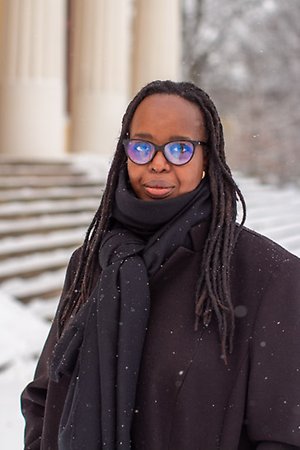 By illustration, she considers the differences between the United Kingdom and Kenya. Even if the two countries hypothetically were given the same formal role and power in the UNSC, and if their economic resources were levelled, the UK would still be the more influential of the two, due to the institutional capacity and knowledge the British foreign ministry and its permanent representation in New York has built up for decades.

“Those are the sorts of things that are interesting to me”, she says.

Previous studies on the UNSC and Africa have typically focused on the permanent five, or the relationship between the African Union and the Security Council. Muvumba Sellström aims to conduct a case-by-case review of the performance of six non-permanent UNSC members – four African and two Nordic – in terms of their impact on peace and security in Africa.

“This is a new frontier of research. Most existing research on the UNSC has looked at the permanent five, or the Security Council as a whole and resolutions and outcomes for particular conflict situations. Instead, we want to put the elected members of the Security Council (the E10) at the centre and understand whether and if so how Kenya, for example, was really able to gain support for a perspective that came from the ground, from Africa, on a conflict matter.”

The inclusion of Nordic countries in the study has to do with their vested interest in a more effective and inclusive multilateral system with a UN that is capable of building and maintaining peace, according to Muvumba Sellström. The Nordic countries are ‘believers’ in the UN, who frame the UN as a core institution for their own foreign policy objectives and national interests, she says.

“Nordic countries have collaborated with African countries, in the decolonisation process and anti-apartheid movement. They have also seen themselves as being outside the dynamic of the powerful Western powers, UK, US, France on one side, and Russia and China on the other”, Muvumba Sellström says. 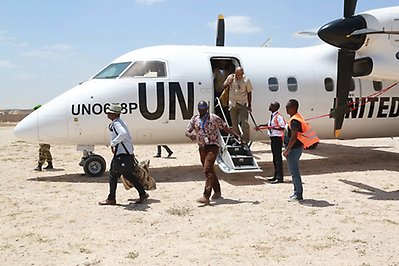 Officials from the United Nations Headquarters and the African Union Peace Operations Support Division arrive in Jowhar, Somalia on 12 March 2019. The officials were on a visit to Somalia review the progress made by AMISOM in the implementation of its mandate. Photo: AMISOM

As elected UNSC members the Nordic countries have also, like the African countries, called for a more equal distribution of work in the Security Council, for example in the case of the important ‘penholder’ duty, to lead informal and formal negotiations about a particular situation before the Council and to draft resolutions, which mostly is performed by France, UK, or the US.

However, Muvumba Sellström stresses that her project does not address the question of reform of the UNSC organisation.

“I take it as a starting point that the Security Council is not necessarily going to be reformed for many years, and even when it is, it may not lead to the addition of an African permanent member.”

Instead, she says, her project aims at providing knowledge to support more effective and inclusive UNSC work on Africa.

The project: Africa & the UN Security Council: Navigating the Inequality in Multilateral Conflict Prevention and Resolution?