Seven reasons to keep your eyes on Africa in 2021 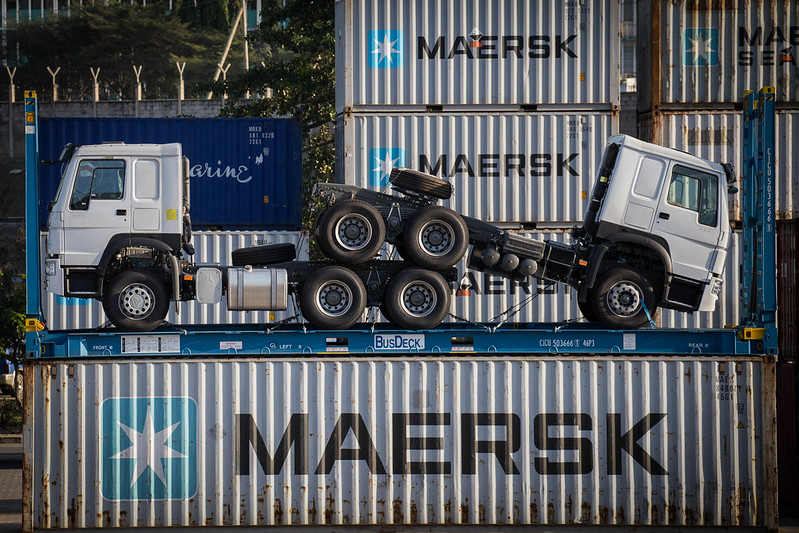 We asked the NAI researchers what they will be keeping their eyes on in 2021. 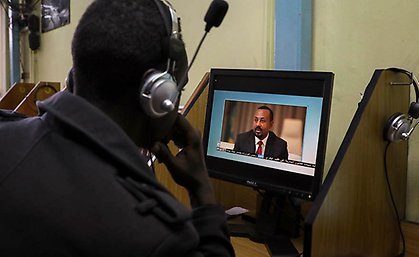 An Ethiopian streams a video of Prime Minister Abiy Ahmed, at an internet cafe in Addis Ababa. Photo: Samuel Habtab/AP

The conflict in Ethiopia’s northern Tigray region can still go in different directions. The worst-case scenario is if the conflict continues and even spreads to other parts of the country, NAI researcher Redie Bereketeab says.

“The military operation seems, however, to be largely completed. Now it depends on whether the Tigray People’s Liberation Front (TPLF) has enough support among the population in Tigray to go back to the old way of guerrilla warfare. But it also depends on how the federal government move on from their military victory and what will be done to integrate people in Tigray. If [Prime Minister] Abiy Ahmed properly addresses the grievances of the people in Tigray and deals with human rights issues, it could lead to peace and security in Ethiopia, and also stability in the whole region”, Bereketeab notes.

Neighbouring countries would seem to prefer a defeated TPLF, according to Bereketeab. Somalia holds the Tigray party responsible for Ethiopia’s invasion in 2006. Building a closer relationship with Ethiopia would be possible with the TPLF out of the picture. Likewise, ever since the government was replaced in Sudan, a former TPLF ally, the new leaders have sought closer ties to Abiy. A peace agreement between Eritrea and Ethiopia had one unresolved border issue that the TPLF was blocking. With the Tigrayan party out of the way, implementation of the agreement can be completed.

“The region could benefit from an Ethiopia without the TPLF in power. But the most pressing issues are domestic ones. The 2021 elections will be decisive for Ethiopia´s future. Will it mean steps towards a pan-Ethiopian structure or will current ethno-federalism prevail? And of course, the people of Tigray will have a chance to say what they want at regional and national elections”, Bereketeab says. 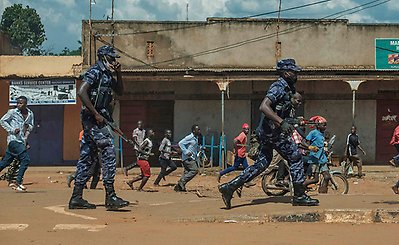 2. After Covid-19 clampdowns – will people stand up to repressive leaders?

In Uganda, President Yoweri Museveni has made full use of Covid-19 restrictions as tools against challengers in the upcoming 14 January elections. The widely reported arrests (twice) of musician-turned-presidential candidate Bobi Wine, who is accused of holding political rallies in violation of coronavirus regulations, are far from being the only examples.

“Actually, the whole electoral process has been shaped by measures with reference to Covid-19”, says Anders Sjögren, researcher at Uppsala University who runs a research project on contested elections

Uganda’s Electoral Commission declared the 14 January vote “a scientific election”, where public rallies are held under restrictions, and candidates instead are instructed to make use of media, whose operations are directly and indirectly influenced by the government, to get their political messages out.

“There are so many ways in which restrictions linked to the pandemic work against the opposition”, Sjögren says.

However, many opposition and grassroots movements across Africa have also grown stronger since the start of the pandemic, notes NAI Senior Research Associate Henning Melber.

“We see this in South Africa, Namibia and Zimbabwe where regimes had introduced very harsh Covid-19 measures. The pandemic brought to the fore repressive tendencies vested in the police and military, which provoked reactions against what protesters saw as characteristics of a police state.”

Whether leaders or people get the upper hand in 2021 may depend on the fear factor, according to Melber.

“Will people keep quiet out of fear? That’s not necessarily the case. Those who dare challenge the system can expect more popular support than in the past. So there has been a shift in the political contestations. If it is substantial enough to achieve fundamental changes, remains to be seen.” 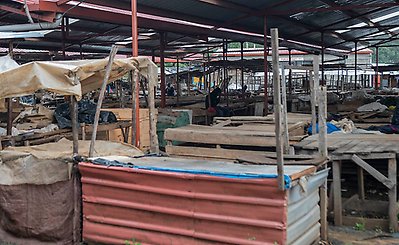 Several African countries face rapidly growing budget deficits, which have accelerated due to the economic effects of the Covid-19 pandemic. Economic shocks such as falling commodity prices on the world market and the collapse of the tourism sector have not only slowed down economic growth but also affected the fiscal situation in many African economies. Emergency lending from the IMF has temporarily resolved the situation, but other measures will be necessary, according to NAI researcher Jörgen Levin.

“A country can raise its revenues by increasing taxes, but it´s not easy to do immediately. A second option is to cut expenditures, which is never popular but is still necessary. Possibly, donor funding could cover or reduce the effects of budget cuts. But as governance has deteriorated during the pandemic, donors are becoming wary”, Levin points out.

Even before the pandemic, several African countries were in debt distress and Zambia had to cancel repayments at the end of 2020. A large part of Zambia’s debt is to private investors holding Eurobonds. These loans are more difficult to write off or renegotiate compared with loans from the IMF or World Bank.

“Debt is linked to growth. That is why the pandemic has put these countries in a tight spot. If we see a fast recovery, the debt burden will ease and states will have more space to take measures to restructure the economy”, Levin explains. 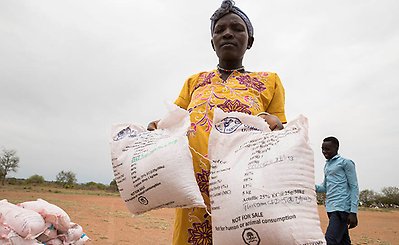 In the coming six months, East African populations face the risk of worsening hunger. Currently, about 29.5 million people in the region are food insecure. It is important to follow what measures governments and international agencies take to prevent further food shortages, according to NAI researcher Shilpa Asokan.

“In addition, people fleeing from the conflict in Ethiopia to neighbouring Sudan face the high possibility of ending up in a famine situation. In the midst of this chaos, it is important to stay focused on building the resilience of vulnerable communities”, Asokan remarks.

Current La Niña conditions have reduced usual levels of seasonal rains in most parts of East Africa. According to the World Meteorological Organization, this could last until May 2021. When rains fail, harvests fail — and when there is little agricultural output, food prices skyrocket. This same phenomenon happened in 2010–2011, when 260,000 people died from starvation in Somalia alone.

The situation is much more precarious right now, as the region has suffered two consecutive years of extreme climate events in terms of devastating floods and rising lakes – Lake Victoria reached its highest level on record. Added to that, says Asokan, a locust upsurge has severely affected crop production in the region.

“It is important to save and store as much as possible from previous harvests so that it can be used next year when food is scarce. This will help avoid price shocks. A lot of food security is about logistics —harvesting in one place and bringing it to another, and ensuring storage without spoiling the produce. Bear in mind, in times of Covid-19, transportation has become even more difficult”, Asokan notes. 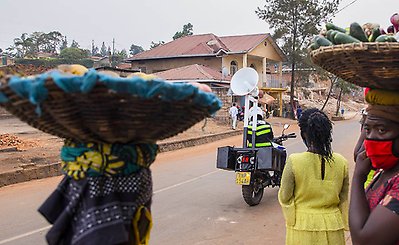 A policeman transmits information about Covid-19 preventive measures on a street in Kigali. Photo: Cyril Ndegeya/Xinhua

5. Will build-back plans include women?

When African countries launch recovery plans to build back after the Covid-19 crisis, will they also take gender perspectives and women’s economic rights into account? This is important to address the rise in domestic violence due to increasing unemployment and mental stress, according to NAI Senior Gender Researcher Diana Højlund Madsen.

When African states enforced lockdowns to stop the spread of Covid-19, families were confined to their homes – and millions of women with abusive husbands found themselves trapped. They were no longer able to reach out to relatives and friends. As a result of the lockdowns, the safe spaces where abused women had formerly reached out for counselling were closed. Even as lockdowns have been lifted, the situation remains precarious for many African women, Højlund Madsen says.

“We will still see the effects of Covid-19 for some time. High unemployment and mental stress are factors that can trigger physical and mental abuse”.

In Rwanda, where one in three women and girls has experienced violence according to UN Women, men’s unemployment has risen by 6 percent since the start of the pandemic, reaching above 20 percent (National Institute of Statistics of Rwanda). While there are no official statistics showing how Covid-19 has affected domestic violence, Rwandan NGOs and the country’s Gender Monitoring Office say information from hotline numbers and police reports suggests a rise in the number of abuse cases.

The economic downturn has not only led to growing frustration among men, but also deprived many women of their own income. Informal sectors such as cross-border trade, which are dominated by women, were dealt a severe blow by Covid-19.

“The Rwandan government’s ambitious recovery plan for 2020–2021, launched in April 2020, lacks a gender perspective. It fails to offer economic support to people in the informal sector and does not provide support tailored to women and girls. The situation is similar across the continent” Højlund Madsen says.

In Rwanda and elsewhere, women’s organisations are urging governments to demonstrate feminist leadership and include national gender institutions to revise their recovery plans in 2021. 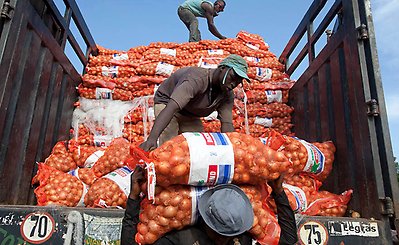 How will the continent’s low-income countries cope with the terms of the African Continental Free Trade Area (AfCFTA)? There is a risk that big companies from already export-oriented African countries will outcompete firms in less-developed countries, NAI researcher Jörgen Levin says.

“Companies will need to become more efficient. Some will survive and some will not. But foremost, it is about organising production in a better way and using resources efficiently”, Levin remarks.

Costly transportation and expensive energy are general problems for trade and production in Africa. These factors are among the reasons for it being so difficult for African products to compete on the world market.

“It is expensive to produce in Africa. However, through increased trade to other African countries and exploiting economies of scale, firms can reduce costs and increase their competitiveness in global markets”, Levin points out. 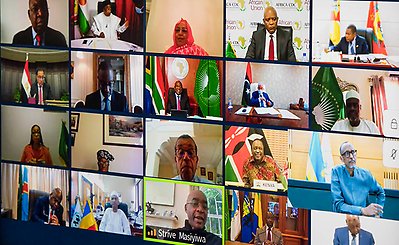 7. The next step in Africa-Europe relations?

How will Africa’s increasingly assertive view of itself affect its partnership with Europe? The sixth African Union (AU)-European Union (EU) Summit is planned for 2021, after being postponed due to the Covid-19 pandemic. However, there is growing concern within the EU about the level of commitment among African countries, NAI Director Therése Sjömander Magnusson says.

“What Africa wants is true agency. A partnership of equals. The successful achievement by African governments to establish a continental free trade agreement might be a shift in power balances between the AU and EU. It could benefit the establishment of a partnership that does not follow the same path as before. It will be interesting to follow what leadership role the AU will take to move the partnership forward”, Sjömander Magnusson adds.

Also, in the next year EU members will decide on a new pact on asylum and migration. One key problem, according to NAI researcher Jesper Bjarnesen, is that anti-immigrant sentiments in Europe have focused the debate on a small minority of migrants – the irregular ones.

“Between the lines of the new framework, the EU continues to use development aid as a bargaining chip to persuade African states to receive migrants who must return involuntarily from Europe. African leaders have expressed criticism towards such an approach, and are likely to engage even more with other global players such as China and India, which is bad business for Europe in the long run. The EU has allowed itself to become distracted by a rather small issue, and the AU might make them pay the price for it”, Bjarnesen adds.