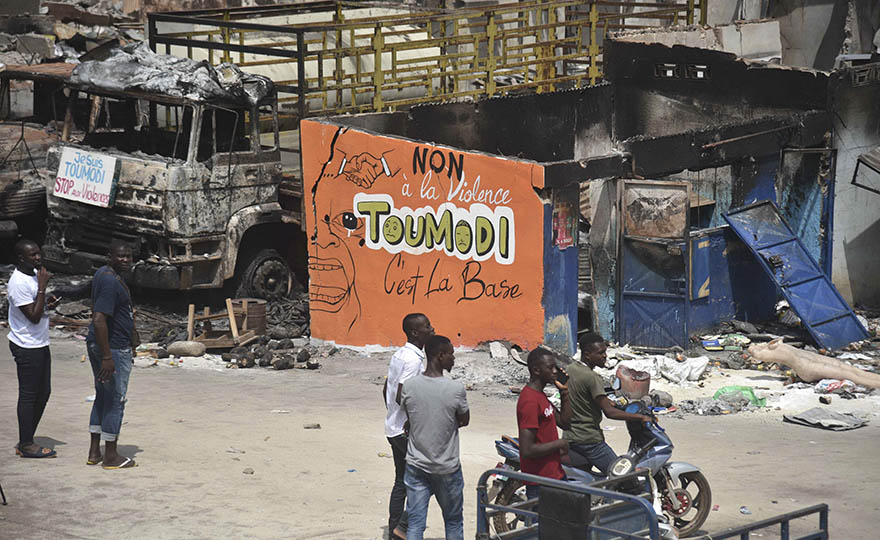 People stand near a wall of a damaged shop that reads: "no to violence, Toumodi is the basis" in the market of Toumodi on November 4, 2020, during a campaign of non-violence and peace awareness by young volunteers after inter-community clashes during the country's presidential election of October 31, 2020 Photo: SIA KAMBOU / AFP

Côte d’Ivoire is a divided country after Saturday’s election, according to NAI researcher Jesper Bjarnesen. “While President Alassane Ouattara is ready to begin his controversial third term in office, the opposition insists that the election process was fundamentally flawed and illegitimate,” Bjarnesen says.

President Ouattara overwhelmingly won the election after securing 94.27 percent of the vote, the country’s electoral commission announced on Tuesday. However, the victory for the incumbent president came after two leading opposition figures had called on their supporters to boycott the election, claiming that a two-term limit in the country’s constitution prevented Ouattara from running for another term.

The opposition now demands that the voting result is nullified and that a transitional government is formed which can lead the country towards new elections.

“The situation is very tense with highly polarised views of what has happened and what should happen next,” says Bjarnesen. 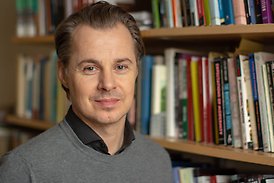 Under normal circumstances, an election result is verified by the Constitutional Council as a last step in the formal electoral process. However, given the conflicting views about the validity of the entire electoral process, not the results as such, the country is facing a much longer and more difficult legal struggle between the two sides in the current divide.

“All these processes will take a significant amount of time and the risk is that these disagreements will create further violence and instability in parts of the country,” Bjarnesen says. Clashes surrounding the vote claimed five lives on election-day and at least 30 deaths were reported in the lead up to the election.

ECOWAS and African Union (AU) delegations, which observed the elections, said that there were significant incidents on election-day. NGO Indigo Côte d’Ivoire, which had more than a thousand observers on the ground, said that about 23 percent of voting places were unable to function because of harassments. Despite the worrying observations, however, the AU declared the election process “acceptable”.

The opposition’s decision to boycott the election has left them with the only option of challenging the over-all election process.

“This appears to be an increasingly difficult strategy after international observers recognized the vote as being fairly transparent”, Bjarnesen says.

Opens in new window., Bjarnesen and co-researcher Sebastian van Baalen outlined four possible scenarios, with different levels of risk of violence, following the presidential election. The worst scenario entailed a return to armed conflict, as happened after the 2010 elections. The current situation resembles the least violent scenario, where the incumbent president wins “such a clear victory that the opposition has little scope to challenge the results”, according to Bjarnesen. 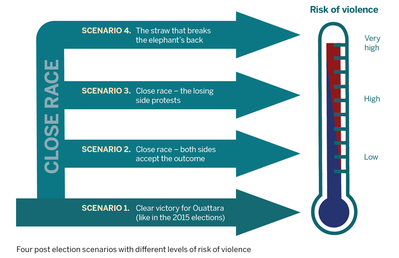 “However, the current situation differs from the scenario we outlined in the sense that we did not expect that the opposition would essentially hand the victory to the incumbent president by boycotting the election. Nevertheless, the risk of dangerous mass mobilization on both sides is smaller than in the case of a closer result,” he adds.

At the same time, if the opposition faces a blank refusal on the part of a government that says “we will not negotiate or even listen to your reasoning around the credibility of the election”, then the opposition might turn to their supporters and try to mobilize them on the streets, according to Bjarnesen.

“We have seen signs in the last few days that opposition leaders are encouraging supporters to take to the streets to protest against Ouattara’s third term, including calls from exiled former rebel leader Guillaume Soro. In other words, there is still a lot of uncertainty regarding the legal aftermath of the election and around how the two political sides will react.”