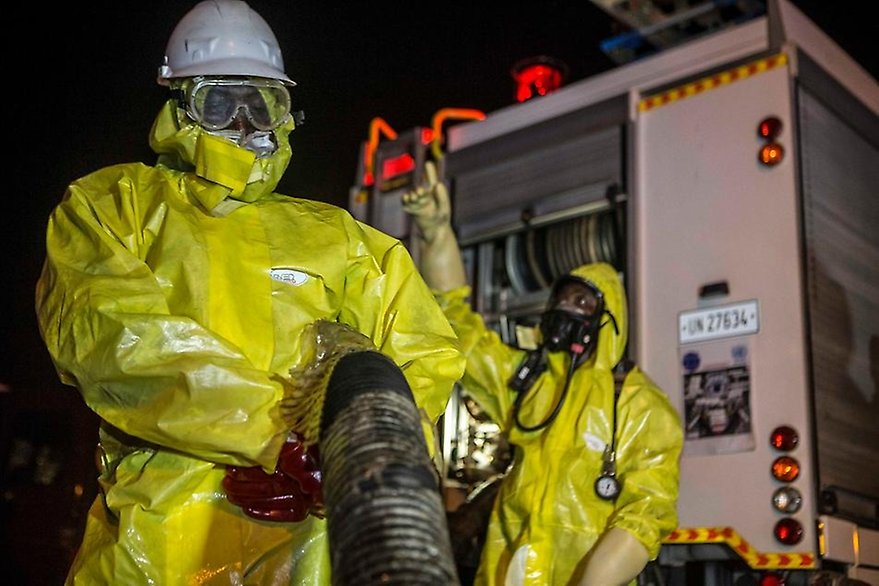 The Coronavirus crisis hit Africa at a time when many of the continent’s economies were already at risk of debt distress. Multiple shocks caused by the pandemic have increased their need for new loans. The increasing complexity of the loan market makes it hard to achieve debt relief settlements. The way forward is instead diversification of the export industry, reform of the tax systems, investment in human development and closing the digital divide.

Falling commodity prices, a stand-still in tourism and dropping domestic demand will create shocks for many African economies in the wake of the Coronavirus crisis. Most vulnerable are those countries dependent either on exports of minerals, oil and other natural resources or on tourism; meanwhile, countries with a low debt ratio and accumulated assets, such as Botswana, stand a good chance of avoiding a depression. The key is to combine tax policy measures with increased public spending to create stimulus packages and social protection.

Between 26 March and 11 June, the International Monetary Fund (IMF) approved USD 25 billion US dollars in emergency financing and debt relief to 73 countries across the world to help address the economic effects of Coronavirus in the world. Almost 14 billion, or 56 per cent, of this sum was aimed at African countries.

The 25 billion dollar emergency financing approved so far in IMF's response to Covid-19 is only a quarter of the expected demand of about 100 billion dollar. 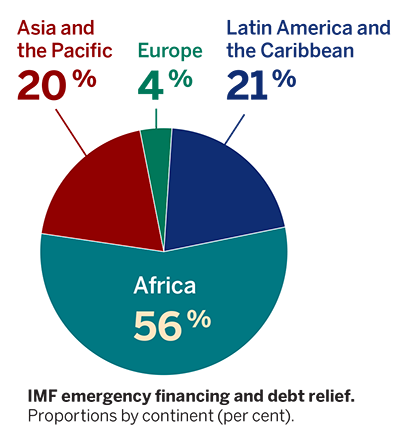 There is serious concern about the economic impact of the Coronavirus across African countries. Health interventions and short-term emergency responses are clearly very important; but in this note we focus on economic concerns that have both immediate welfare consequences and also the potential to translate into a medium-to-long-term crisis. The economic impact of the pandemic can be divided into three major shocks:

The combination of all three shocks and a protracted crisis will have repercussions that could be very costly in economic terms. One immediate consequence is that tax revenues are falling sharply, while public spending is increasing.

Countries need to borrow to finance their growing budget deficit. The impact will be very different across Africa’s countries. Countries that are dependent on their natural resources (such as South Africa, Angola and Nigeria) will be hit hard by falling commodity prices, but other less resource-dependent economies will also be affected.

A number of African countries have been hit hard by the complete stand-still in the tourism industry. Lost export earnings in some countries are huge. Some of the island states in the Indian Ocean and the Atlantic are especially badly affected: for example, tourism accounts for approximately 60 per cent of Cape Verde’s total export earnings. Other tourism-dependent countries will also be affected: for example, Gambia, Tanzania, Rwanda and Ethiopia. On top of that, weak external demand and disruption to supply chains and domestic production due to lockdown will also have a negative impact on growth in many countries. It is likely that per capita growth will turn negative, and that levels of poverty will increase in all African countries. Some observers, like Andy Sumner, professor of international development at King’s College London, note that there is a significant risk that the adverse impact could result in poverty levels similar to those seen in the early 1990s.

The Coronavirus crisis has clearly shown how vulnerable most African economies are to multiple shocks. One immediate effect after the outbreak in China was that commodity market prices started to fall. Between December 2019 and March 2020, the price of crude oil and industrial metals fell by 50 per cent and 11 per cent, respectively. A number of resource-dependent countries were already in a difficult position, after the end of the so-called commodities super cycle (2000–14). Before the Coronavirus crisis erupted, seven African countries were in debt distress, according to the IMF: Eritrea, Gambia, Mozambique, Republic of Congo, São Tomé and Príncipe, South Sudan and Zimbabwe. A further nine were at high risk of debt distress: Burundi, Cape Verde, Cameroon, Central African Republic, Chad, Ethiopia, Ghana, Sierra Leone and Zambia.

In the current situation, African economies face significant challenges – particularly resource-dependent economies that derive a large proportion of government revenue from the extractive sector (resource rents). In some countries, fiscal dependency on natural resources is extremely high. For example, in Equatorial Guinea and South Sudan, the share of resource rents in government revenue is close to 80 per cent. Other countries – such as Nigeria, Angola, Chad, Gabon and Botswana – have a resource rent share of total revenue in the range of 30–60 per cent. The urgent need to increase public spending in the midst of falling tax revenue can only be addressed by borrowing or using funds and assets previously accumulated when commodity prices were booming. However, few resource-dependent countries in Africa (with the exception of Botswana) have accumulated assets, and their only short-term option is to borrow from the IMF. 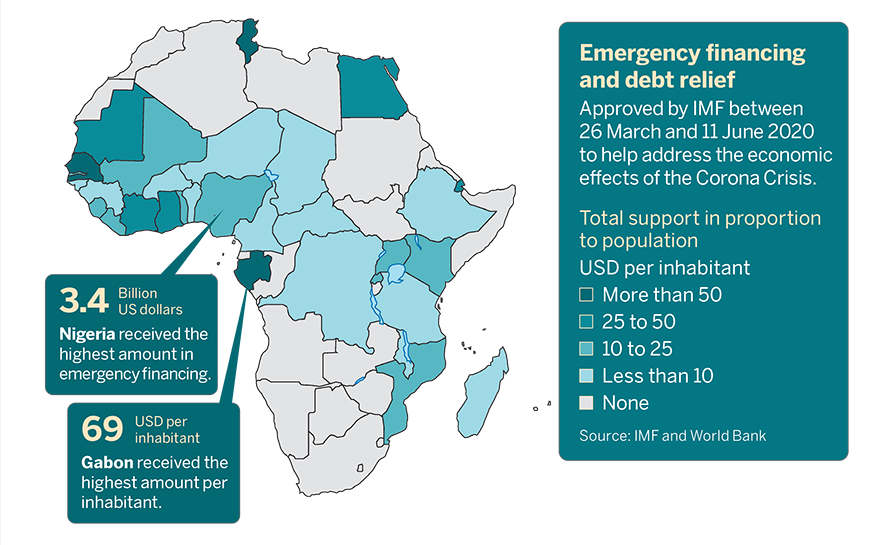 When a sector is badly hit by a global shock, other sectors of the economy are also affected. To showcase this, we look at Kenya, a country where the Coronavirus pandemic has affected two of its main earning industries: tourism and horticulture (flower exports).

By simulating four shock scenarios, we can illustrate the short-term impact across the economy – not only in those sectors directly hit, but also in sectors that are indirectly affected. Output contraction in one sector reduces demand for inputs from other sectors of the economy. Tourism activities are included in several sectors of the economy, such as restaurants and hotels, and the food, transport and wholesale/trade sectors.

While the figures for the shocks to hospitality and flower production are based on media reports, those for the other shocks are based on OECD estimates of the economic cost of shutdown for other countries. The cost ranges from over 15 per cent of GDP in South Africa during 2020, to over 25 per cent in the USA and around 30 per cent in Mexico. The calculations are based on the assumption that the shocks will last for the whole year. Our first scenario suggests that a dramatic shock in the hotel industry will have only a minor impact on the Kenyan economy. This is because the sector itself contributes only around 1.5 per cent to Kenya’s total GDP. But tourism encompasses other sectors as well, and if we add demand shocks in other sectors, such as transport and wholesale, the impact is significantly larger.

The combined shocks in scenarios 2 and 3 should be seen as a combination of reduced tourism and falling domestic demand due to lockdown. Transport and wholesale are major sectors, and therefore have a large effect on both GDP and poverty. In scenario 4, we add a trade shock, in which the income of the cut-flower sector falls by 80 per cent. In a scenario that includes all four shocks, GDP is reduced by close to 6 per cent, which translates into 1 million more individuals living in poverty.

What can countries do to avoid the stand-still in the domestic part of the economy? In rich countries, governments are supporting industries hit by the crisis in several ways: postponing tax payments, scaling up unemployment compensation, and offering interest-free loans to bridge the gap between fixed costs today and future revenue. Many of these measures are not feasible in African countries: first, because of lower tax revenues (which limits the scope for manoeuvre); and second, because it is very difficult to target specific sectors, since most people are employed in small-scale enterprises.

A number of African countries are currently implementing stimulus packages that combine tax policy measures with increased funding for social protection. For example, Kenya has reduced VAT rates and cut the rates of income, corporate and turnover tax. Other governments are distributing food (Uganda) and have announced schemes to provide free electricity and water, and tax holidays. Botswana has established a Covid-19 Relief Fund that will finance wage subsidies and tax reliefs.

The fiscal stimulus packages mainly benefit formal businesses, and it is likely that many – particularly small-scale – operators will be left without any support. Even if it is important to contain the spread of the coronavirus, there are huge costs involved in lockdown, particularly for informal businesses and self-employed workers. They lack the assets to smooth the effects of income shocks. As it is difficult to reach informal firms, the best approach is to target workers via the channel of cash transfers to households. Scaling up cash-transfer programmes to poorer households makes a lot of sense in these times, and there is the added advantage that the programmes support local businesses. Rapidly falling tax revenues, however, make it difficult to support such programmes. Many of them have previously been piloted and supported by donor funding, and now is the right moment for donors to return and help them scale up.

In these turbulent times, it is particularly important to monitor the food sector, and especially the way in which food prices evolve. In years of good harvests, some African countries are almost self-sufficient in food production, but trade between and within countries is important. The imposition of border controls within a country – and particularly between regions with a food surplus and others with a food deficit – has an immediate effect on food prices. As the agriculture sector depends on seasonal workers and on the trade in intermediate inputs – both between and within countries – continued strict lockdowns could add food price shocks to an already difficult situation.

Debt cancellation and the SDG agenda

The current crisis is likely to affect the achievement of the Sustainable Development Goals (SDGs). Even before the Coronavirus crisis, there were concerns about rising debt levels and the unsuccessful mobilisation of public and private resources in some African countries. There are now calls for a new debt-cancellation initiative.

Immediate debt cancellation is not an option. Previous debt-cancellation initiatives took years to negotiate; and now that we have a more complex constellation of creditor groups, such moves are likely to prove even more complicated. Under the old system, most of the debt in sub-Saharan Africa was owed to the World Bank, the IMF and the Paris Club, an informal group of Western government creditors. Today, a significantly larger share of the debt is short term, commercial and owed to China. A successful debt-restructuring initiative would need the participation of all creditors.

The economic repercussions of the Coronavirus pandemic have been far-reaching – both at the individual level and for society generally. Can we draw any lessons while we are still in the midst of the crisis? It is obviously very difficult to know whether economic policies adopted today are effective, as policy makers are operating in the dark. However, looking beyond the immediate policy response, the crisis has also revealed underlying structural problems in several African countries. Many of these problems should be addressed, regardless of the outcome of the pandemic.