“African federations have failed to live up to people’s expectations” 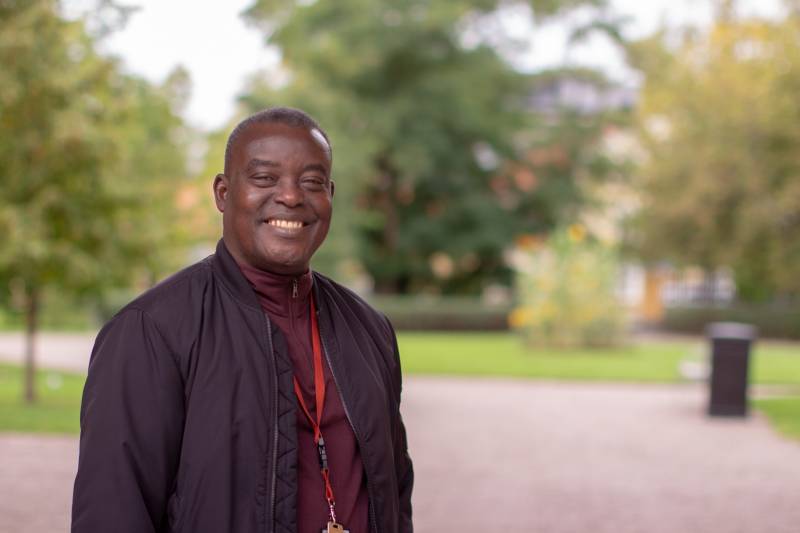 The question of who of owns the state has been occupying the mind of Nigerian political scientist Eghosa Osaghae for three decades, and continues to do so. As this year’s Claude Ake Visiting Chair he will devote his time to exploring new theoretical perspectives on federalism as a model for managing ethnic and other tensions.

Osaghae says that he hardly recognises the city of Uppsala, where he was a guest researcher for a few months in 1994.

“Uppsala has grown, the atmosphere is different and there are so many new buildings”, he says as he sits down in a small meeting room that has a view of the city’s botanical garden.

In the 25 years that have passed, Osaghae has published extensively on issues of ethnicity, federalism, governance and state politics. He has received numerous academic awards and become one of Africa’s leading scholars within his field.

Osaghae studies federalism as a model for managing tensions related to ethnic, racial, social, cultural and other forms of diversity. He focuses on the challenges of decolonised states, where “different groups were not part of the original contract to exist under the same roof”.

Osaghae says that in Africa federalism has worked with great difficulty, at best.

“Even federal situations that appear to be working – in Nigeria, Ethiopia, Comoros, South Africa, Tanzania, Sudan – have not met the expectations that people have.”

He says that compared to the US and Germany, for example, where individual states that make up the federation have considerable powers and autonomy, African federations are heavily centralised.

“In African federalism, too much emphasis has been on the central government and too little on subnational units. So what you end up doing in the name of decentralisation, paradoxically, is increasing the power of central government.”

Osaghae thinks that there is a strong need to reinvent federalism, which brings him to the purpose of his three-month stay in Uppsala: to explore new theoretical perspectives on the subject.

As a young scholar, his understanding of key political science components such as ‘state’ and ‘sovereignty’ where highly influenced by fellow Nigerian scholar Prof. Claude Ake, whose memory was honoured with the Claude Ake Visiting Chair in Uppsala after his tragic death in a plane crash in 1996.

Ake analysed the African state in a historical manner, often returning to questions of decolonisation and autonomy.

“He didn’t think that independence had changed the basic character of the state. The state was still an agent of global capitalism and that in itself meant that it was a site of struggle between forces of colonisation and decolonisation.”

According to Osaghae, much of Ake’s analysis relates to the question of who owns the state, which has also been a key element in Osaghae’s own work for three decades.

The two Nigerian scholars eventually met at a conference in Ibadan in 1992, where Ake found Osaghae’s paper about the management of ethnic conflicts in Africa so interesting that he asked the young academic to expand his work for publication as a monograph.

After the conference they stayed in touch. Ake would occasionally call Osaghae to discuss research matters or simply ask how he was doing. Then the news came on 7 November 1996 that Ake had died. Ake was one of 142 people killed when Flight 86 between Port Harcourt and Lagos in Nigeria crashed.

A year before his death, Ake had resigned from the steering committee of the Niger Delta Environmental Survey in protest over the execution of minority rights activist Ken Saro-Wiwa.

Osaghae says that Ake was an advocate of global justice, who combined the roles of researcher and activist extremely effectively.

“There was a theoretical framework within which he defined and shaped his activism. It was evidence-based activism.”

In the years before his death, Ake’s radical scholarship had provided an African response to US political scientist Francis Fukuyama’s argument that free market capitalism and Western way of life had provided the final form of government.

“He reminded us that you could not have a one-size-fits-all world order, that you needed to recognise the massive inequalities and exploitation of the global South that had been going on since colonial times.”

Ake spread his research findings on many levels and far beyond academic circles; for example, through the World Bank, which in 1989 published his long-term perspective study Sub-Saharan Africa – From Crisis to Sustainable Growth.

“Without any doubt, the African voice in the world would have been much stronger if Claude Ake was still here.”

Professor of comparative politics at University of Ibadan, Ibadan, Nigeria, and the 2019 Claude Ake Visiting Chair. One of Africa’s leading political scientists and scholars on ethnicity and federal studies. Amongst his books are Crippled Giant: Nigeria Since Independence (1998), The Nigerian Civil War and its Aftermath (2002) and Researching Conflict in Africa: Insights and Experiences (2005), a co-edited book published by the United Nations University Press. He has published well over 100 articles in books and learned international journals.

Professor of political economy, appointed at the University of Port Harcourt in 1977. Part of a pioneer generation of Nigerian and African intellectuals in the 1970’s immediate post-independence environment. An engaged humanist who combined scholarship with a commitment to help the poor and oppressed.

The purpose of this scholarship programme is to honor the memory of Professor Claude Ake, prominent African scholar, philosopher and humanist, and to invite applications from internationally recognized senior scholars with professorial competence in their respective fields of expertise.