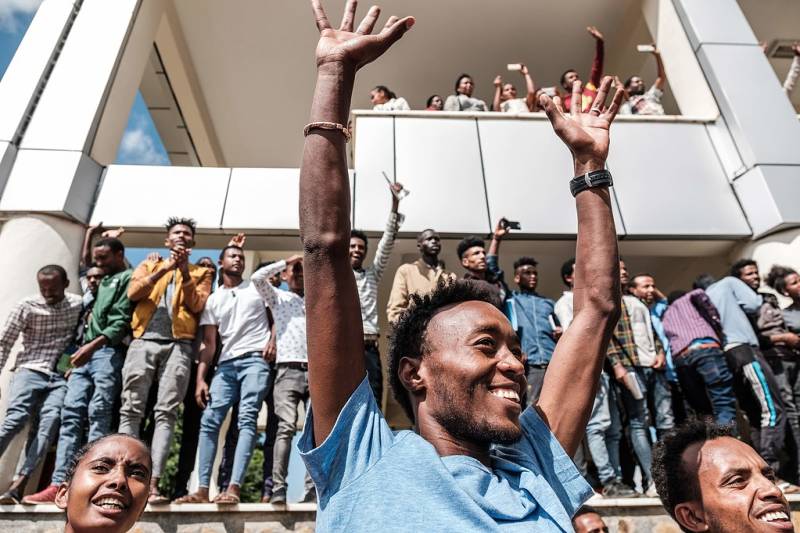 Gondar, Ethiopia, November, 2018. University students gathered for the visit of prime minister Abiy Ahmed’s during his summit meeting with the presidents of Eritrea and Somalia. Photo: Eduardo Soteras, AFP.

Political power has shifted in Ethiopia – from north to south, and from one ethnic group to another. That is one reason why a peace agreement with Eritrea has become a reality, according to NAI Horn of Africa expert Redie Bereketeab.

When Abiy Ahmed was elected prime minister in 2018, it meant that for the first time Ethiopia’s leader came from the country’s largest ethnic group, the Oromo.

“Previously, Ethiopian leaders had always been either Amhara or Tigrayan, who both can be said to have been the old ruling classes of the kingdom of Abyssinia. These ethnic groups had claims on Eritrea and never recognised that country’s legitimate right to independence. The Oromo people from the south, however, never had any claim on Eritrea and have been underdogs themselves. Therefore, it was easier for Eritrea's leadership to trust Abiy Ahmed”, Bereketeab remarks.

Although it renewed trust from the perspective of Eritrea, it was in fact domestic turbulence in Ethiopia that led the way to the peace agreement, according to Bereketeab. Oromo youths in 2015 began to protest against the federal government. Initially, the government’s response was heavy-handed and violent, but later it tried to appease the protesters by implementing some of the reforms they were demanding – but without success. Instead, protests grew to also include Amhara youths.

This meant the two biggest ethnic groups were involved in a public uprising against the central government. The protests caused extensive damage to the economy, the security situation deteriorated dramatically and inter-ethnic conflict rose to an all-time high.

“Most importantly, serious division occurred within the ruling party, the Ethiopian People’s Revolutionary Democratic Front. At the end of 2017, the situation was alarming and Ethiopia was on the verge of a collapse. The only alternative was substantial reform and a change of the old guard. That was how Abiy Ahmed got into power and peace with Eritrea followed as a side effect”, Bereketeab notes.

There are still issues in the agreement between Ethiopia and Eritrea that need to be dealt with. Out of five points the leaders agreed on, all but one is still awaiting implementation. Chief among the outstanding issues is the border. The Tigray regional government, led by the Tigray People’s Liberation Front (TPLF), is insisting that demarcation between Ethiopia and Eritrea, as set down in the peace agreement, should be resolved through consultation with the local population in the border region. The Ethiopian prime minister, however, has stated unequivocally that nation states decide on borders, not local communities.

Another sticking point in the agreement concerns economic integration between the countries. In Eritrea, many people are concerned that the much larger Ethiopian economy will overwhelm domestic production. Moreover, Bereketeab says, the interpretation of the very meaning of the peace agreement differs depending on who you are talking to. Some Ethiopians see it as a reunion between the countries, whereas Eritreans view the agreement as Ethiopia's last chance to recognise Eritrea unconditionally.

Additionally, Prime Minister Abiy Ahmed faces domestic criticism. The TPLF accuses him of violating the constitution by releasing terrorists and criminals from prison, and allowing armed and political groups that were branded as enemies of the state to return to the country under a general amnesty. The party also accuses him of targeting Tigrayans in his campaign against corruption and human rights violations.

For many Ethiopians, though, the most serious problem the country faces is the organisation of the federal state along ethnic lines, which they perceive as a threat to the unity, stability and territorial integrity of the country. Proponents of this view would like to dismantle ethnic federalism.

“Ethnic federalism was created after the regime changed in 1991. Many smaller minority groups were then officially recognised and entitled to their own culture and language. Therefore, they want to maintain the ethnic federal state arrangement that provides them specific rights and self-rule”, Bereketeab concludes.