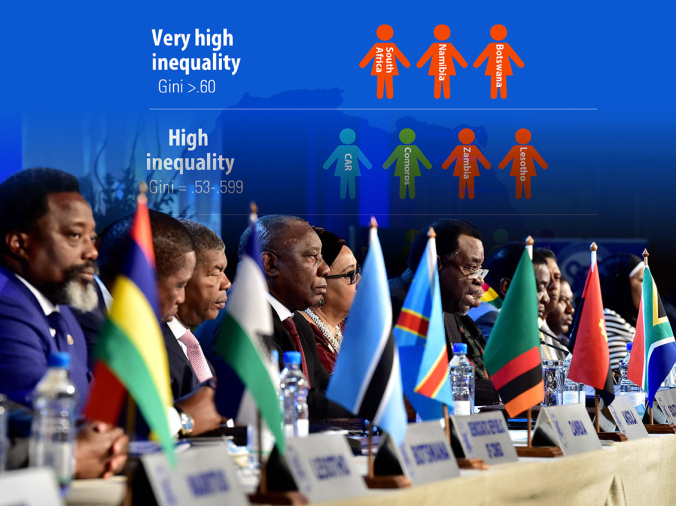 The leaders of the Southern African countries meeting at the 38th SADC Summit in Namibia, 18 August 2018. Photo: GCIS, Creative Commons.

Following the end of the cold war, the independence of Namibia in 1990 and the fall of the apartheid regime in South Africa in 1994, the southern African region entered an era of relative political stability and competitive multi-party politics.

But the peace dividend proved unable to finance the hopes and expectations of the region’s masses. Why? Political analysts point to the ‘mixed bag’ of democratisation processes as the reason for this. Of concern has been the marked shift in the last few years towards populist authoritarianism in some of the countries in the Southern African Development Community (SADC). 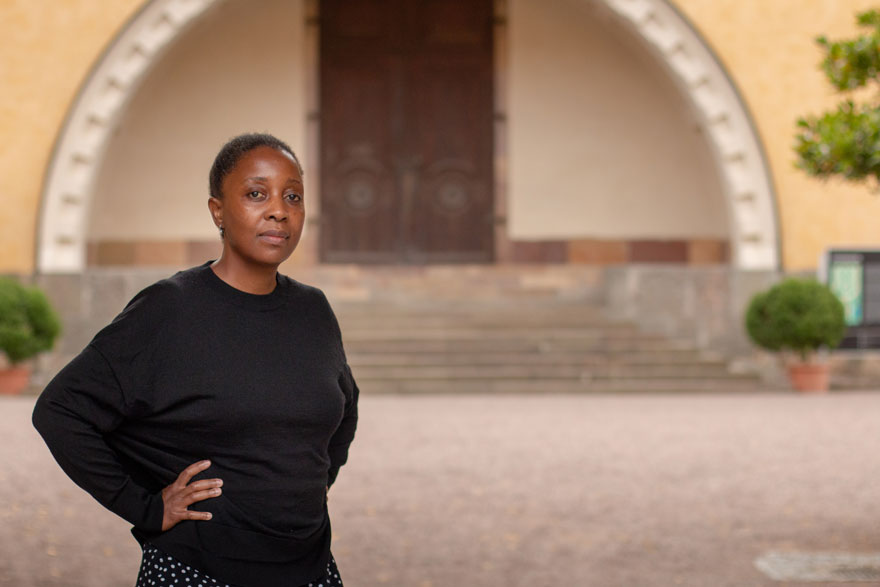 Since the early 2000s, the region has seen a surge in foreign direct investment in its extractive economies – driven by growth in China and India – and in the shift to electric vehicles, renewable energy sources and digital economy with the attendant growth in big data is fuelling demand for battery minerals which are of increasing strategic importance for the key global economic players in North America, Europe and Asia.

These trends have received significant coverage in the media, with democratisation pundits emphasising good governance and participation in election cycles; and economic analysts looking at growth and investment forecasts in commodities such as cobalt, copper, platinum, uranium and rare earth minerals.

The attendant destruction of the state’s vital functions in the wake of the harsh neoliberal austerity policies of the 1980s and 1990s, and the stark socio-economic inequality characteristic of inadequate redistributive mechanisms, have received less attention. 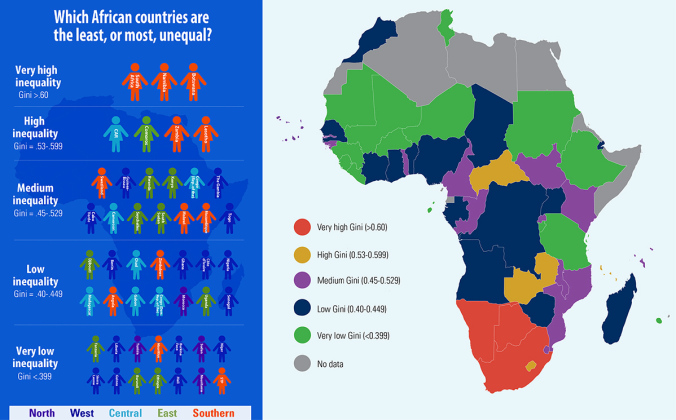 Infographics from the 2017 UNPD report showing that five of the ten most unequal countries in the world are in Southern Africa. Source: World Bank, Gini Data from December 2016.

External link, opens in new window. from ILO highlighted a severe crisis across the region, with poor living conditions, high unemployment and inequality. In some countries, such as Zambia, gains that were made in the immediate post-independence period of the 1960s had actually been reversed.

The paper recommended a ‘developmental state’ approach that reflected broader socio-economic concerns, and depended less on the interests of ruling parties’ inner circles and donor prescriptions. A 2017 UNDP report

External link, opens in new window. showed little progress in alleviating growing inequality: South Africa, Zambia, Namibia, Lesotho and Botswana (in this order reflecting their regional ranking) remained among the 10 most unequal countries in the world.

Some of the key factors driving growing inequality in the region also influence the kind of politics found there: all of the countries in the region operate a dualistic economic structure, with a small number of citizens employed in the formal sector, and the remainder engaged in precarious and underpaid work in the informal sector or the subsistence economy.

The failure of redistributive mechanisms in those countries – a result of prolonged austerity policies and rentier economies – means that services and infrastructure (health, education, transport, water, energy) are concentrated in areas with small, better-off populations.

Political parties whose politicians often have business interests tend towards populism rather than taking concrete measures for redistribution. Their business connections make them reluctant to take on the corporations and business elites that dominate the regional economies.

Between 2011 and 2015, Mozambique and Zambia where among the 10 fastest-growing economies

External link, opens in new window. globally. Both countries issued Eurobonds on the back of this optimism. However, since Mozambique’s default

External link, opens in new window. have grown over whether Zambia will meet its repayments

External link, opens in new window., which are due in 2022. Fears are mounting that debt distress will catalyse a fire sale of key state assets such as utilities, and extortionate demands by creditors on mineral resources

On top of this, serious allegations of non-transparent and fraudulent acquisition and spending of grants and loans have dogged Zambia and Mozambique

External link, opens in new window., leading donors to threaten to withdraw support for poverty-alleviation programmes. This is not unprecedented.

External link, opens in new window.. It is symptomatic of the privatisation and outsourcing

External link, opens in new window. of public services and assets, and of politicians acting as brokers in these processes (Zambia is a case in point).

While anti-corruption rhetoric has grown fuelled by public anger and civil society mobilisation, a question that has received less attention is how countries can ever be expected to meet their debt obligations without also reversing ongoing privatisations, and stopping corporate tax evasion and regulating financial flows.

Land as a welfare mechanism

Land is an important resource and welfare mechanism for the rural and urban poor of the region who either rely on subsistence agriculture for a living, or supplement their livelihoods by growing some of their own food. Roughly 80 percent of the sub Saharan Africa region’s population is employed in small-scale farming

External link, opens in new window.. However, in countries such as Mauritius

External link, opens in new window., South Africa and until recently Zimbabwe, the most fertile land is concentrated in just a few hands. In the former white-settler colonies of Namibia, South Africa and Zimbabwe, land ownership reflects a history of racially based capital accumulation. In South Africa for example, roughly 67% of the land is ‘white’ commercial agricultural land.

However, the prevailing Euro-American attitude that land redistribution equates to racial war deflects attention from inequality. In the wake of the chaos of the land redistribution policy in Robert Mugabe’s Zimbabwe – which in effect rendered the country a pariah state until Mugabe was eased out of power

External link, opens in new window. – the ruling parties of Namibia and South Africa are taking a cautious approach.

In those countries, the land reform debate has been driven by restive young people who make up the majority of the populations: in Namibia, the Affirmative Repositioning movement has taken on the ruling SWAPO party over its failure to make affordable land available to poor urban youth, organising mass applications for rent-controlled land from municipalities that have dragged their feet over land distribution.

Meanwhile, in South Africa the Economic Freedom Fighters (EFF) – an offshoot of the ruling African National Congress’s youth league – are not only calling for equitable land reform, but also for the nationalisation of key industries to fund wider redistribution. In February 2018, the EFF successfully tabled a parliamentary motion for land redistribution without compensation.

Cyril Ramaphosa, South Africa’s new president, is to oversee the land reform process. Since he is regarded as inclined to favour corporate interests, scepticism remains about his effectiveness.

In DRC, Mozambique, Tanzania and Zambia, the growth of extractive industries on the back of a commodity boom has led to calls for the redistribution of income from mineral wealth, much of which finds its way abroad because of lax tax regimes. The undue influence of the extractive industries’ lobby means that any discussion of redistributive mining taxes defers to corporate mining interests.

An active lobbyist is the Brenthurst Foundation, established by the South African Oppenheimer family

External link, opens in new window. – which has the ear of the region’s right-leaning opposition parties. In DRC, Tanzania

External link, opens in new window. and royalties has been met with howls of protest from corporations, some of which are actually threatening

External link, opens in new window. to challenge this in international arbitration (which some critics

In countries dominated by extractive industries, all discussion of tax regimes, ownership and, indeed, whether the potential profits from extraction are worth the costs

External link, opens in new window. involved has tended to focus on the interests of a narrow political constituency. The views of large swathes of the region’s population – those involved in informal and subsistence work – are ignored.

While the corporate mining industry, which often manages to avoid public scrutiny, has negotiated subsidies

External link, opens in new window. for itself, people face increasing costs for land, water and energy. Leading opposition parties, such as Zambia’s United Party for National Development (UPND) and Tanzania’s CHADEMA, contribute to stifling the debate. They incline politically to the conservative right and do little to explain how they would tackle inequality.

Similarly, the ruling parties in those countries – Chama Cha Mapinduzi (CCM) in Tanzania, led by President John Magufuli, and the Patriotic Front in Zambia, led by President Edgar Lungu (both in office since 2015) – have resorted to ad hoc rather than holistic systemic approaches to deal with discontent over poverty and inequality.

As parties, the UPND and CHADEMA have little in the way of internal democratic structures. The upshot is a form of politics that is neither participatory nor representative of wider concerns, but which has become a factional struggle among each country’s political elite.

In Zambia and Tanzania, the ruling parties have resorted to politically repressive measures: in Zambia, daily newspaper The Post was closed down; and in Tanzania, the weekly Mawio was suspended after an investigation

There are worrying signs in north-western Mozambique and DRC’s Katanga region that a resurgence of mining and exploration may be dragging those regions into civil strife. In Mozambique, the acquisition of land for coal and gas exploration has led to resistance from communities who object to forcible relocation to pave the way for mining. The response has been violent repression by the police.

External link, opens in new window., including the burning of houses and beheading of a local Islamic leader. The appearance in Mozambique of Erik Prince, founder and former CEO of the private security contractor Blackwater (which was implicated in war crimes in Iraq), and his offer to provide maritime security

External link, opens in new window. to the country, and possibly to other areas such as mining raise serious concerns

In DRC, political tension is rising after the breakdown of the political alliance between President Joseph Kabila and Moïse Katumbi Chapwe, the exiled former governor of mineral-rich Katanga, who now plans to contest the presidency. Kabila, who recently agreed to hold elections after refusing to step down, is embattled on several fronts.

Poverty and insecurity are growing in various parts of the country. Meanwhile multinational mining companies are resisting a proposed increase

External link, opens in new window. in mining royalties, which would boost revenue from strategic mineral resources such as cobalt

External link, opens in new window., (important for its use in rechargeable batteries): the country has roughly 48 percent of the world’s cobalt reserves.

Some of the tensions reflect a geopolitical struggle for resources. Over the past decade, China, a relative newcomer to the region, has been trying to get a foothold in the extractive sector, which is dominated by Euro-American and Australian mining interests.

A political focus on large-scale commercial agriculture, agribusiness and the extractive sector is undermining discussions on how to achieve equitable redistribution in this, the world’s most unequal region. It is particularly concerning that the largest opposition parties in South Africa (Democratic Alliance), Tanzania (CHADEMA) and Zambia (UPND) offer little in the way of alternatives, and are actually veering even further to the right of the ruling parties.

The present focus on electoral politics and procedures is not enough to build on the democratisation process that started in the 1990s. What is needed is a shift towards participatory economic models and a willingness to introduce wide-ranging redistributive mechanisms.

These changes would involve a developmental state; progressive taxation; a clamp down on corporate-sector tax evasion; collective and state ownership of strategic resources; and equitable distribution of land and access to services.

The region’s young people are pressing for a redistributive political agenda. They are the biggest losers in the current economic system and have much to gain by keeping the growing inequalities at the top of the agenda.

A shorter version of this article has appeared in German in WeltTrends Südliches Afrika: Stagnation statt Aufbruch? No. 144, October 2018

Note that some links not working has been removed since the article was first published.