From Independence to Banditry: The Casamance Conflict 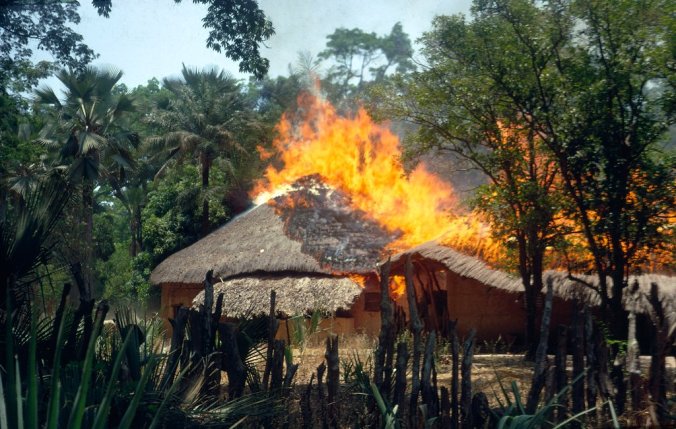 A village house on fire in Casamance, Senegal.Photo: Africaborn, creativecommons

The conflict in Casamance, in southern Senegal, fought between the Government of Senegal and the separatist movement, the Movement of Democratic Forces of Casamance (MFDC), is the longest-running conflict in Africa. As a separatist movement, the MFDC started agitating for independence from the north in the early 1980s, but as a political movement, its foundation dates back to the 1940s under French colonialism. Today, the MFDC has been reduced to a splinter group, carrying out banditry to make ends meet.

The Casamance conflict has claimed more than 5,000 lives in a region with 1.6 million inhabitants (Senegal’s total population is around 16 million). As evidently documented by researchers, the MFDC had enjoyed the support of both Gambia’s Yahya Jammeh and some influential elements in the government of Guinea Bissau in the form of arms supply and sanctuary. This role bred a bone of contention between the government of Senegal on the one hand and Bissau and Banjul on the other.

After more than three decades of low-intensity conflict, the MFDC has become weak. The question of how the MFDC has lost legitimacy, support and strength is, therefore, a significant one, because both Guinea Bissau and The Gambia have a tiny presence of the Djola people; and for the case of The Gambia, its former President, Yahya Jammeh, is a Djola. This geographical and cultural connectivity has contributed to making the Casamance conflict vulnerable to the social and geopolitical dynamics of the region.

When Abdoulaye Wade came to power in Senegal in 2000, after nearly three decades of politicking, he espoused a different strategy from that of his predecessor, Abdou Diouf, under whose presidency the conflict erupted. While Abdou Diouf responded with force, Wade, as a rational calculator, responded with pragmatism, by reducing the role Bissau and Banjul played in serving as mediators. He saw larger meetings as a waste of time and resources, so he limited the involvement of both Bissau and Banjul.

Before Wade came to power, Guinea-Bissau had been embroiled in a civil war that resulted from the sacking of the chief of the armed forces, Gen. Ansumana Mané, by the president, João Bernardo ‘Nino’ Vieira, a man Senegal had counted on to help eliminate the MFDC. Mané received support from the MFDC during the 11-month civil war and Nino accused him of supplying arms to the group. The war resulted in a government of national unity, which lasted until Mané and his forces finally ousted Nino in 1999. A presidential election swiftly followed, bring Kumba Yala to power. The death of Mané the following year led to a purge of MFDC sympathisers from the Bissau army, and consequently, the gradual weakening of the MFDC.

Wade, an adept diplomatist, asked the UN to deploy its observers on the Guinea-Bissau–Senegal border, because of regular cross-border skirmish between MFDC fighter and the Senegalese soldiers. This ruffled feathers in Guinea-Bissau. Yala, constrained by the power struggle with Mané, urged the UN to refuse Wade’s request. Despite this, Wade found in Yala someone who wanted to help solve the Casamance problem. This would mark the beginning of what would become Guinea-Bissau’s gradual disengagement from the MFDC.

At the domestic level, Wade included two ministers from Casamance in his cabinet. He replaced the mayor of Zigunichor with a Southerner, in order to integrate the people of Casamance in the administrative affairs of the country; and he also visited Casamance to show that the region could not be separated from the rest of Senegal. Wade, by talking to certain actors in the MFDC and not others, widened the split within the movement between Rev. Augustin Diamacoune Senghor, a Catholic priest – Wade’s preferred man – and Salif Sadio, the leader of a belligerent faction accused of attacking civilians and military personnel.

When Macky Sall in 2012 succeeded Wade, he found a divided MFDC, a decentralising and democratising country initiated by Wade in the early 2000s, and a limited role for Banjul and Bissau in Casamance peace initiatives. Whereas Wade had made his first official overseas visit to Guinea-Bissau, Sall headed to the Gambia. With a new government in Bissau sensitive to Senegal’s concerns, Sall had his eyes fixed on the role played by another MFDC sympathiser in the person of Yahya Jammeh. This would mark the beginning of a pragmatic diplomacy that would see Sall as Jammeh’s political nightmare.

When Gambians voted in the presidential poll in 2016, Senegal was on alert. The victory of the Gambian opposition over Jammeh gave Senegal a political card to finally eliminate the MFDC’s main man in Banjul. However, when Jammeh refused to step down, Sall initiated Senegal’s most concerted diplomatic engagement for years, mobilising regional and international support to topple the unpopular regime. The fall of Jammeh could be seen as the biggest political setback for the MFDC since the death of Mané, as the movement lost both sanctuary and a patron.

The people’s desire for peace

When the Casamance conflict erupted in 1982, women played a significant role in supporting the move for independence. Research has shown that the role of women in armed conflicts has always been underreported. In Casamance, however, the MFDC could not have endured for so long without the women’s support

Senegal is rich in culture and tradition, so the relationship between the ethnic Djolas who dominate the MFDC, and the Wolofs and Serers who are found mainly in the north revolves around what anthropologists call ‘Joking and avoidance’. According to this notion, the Djolas and the Serers are, among other things, not supposed to spill each other’s blood.

Initially, the ‘traditional disdain’ for the Djolas by the Northerners might have been one of the reasons for the conflict. But as Casamance began to trek on the path to modernisation, grassroots initiatives emerged, making use of the joking relationship between this various ethnic groups, thus creating an aversion to bloodshed.

The conflict in Casamance, which the MFDC initiated, has now been reduced to banditry, carried out mostly by splinter elements to keep their heads above water. This could not have been possible without the decentralisation of politics in Senegal and the political pragmatism of Wade and Sall.

This extract is part of an academic thesis on Peace and Conflict Studies. A complete version can be provided upon request, contact Amat Jeng, email amatjeng@icloud.com.