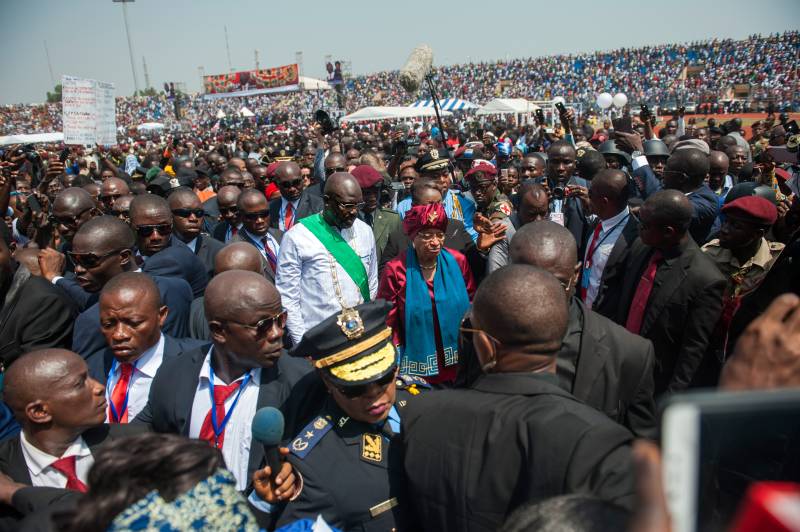 George Weah with Ellen Johnson Sirleaf at the main stadium outside Monrovia where he took the oath of office as president on 22 January 2018. Photo: UN Photo/Albert Gonzalez Farran

Liberia’s new president George Weah has promised to bring change to his country. However, according to NAI researcher Anders Themnér, rather than putting an end to old structures based on corruption and nepotism, the Weah presidency is likely to see the return of groups connected to convicted war criminal Charles Taylor.

In the eyes of many young Liberians, their newly elected president, and former star footballer, George Weah stands for hope. He was elected on a promise to create jobs and fight corruption, two major challenges in a country where 54 percent of the population live on less than $US2.00 a day according to The World Bank and misuse of public funds is endemic at every level of government. Furthermore, unlike his predecessors, Weah was not involved in the Liberian civilian war (1989–2003), in which 250,000 people were killed.

“During the presidential campaign, he created an image of himself as a man from the slums, a good-hearted football player who did not carry the same baggage as other politicians”, Themnér says.

However, his chosen Vice-President Jewel Howard-Taylor has a very different background. She is the ex-wife of former president and convicted war criminal Charles Taylor, whom she divorced in 2006. Howard-Taylor is a powerful figure in the National Patriotic Party (NPP), which her ex-husband founded. She is an experienced politician, having served as senator since 2005 and before that as a high official in the Taylor government from the late 1990s.

Themnér says that similar alliances are common in Liberian post-war politics, as candidates seek to win support from different ethnic and regional groups or from supporters of former armed groups. Fifteen years after the civil war ended in Liberia, much of the political and economic power in the country is still in the hands of elites connected to the war.

Weah ran for president of Liberia in the 2005 elections, forming the Congress for Democratic Change (CDC) to back his candidacy. Weah was a very popular figure in Liberia, but he lacked political experience. In the end, he lost to Harvard-educated Ellen Johnson-Sirleaf who had managed to build support among a wide range of former military leaders.

“Weah relied on the popularity he had gained as a football player, but eventually lost because he had failed to build alliances.”

Howard-Taylor has repeatedly denied that she will use her position as vice-president to pursue the agenda of her former husband. However, she belongs to the party he founded and, according to Themnér, there is no doubt that former Taylor allies will be expecting to gain access to political and economic resources.

“These individuals found themselves out in the cold for 10 to 12 years during the Ellen Johnson-Sirleaf presidency. Now they will expect to be let back in again.”

During his first month as president, Weah has appeared determined to replace the bureaucracy of outgoing president Johnson-Sirleaf with people loyal to his own CDC party. He has frequently invoked Article 54 of the Liberian Constitution, which gives the president far-reaching powers to appoint cabinet ministers and government officials. Members of Howard-Taylor’s NPP have complained about not being properly represented in the appointments announced so far, receiving only two deputy minister positions.

Themnér says that it is too early say how much influence Howard-Taylor will actually have over the president. However, he says that Weah’s choice of alliance partners has made the creation of a war crimes tribunal – to try individuals for crimes committed during the civil war – seem increasingly unlikely.

Many local NGOs and members of the international community have long called for such a tribunal. However, many Liberian leaders such as Johnson-Sirleaf have not supported the idea, since they are also implicated. With a new president who was not personally involved in the war, some observers have been hoping the creation of a tribunal will go ahead.

“With Jewell-Taylor and Prince Johnson in his corner, both intimately connected with former armed groups, George Weah is not likely to push for a tribunal.”

Themnér also expresses doubts over Weah’s ability to successfully fight corruption. His political inexperience, the expectation of compensation from those who voted him into office and the fact that Weah himself has been accused of mismanagement of funds from candidates who paid to run on the CDC party ticket are all factors that count against him, according to Themnér.

Themnér says that Weah faces a difficult balancing act in trying meet the expectations of competing groups who see him as their president.

“The big question is how broad and inclusive he will be. Can he deliver on the promises he made as ‘the candidate of the poor’? His supporters will expect to be given jobs and resources – and in a patronage system that typically comes at the expense of someone else. Will he be strong enough to bring change to those who voted for him without excluding other groups?”

While it is uncertain how the Weah presidency will affect the lives of people in Liberia, the election process that brought him to power is a cause for celebration in itself, according to Themnér.

“Every peaceful transition of power from one elected leader to another is a huge step in the right direction, as these are among the most vulnerable situations when building a peaceful and functioning state. If these transitions work in Liberia, it is a very positive sign for peace.”

Sworn in as president on 22 January 2018. Born and raised in a poor district of the capital Monrovia. Member of the Kru ethnic group, who come from southeastern Liberia. As a professional football player, he was awarded the Ballon d’Or and named FIFA Player of the Year in 1995. During his playing career he became a UN Goodwill Ambassador

Current vice-president of Liberia. Has a degree in banking. Married to Charles Taylor from 1997 to 2006. While Taylor was president, she held a number of official posts, including deputy governor of the National Bank of Liberia. As a senator, in 2012 she attempted to introduce legislation making homosexual activity a first-degree felony that could lead to the death penalty. The bill was not passed.

President of Liberia from 1997 to 2003. Has a degree from Bentley College in the US. Trained as a guerilla fighter in Libya in the 1980s. Headed Libya-backed rebel group the National Patriotic Front of Liberia. Became one of the most notorious warlords in Africa. In 2012, a UN Special Court sentenced him to 50 years in prison for crimes committed during the civil war in Sierra Leone (1991–2002). The presiding judge said he was responsible for “some of the most heinous and brutal crimes recorded in human history”.