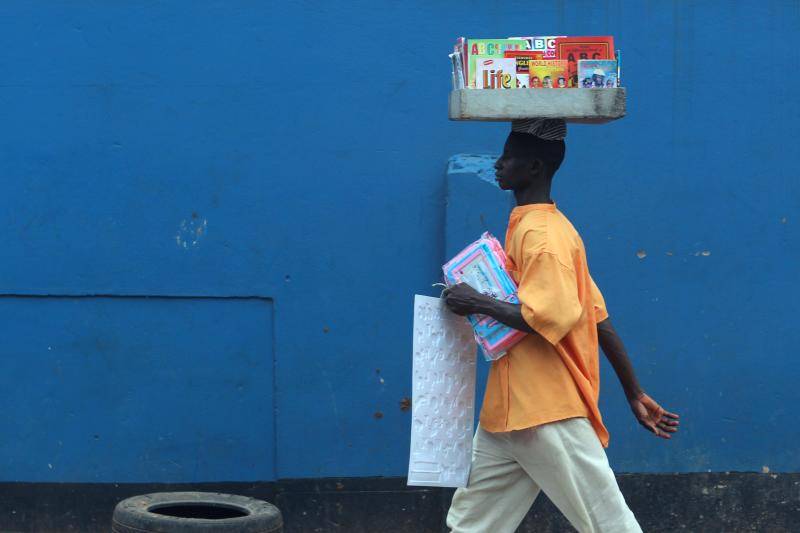 Work on the 14th issue of the Africa Yearbook, about the year 2017, is about to start. NAI Senior Research Associate Henning Melber is co-editor of this annual outlook for all Sub-Saharan countries and sub-regions, and has been from the start.

Melber came up with the idea of turning an originally German project into an international publication in English when he was research director at NAI. The Africa Yearbook has been published since 2003. The long sequence is one of its great attractions.

“Every year more value is added, as you can follow what happens in each country year by year”, Melber observes.

The book is published as a collaboration between NAI, the German Institute of Global and Area Studies (GIGA) in Hamburg, the African Studies Centre Leiden and the Center for African Studies at the University of Florida. Since 2015, it has also been possible to buy a compilation of the chapters, covering the whole timespan for selected countries.

Melber is co-editor of the Southern Africa region.

“The forthcoming yearbook for 2017 will include some very interesting developments in my region: the change in policies in Angola, the build-up towards the African National Congress party congress in South Africa and, of course, the ousting of Robert Mugabe in Zimbabwe.”

In January each year, the writers begin working on their chapters about the past year, the finished book is printed in October.

“The print version is not widely distributed as the Yearbook is increasingly published in electronic format. For instance, all major American universities have such subscriptions.”

In 2012, the Yearbook received the Conover-Porter Award, from the Africana Librarians Council of the African Studies Association, based at Rutgers University, for outstanding Africa-related reference works. Scholars checking facts are the most frequent users, but it is also intended as a reference tool for diplomats, people active in development cooperation and NGOs.

“A lot of people who would benefit from the Yearbook actually don’t know of it. My wish is that all embassies in African countries would subscribe”, Melber says.
Democracy in decline
Edalina Rodrigues Sanches is writing the chapter on Zambia. One of the trends she plans to highlight in the upcoming Yearbook is negative development in relation to democracy.

“There has been backsliding towards authoritarianism since the Zambian general elections of 2016. The leader of the opposition has been arrested on a charge of treason, parliamentarians of the opposition party have been suspended, and emergency powers have been invoked to maintain order after a series of riots in the capital Lusaka”, observes Sanches.

Another important trend has to do with the Zambian economy, which has been under strain for the past couple of years.

“The challenge is not so much lack of GDP growth, as the fact that the public debt has been increasing at an unsustainable pace, according to a recent assessment of the International Monetary Fund. The government is negotiating with the organisation about new loans.”

Sanches notes that the movement towards authoritarianism, as well as having to negotiate with donors about the economy, are issues Zambia shares with neighbouring countries; for instance, Zimbabwe.

She is pleased to be part of the team behind the Africa Yearbook.