The decay of the ANC: From liberation movement to a party in disarray 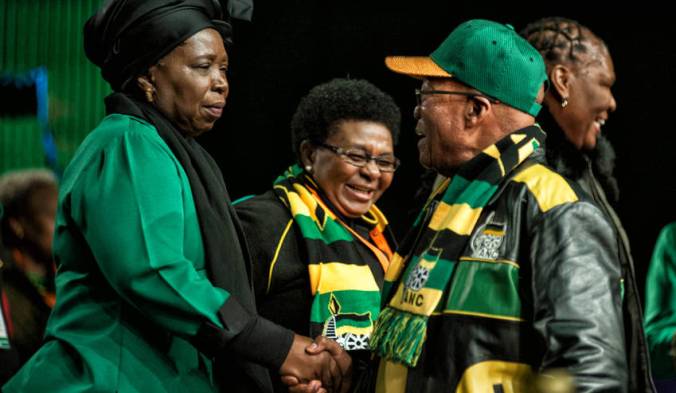 The 54th elective conference of the African National Congress (ANC) started with some expected hiccups when the registration process for the over 4,000 delegates from the different provinces was interrupted by a court verdict which forced the National Executive Committee to hold an emergency meeting: court judgments against the KwaZulu-Natal, Free State and North West’s Bojanala regional conferences had ruled that the processes were flawed and marred by irregularities.

More than a hundred nominated delegates were considered to have obtained their positions by fraud and were barred from voting.

External link. Given the neck-to-neck race between the two presidential candidates Cyril Ramaphosa and Nkosazana Dlamini-Zuma, who both claim to have sufficient support to be elected, these votes (claimed to be in favor of Dlamini-Zuma) could play a decisive role.

The prelude is symptomatic for the drama unfolding since a longer period of time. The in-fights document the continued decline of a former liberation movement in political power. Since the icon Mandela retired from active politics, the ANC’s support base has eroded. A party machinery disclosing the limits to liberation and the betrayal of most values by the Freedom Charter

External link.adopted in 1955 and demanding equality, freedom and justice, created new space for old and new political parties challenging the dominance. But as in other former liberation movements, the knee jerk response by those in denial of betraying the anticolonial struggle’s vision for social justice dismisses any challenge as remote controlled efforts for ‘regime change’. Such arrogance of power seeks reasons for a decline in popularity only in promoting a conspiracy theory. It puts the blame on a plot by the enemies of the people, including the media, the judiciary and NGOs, as well as the private sector and the political opposition, as specified by president Zuma in his opening speech to the congress

External link.. Through such a lens, a democratic process resulting in the election of others into political power is tantamount to regime change

External link.. In such logic, rulings as the one on the ANC delegates are dismissed as undue interference. Reportedly , ANC Youth League president Collen Maine, a Dlamini-Zuma supporter, accused the judiciary of being “very political”

External link.. As he maintained, despite such interference

“agents of white monopoly capital will not lead”.

Such absurdities setting the tune for the showdown at the conference were documented widely in the build up, when the Zuma camp claimed to represent economic transformation in defiance of “white monopoly capital” while the systematic plunder of state assets and resources under the Zuma administration had reached hitherto unprecedented dimensions and created with “state capture” the new synonym for the ANC government and its looting of the country’s public purse. Only in October the Supreme Court of Appeal ruled that Zuma will again be dragged to court and prosecuted for 783 charges of corruption, money laundering and other criminal transactions

External link.. The legal proceedings had been set aside eight years ago to allow him to resume office as the country’s president, which paved the way to pursue his fraudulent self-enrichment further. But in sheer irony, the largest single corporate fraud hitherto discovered in South Africa’s history emerged since then not through the systematic plundering of public funds by the Gupta brothers in cohorts with Zuma and his minions, but by a globally operating ‘white’ corporate entity Steinhoff

External link.. Its large-scale audit and accounting manipulations (rubberstamped by a global audit firm) were originally discovered at the German listed parent company and further traced in South Africa. By mishandling government pension funds, it is estimated that it robbed the state of at least 12 billion Rand.

One wonders who are indeed the biggest gangsters in democratic South Africa within a system, which by looting the state controlled resources displays almost symbiotic links between organized crime in all forms and cohorts in government and the public administration, the state owned enterprises and the security branches. Dlamini-Zuma did not even bother to convincingly dismiss the accusation (supported by visual documentation through photos showing her in the company of the unsavory entrepreneur) that she received donations for her campaign from a kingpin in the lucrative business of cigarette smuggling

External link.. Meanwhile, Ramaphosa had to limit the damage of a deliberate indiscretion, which dragged into public domain his extramarital affairs

External link.. But throughout the campaign trail he was not even by the opposing camp forced to revisit his role in the massacre of striking miners at Marikana. It almost seems as if such involvements with fatal consequences for common people murdered in cold blood are considered these days as an integral part of the political profession within the higher ranks of the ANC and not as immoral as playing around. As pointed out by Richard Poplak

“Laughably ‘radical economic transformation’ (a wacky buzzterm better described as ‘hyper-accelerated unguided wealth redistribution’) is facing off against Ramaphosaism (basically, Angela Merkel’s Germany without an operational economy). How these two sides are supposed to reconcile with each other employing the essential element of politics – compromise – is beyond the ken even of metaphysics. (…) Ultimately, this fight is about how the spoils of the state are spread around.”

And so the ritual unfolds, pretending that the congress and its elections are about finding the best option for post-Apartheid good governance in a country, which despite its wealth remains among the most unequal societies on our planet. Where race is regularly used as convenient smokescreen to cover up realities of an unashamed predatory capitalism, which – independent of race – is purely guided by the looting of the resources at the expense of the ordinary people for the benefit of a few.   A most appropriate assessment of what to expect has been made in a pre-conference analysis by Mashupye Herbert Maserumule

External link.. Warning of the misleading implications of appealing to unity in the party ahead of the elections, he reminded us:

“The contest for the leadership of the ANC is in fact about proximity to state resources, not restoring its foundational value (…) it’s important to remember that when the ethical edifice collapses, society becomes the victim of the leadership of scoundrels.”

Not surprisingly, tales of bribery and vote buying have accompanied the nomination of delegates to the congress and their registration since weeks. It almost seems that the winner will be the one who was better in pulling the strings. For those aware of the survival abilities of Jacob Zuma this is not of much comfort, given his talent to literally laugh off any form of threat to his kleptocratic running of the office. It therefore is also of concern that just now the most draconian state of emergency laws are in the pipeline, which would allow the head of state far-reaching executive powers to act again in his own interest alone

External link..  As president Zuma declared in the opening speech to the congress

External link., after the end of Apartheid

“we had to implement more radical measures to realize the injunction of the Freedom Charter that the People Shall Share in the Wealth of the Country or alternatively, we had to accept that it would forever remain a dream.”

The outcome of the conference will impact on the party’s further course and most likely also on Zuma’s future. But the promise and dream of emancipation from the colonial yoke for the benefit of the ordinary people through a former liberation movement now in power will remain just like elsewhere in the sub-region an empty promise and dream. The conference will therefore not solve the party’s problems, and not those of South Africa. As diagnosed by Eusebius McKaiser

“Whoever wins this weekend, the country will remain in trouble for a while yet.”