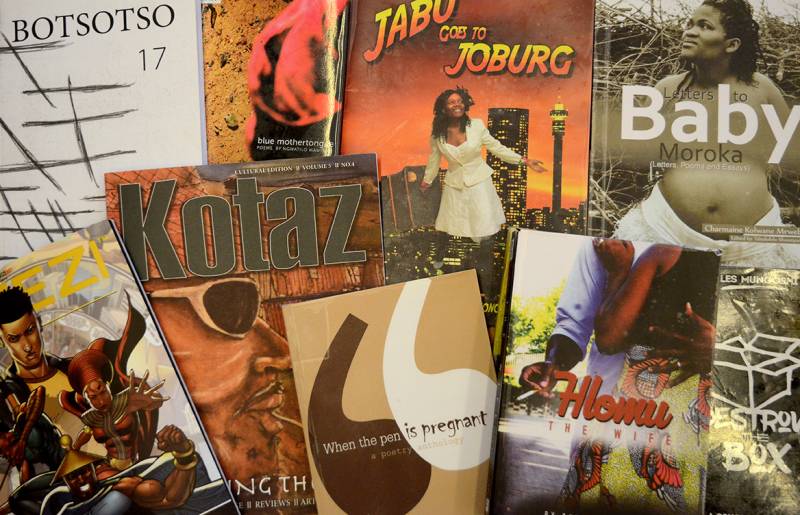 Some of the new titles you can find in the NAI library.

New forms of literature are emerging in African megacities, outside the established publishing industry. The African Street Literature project aims to make such material accessible through the NAI library, and to explore how the urban context is affecting literary form.

The starting point for the project was the frustration felt by Ashleigh Harris, senior lecturer at the English department of Uppsala University.

“I was working on an academic book about the African novel, and in the research process I was struck by the extent to which the publishing industry limits the material we scholars have access to”, says Harris.

The publishing industry limits the material we scholars have access to

Texts by successful writers who no longer live in Africa –superstars such as Chimamanda Ngozi Adichie – are by far the easiest to find and access. But through her own studies in South Africa and Zimbabwe, Harris has become aware of thriving literary scenes outside the publishing industry and library distribution.

“Some of the most interesting contemporary literature in Zimbabwe falls under the radar. In Harare, there are really only two publishers in operation, yet there is a rich literary culture. I realised I had to shift methods to get my hands on it”, observes Harris. 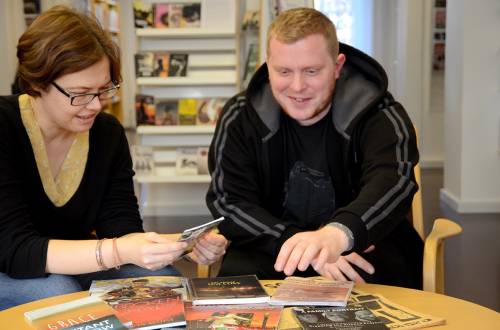 Harris and Hållén in the NAI library.

Her colleague Nicklas Hållén, who primarily studies West Africa, shared her concerns and frustration. Together they started outlining a project to challenge their own methods for collecting material, but also to explore how literature functions in, and is shaped by, the extreme social pressure that is prevalent in most African megacities.

The project covers emerging literary forms such as digital and spoken word poetry, blog fiction, street theatre and graphic novels, but also alternative ways of publishing novels and short stories. The NAI library has been instrumental from the outset in developing ways of categorising and making searchable a very diverse material, which also includes internet links and YouTube clips.

“The staff have been very helpful. They also made us realise this project could be much bigger than our original more modest intentions”, says Harris.

Last summer they visited Johannesburg and Harare. Lagos and Nairobi are on the schedule for 2018 and 2019. Depending on funding they hope to expand the project to more cities.

“We are aiming to bring fresh material into the field of African literature: material that is usually absent from the field”, says Harris.

The literary producers they met were anxious to be involved and actually started supplying material themselves.

“A lot of the writers have very high ambitions – their works are not meant as underground literature. They want to be published and marketed as professional writers”, says Hållén. 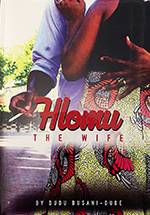 A successful example, now in the collection at the NAI library, is romance novel Hlomu The Wife by South African writer Dudu Busani-Dube. The novel began as chapters that she posted on Facebook, which her friends shared.

The chapters went viral, and Busani-Dube decided to publish the whole novel as a print-on-demand book, which is now sold in ordinary bookshops.

“According to one book seller I talked to, Hlomu The Wife is the best selling book in South Africa at the moment. Busani-Dube is now writing her fourth novel and she is still self-publishing”, says Harris.

The collection at the NAI library ranges from small photocopied collections of poetry to fotonovelas, comic books, literary magazines and plays.

Motivational or confessional literature serve as models for many works and social critique and change are frequent themes.

“You often find a belief in the power of the written word that you don’t get in modern mainstream Western literature”, observes Hållén.

Next on the agenda for the project is a blog that Harris and Hållén plan to launch in December, with guest bloggers covering other languages than English. Harris and Hållén are also hoping for funding to bring young African poets to Sweden for reading tours.

Collecting African street literature at the NAI library creates new opportunities for literary works to reach new readers and researchers. The process is also a bibliographical challenge that could break new ground for making different kinds of literature accessible.

“Developing methods is very exciting for us, professionally. Literary form is the starting point, but the works are very different”, says chief librarian Åsa Lund Moberg.

The NAI library is planning to share its experience of the project; for example, by publishing articles in librarians’ trade press. Integrating the works in the collection will make them accessible in many new ways. Readers at Nordic libraries can reach them through national library catalogues, such as Swedish library service LIBRIS

External link, opens in new window.. For researchers globally, works will be searchable through databases including ilissafrica

External link, opens in new window. and AfricaLit Plus

“African writers who are unable to publish in the traditional way can reach out much further through our collections. This is very much in line with the aim of NAI to disseminate information about Africa”, says Lund Moberg.