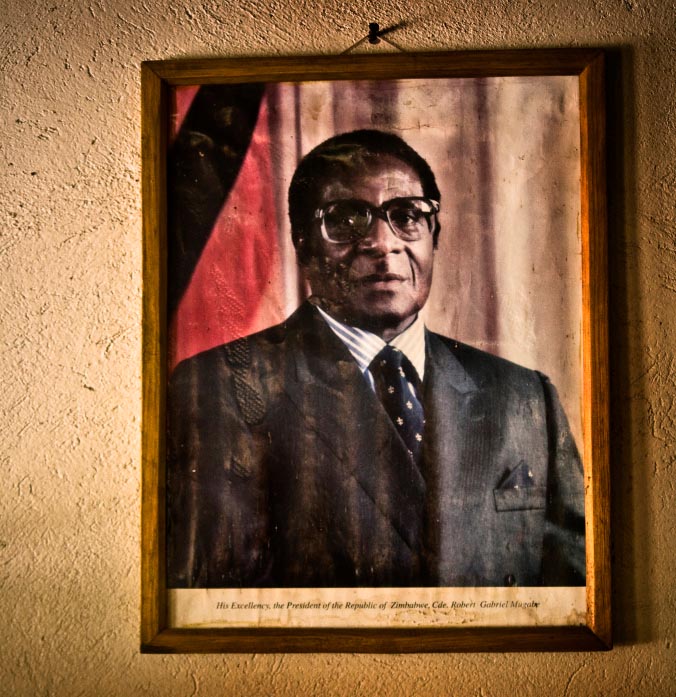 One of the most remarkable experiences in my research was a field trip to Harare, the capital of Zimbabwe, in the summer of 2006.The aim was to better understand the role and effects of international sanctions and blacklisting of leaders, in this case the Zimbabwean power elite.

Disembarking the plane at Harare International Airport, recently renamed Robert Gabriel Mugabe International Airport, I carried with me a list of names of senior officials in the government of President Robert Mugabe and leading representatives of Zanu-PF, the ruling party in Zimbabwe since independence in 1980. I had taken the names from the European Union (EU) sanctions database.

To carry out my research, I enrolled at a local NGO who gave me an office, a computer and a telephone. I had a base for my work.

My research followed a tradition in the field of international relations, studying sanctions through the lens of power projection. Norwegian sociologist Johan Galtung, the principal founder of the discipline of peace and conflict studies, laid the foundations of the most widely recognised sanctioning theories following a visit to Rhodesia in the 1960s.

Galtung identified the so-called naïve theory of sanctions. ‘Naïve’ referred to how the states of that time used sanctions.Galtung saw that all-inclusive international sanctions against Rhodesia’s white minority regime, under Prime Minister Ian Smith, strengthened rather than weakened the power elite.

Some 40 years later, the sanctions instrument has evolved from focusing on countries to focusing on individuals.

Now I was in here in Harare to test how individual sanctions worked. How did the EU and US international blacklisting work, and what effect did it have on Mugabe and his cronies? More precisely, I was trying to understand what targeted sanctions actually meant.

One of the names on my list was the minister of agriculture. I contacted the government offices in Harare to ask for an interview. To my surprise, the ministerial office approved.

I spent the days before my meeting with the minister visiting the journalists at the main newspapers in Harare; among others the state-owned daily paper The Herald. Early on in my research, I got the feeling that there was a different dynamic to the sanctions issue than prevailing attitudes in Brussels and Washington, DC suggested, which spoke of the stigma of being blacklisted.

However, what I saw was that, just as Galtung had identified in the 1960s, the state had set up a propaganda machine to meet the world’s sanctions head on. Headlines in daily papers in Zimbabwe screamed about how Western superpowers were targeting black Zimbabweans in general. Zimbabwean media labelled the sanctions as economic warfare, propagating the view that short-term interests of white capital in London, Washington, DC and Brussels were driving them. This starkly contrasted with the view of the sanctions imposers in the EU and US, that sanctions were a response to suspicions of vote-rigging in the 2002 elections. Nonetheless, Mugabe’s inner circle said they were to do with white Zimbabwean landowners’ protests against Mugabe’s land redistribution reforms. The white landowners, the government argued, had close links with the British upper classes.

In response to the stories in the Zimbabwean state-owned media, the US government published the names of those blacklisted in one of Zimbabwe’s major newspapers, emphasising that the sanctions were targeting them and not the Zimbabwean people as a whole.

At the time, it seemed that the newspapers were writing about the sanctions every day. For me, they were an exceptional source material, reflecting a decisive phase in the history of the country. I brought a selection of newspapers back with me to the NAI library for documentation.

What happened to my meeting with the minister?It was scheduled for 10 o’clock and I arrived at the ministry well in advance. The clock struck 10.No minister.Time passed and I began to doubt the meeting would take place after all.But I didn’t give up. I stayed outside his office until late afternoon.

While I was waiting, I thought about whether I should interview the ‘private’ person or the ‘official’ one. Which of these people was it whose money had been frozen? Who was the person on my blacklist: a symbol of the regime or an individual? As in other non-democratic countries, the difference was sometimes hard to make out, since public finances were often used privately.

The minister finally showed up, grim-faced but ready to invite me into his office.The interview lasted about an hour and I felt he answered my questions relatively honestly.He described how he had tried to buy agricultural machinery from abroad, for the benefit of the Zimbabwean state, with his own private funds, but his attempts had failed due to the sanctions.

The minister also described how difficult it had been to represent the Zimbabwean people internationally, not least because he was unable to travel to many countries due to the travel ban. In other words, the sanctions had affected him both in his private and official capacities. I reached similar conclusions in my interviews with other Zimbabwean government representatives.

Overall, there was little proof that the sanctions made any significant difference to politics in Zimbabwe. Much evidence pointed to Gaultang’s naïve theory still being relevant. The state’s use of propaganda to respond to the sanctions had created a public sense that the country was under siege. The more vulnerable and constrained the people in power felt, the tighter they squeezed their grip. Being marked out for sanctions became a badge of honour and a proof of one’s loyalty to the regime.

Western governments’ sanctions against Zimbabwe were in place for many years.The breadbasket of Southern Africa saw its store shelves being emptied; queues for fuel grew longer and power failures became part of everyday life as infrastructure cracked.The sanctions were one component behind this, Zanu-PF and Mugabe’s abuse of power another.

The international community’s inability and unwillingness to constructively deal with Mugabe has had catastrophic problems for the country, the region and the Western world’s relationship with the entire African continent. For example, the EU – Africa dialogue was negatively affected as a result of the EU-lead blacklistings.

Whether the Mugabe and Zanu-PF era is over, and whether current events in Zimbabwe will lead to democratisation or continued dictatorship, remains to be seen. But the legend of Mugabe will live on long after the regime has come to an end. The international community should be aware of this when thinking about sanctions in the future, both in relation to Zimbabwe or more generally. Any undemocratic practise will surely mean more sanctions. This time, it may well come in company with the African Union as it has developed its own sanctions practice.