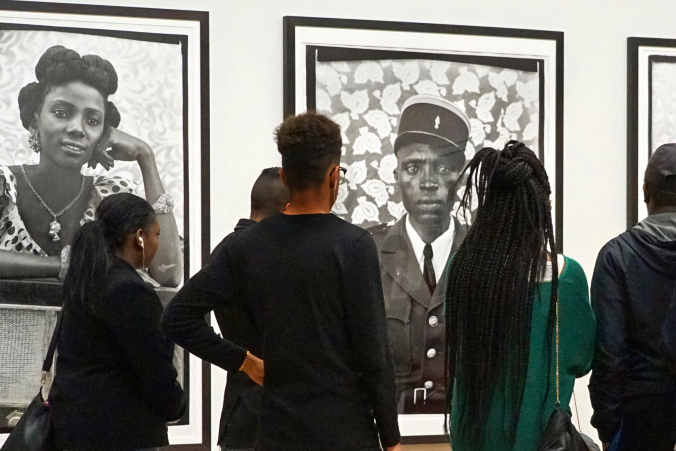 While it’s inarguable that the resurgence of asserting a space for contemporary African arts on the global art scene is growing stronger, undeniable questions regarding positionality remain: what is acknowledged as art and who is the art intended for?

There is a rapidly growing interest in contemporary African art, both for the marketable public as well as for private display and profitable interest. However, it seems that what was previously involved and concerned with bringing forth African contemporary art to be recognised globally, has neglected to also consider the materialising concerns for local makers as a result of shaping markets and spaces. In the recent year of 2016, contemporary art production from Africa has seen a rapid growth in a relatively young market.

In 2016 alone, the New York Armory show “African perspectives” under the lead of curators Yvette Mutumba and Julia Grosse displayed works from Africa and the Diaspora in 14 galleries. Subsequently, the fourth of edition of the Contemporary African art fair 1:54 at London’s Somerset House attracted unexpected numbers of visitors (Peus:2016). And on the continent alone, the already prosperous Joburg Art Fair increased its sales by nearly twice the amount forecasted (ibid).

It’s easy to state the success of these markets are attributed to a pandemic interest in Contemporary African art on the continent and abroad, encouraged by a wish to diversify spaces and encourage moreover reposition interest in what is still an underrepresented market. But under any circumstances, the modern and contemporary African art market has yet to reach the level it is portrayed to have. According to the European Fine Art’s (TEFAF) market report from 2016, contemporary and modern African arts only account for approximately 22 million dollars – less than 1 percent of the global art market revenue of 63.8 billion dollars. (Pownall :2016)

Thus, as a viewer and appreciator, I am nevertheless wondering, who are the actors that shape this discourse? And how do we engage with these understandings, which shift beyond the current mainstream appraisal and visual conceptions of gazing Western curators in conjunction with audiences? But most importantly, in terms of globalised contexts relating to cultural and political visibility, where does Contemporary African arts position itself?

In the time of initiating my research on Seydou Keita, I often found a consistency of raving articles about the burgeoning contemporary photography arts markets, and what it initially evoked in me was the awareness that, discourses about contemporary African art, or specifically African photography, are in fact represented within public discourses and domains of art. And I strongly argue, that following the mid 1990’s photographs by Malian photographer Seydou Keita, with their carefully staged aesthetical strategies of repetition and symmetry continue to both produce imitation and touch upon subjects of displacement, belonging and self-imagination, for viewers that comprehend the visual relationship of the work, as they shifted locality constant display in Western museums and achieving acclamation, emerging Keita as a photographer, who’s name was once lost (Bigham,1999, p.63), both transformed wider non-continental African audience’s perception of Contemporary African art, but also came to symbolize the artistic passages and artistic dilemmas of following West African studio photographers who’d have their works recognised globally, notably fellow Malian Malick Sidibe.

By way of Keita’s works migrating from his Malian studio which operated between 1948 to 1962 (Magnin,1997,p.9 in Bigham,1999,p.61) to curator Susan Vogel’s 1991 exhibition titled “Africa Explores”3 at the Centre for African Art of New York and leading to the Contemporary African Art Collection4 by the Pigozzi Collection Institute and so forth (ibid), demonstrates the complexities and newer dimensions of authorship stand to make focal point of the social trajectories that exemplify the cultural commodification process which determines artistic works value, as we continue to see with West African studio photography under the overall banner of Contemporary African art.

Homid Bhabba has notably delineated this framing as the “third space”, meaning apperception which is shaped through an interaction with the other. This conceives a hybridity process which “gives rise to something new and unrecognisable” (Kalua, 2009, p.26), or in other words, it gives rise to a created “other”.

I would propose Keita’s enduring artistic and marketable profit, is remarkably owed to a strategic commercial interpretation of his works by French curator Andre Magnin (ibid). In stark contrast to his enduring fame in Mali, Keïta’s anonymity in “Africa Explores”, his first exhibition outside of Africa in 1991, reveals the complex shifts which authorship undergoes when located within different cultural settings. This is especially noticeable when the cultural context to where the work is transferred, defines its conception of authorship through either viewer’s knowledge or trademark. When Keïta’s prints were enlarged and exhibited, the valorization of his work also initiated a gradual process. By being exhibited as unknown in “Africa Explores”, the valorization of his works shifted from domestic spaces in Mali to art institutions, firstly rendered his works to suddenly become considered as objects of art and secondly to become the object of Vogel’s representation of “contemporary African urban art.”

The absence of Keïta’s name functioned to give a detached and general overview/representation defining an artistic canon without taking into account the alternative historical trajectories which shape that canon. That black and white studio photography suddenly becomes an emblematic reference of Contemporary African arts for Western audiences. Overshadowing this is new mediators (curators, critics and dealers) who, according to Keller, are authoritative agents in continuing this frame. It is through this canonization that the authoritative topic of West African studio photographers, is reframed and redefined through various interpretations to Western audiences. Anthony-Appiah calls attention to, the fact that “to sell oneself and one’s products as art in the marketplace, one must, above all, clear a space in which one is distinguished from other producers and products-and one does this by the construction and the marketing of differences.”

Consecutive is also the permanent reauthorization of Keïta’s work by his viewers based on aesthetic judgements (Bigham, 1999, p.67). Given the continuous relocation of his portraits within different institutions as Bigham proposes, viewers from an institutional or monographic frame, confronted with quantities of photographs, see portraits which are assigned with only one name: Keïta’s. One after the other, the specificity of each image is not observed, but rather it is assumed by the viewer to be a consistent homogenous aesthetic, when in fact each image forms its own nexus but ultimately exists as part of a wider photographic corpus. Such understanding as objected by Bigham, allows for viewers (as I pointed above regarding black and white photography becoming a paradigmatic articulation of West African modernity), to perceive these images as documentation of societal realities when they are not so.

Viewers, assume these images’ denotative characteristics to be visual representatives of social, historical and cultural indications. This reading is inevitable, given the framing of these images which incorporates texts to be interpreted so, as the portraits are framed as, in the instance of Keita’s works, historical insights Mali’s past for viewers of today. The framing seems to extend itself to what Oguibe in “Postmodernism and Contemporary African art” (1999) proposes when he argues the history of African arts is not constructed but rather canonized within a corpus where the African artist acts as a mere observer within a hegemonic discourses, that he or she isn’t permitted self-articulation beyond the boundaries of these constructed disquisitions. (Oguibe, 1999,p. 20; Anthony- Appiah, 1991, p.355)

This construction, extends to the general framing of West African studio photographers, most recently Burkinabe photographer Sory Sanle’s works currently displayed in London. And I believe Magnin’s framing of Keita when his works were becoming widely distributed, established this notion for specialised curators to follow.

Given that Magnin’s curatorial interventions have expanded this particular notion of contemporary African art, these questions become very necessary to consider, as I believe, that his interpretations of contemporary African art through Seydou Keïta have reaffirmed Sallah Hassan’s notion: Africa is rendered a site of perpetual rediscovery. This rediscovery further contributes to marginalising local African art forms or artists whose works reside outside of this theorization. Magnin’s position of Keïta as the studio photographer of Mali has left very little room for either his locally celebrated peers contemporary Malian photographers known or unknown to be considered in an alternate discourse, whilst at the same perpetuating the false notion of “anachronistically characterizing ‘contemporary’ photography in Mali according to black and white film practices from the 1950s to 1970s” as Keller remarked (Keller, 2014, p. 44)

Nevertheless to a certain degree, Magnin correctly identifies transnationalism as a component of his practices through Seydou Keïta because of his photographic medium, and to a certain degree, his way of using it. However, it is evident that his curatorial practices assume incorrectly that globalization in that context takes on a neutral standing. While it may appear, that the notion of globalization itself stands to render null and void the idea of localities, I argue that it in his practice it inevitably actually reinforces these constructed binaries, by positioning Seydou Keïta into a hegemonic commodification discourse so long as his work is ascribed to Western notions of what is deemed contemporary art.

The globalised commodification acquiesced by Hassan, has become a one-sided exchange, which forces locality on African artists by narrating their contemporary practices in relation to the supposed universalism of Western contemporary art rather than regarding it within local contexts of production. This brings attention to the economics of cultural productions which devalues or values African contemporary art in the context of globalisation (ibid). Contemporary African arts and its critical reception globally is readily identifiable with the notions of globalisation and transnationalism; this assumes a free cultural production and sharing. Moreover this assumption is patently false, since the global contacts precisely enforce locality on contemporary Africans through regulations of their movements within its centers (ibid). And this is precisely the general pattern one will observe through the framing of photographer’s artistic journey.

Thinking about the same issue, Von Bismark noted that contemporary curators who specialise in non-Western art, have by large monopolized this role and in their practices aggregated works to construct interpretations which fit into the contemporary frame of reference (Von Bismark, 2012, p.62-63). Hence one wonders about the discursive visibility of art objects and their financial value,which sustains the works of Art fairs and the existence of public cultural and related institutions: in which position does contemporary African art fit into the global discourse and globalization? And how does these globalisation driven shifts reflect in political and cultural visibility? But most importantly, how does an emerging form of imagining local identities situate itself, in relation to cosmopolitanism in the places where it occurs without also subverting or suppressing the local constituency which is pivotal in formulating a newer discourse from its own standpoint?

Awa Konate is a recent Danish-Ivorian BA graduate of Politics and African studies from the School of Oriental and African Studies, University of London. Prior to, and whilst living in London, and pursuing her studies, she has been working as a freelance writer, having works published in both print and digital publications. While completing her bachelor’s degree, she wrote her dissertation on the political analysis of Malian photographer Seydou Keita’s artistic legacy of authorship and power interiorly as well as exteriorly to the context of globalisation.

Her research interest, which has now lead her to pursue a post-graduate degree in Contemporary Art, centres around Contemporary African art ranging from the significance of transnationalism along with globalisation on markets development and cultural moreover political visibility of artists. She is particularly interested in assessing critical art theory’s potential to formate newer curating mechanisms, which enables dialogues calling into question authoritative representation methods of comprehending Contemporary African arts. She has been working on a digital curatorial project titled “Culture Art Society” since 2013.