Zuma survives in office once again – for now 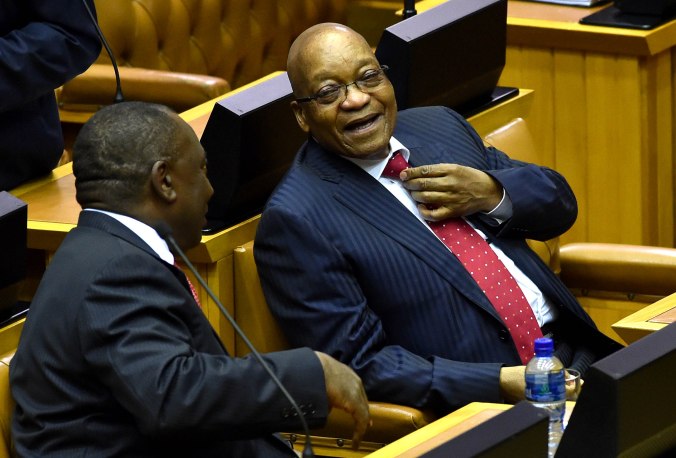 Jacob Zuma during a debate in the National Assembly, June 2017. Photo: GCIS

According to a common saying, a cat has nine lives. Jacob Zuma has at least the same amount. He just survived the eighth vote of no confidence in his illustrious political career.

During the late afternoon of 8 August a total of 384 Members of the 400-member South African Parliament (with five seats currently vacant) casted their secret votes to decide over the president’s fate. 177 voted with yes (for the motion of no confidence), 198 with no, while nine abstained. But while Zuma stays in office for now, the problems in South African politics are far from over.

All eyes are now on the ANC national congress in December this year. The party then has to deal again with the ever-growing voices in its own ranks to replace a widely discredited head of state in the interest of the party. And the forces are in formation on different sides, with Zuma’s choice (his former wife Nkosazana Dlamini-Zuma) and Cyril Ramphosa as the front runners, but several other competitors looking for outsider chances.

While removing Zuma from office now would have been too early as regards the party-internal dynamics unfolding, the writings are on the wall: at least 20 plus ANC MPs refused to toe the party line and voted for the oppositional motion. A clear indication that the ANC is increasingly divided over the strategy: keep Zuma despite his dismal performance as a sign of party loyalty in office – not to be mistaken as a loyalty to him – rather than to succumb to a political opposition’s demand?

Indicative was the debate preceding the vote: not a single speaker spoke in defense of Zuma, who after all is also (still) the party leader. The opposition was eager to explain that the motion is not about removing the ANC from government, but Zuma from presidency. As speaker after speaker stressed, this should be a vote against corruption, state capture and the Gupta clique appropriating state assets big time. In contrast, those taking the floor for the ANC, appealed to their own members to protect the government from regime change and not abandon the party loyalty.

After the motion was dismissed, the opposition parties celebrated the high number of votes supporting the yes, while the ANC members in their majority started to sing and dance in celebration of what they considered a victory. Rather, however, it was avoiding defeat by a margin more narrowly than many might have expected. The major issue discussed afterwards by political commentators therefore was how the party might handle the dissenting votes in its ranks.

A triumphant Zuma celebrated his survival by singing and dancing too. Seemingly unimpressed by the party-internal dissidents, he suggested that their votes were bought. His camp was quick to dismiss the whole motion as a conspiracy initiated by white monopoly capitalism. The pro-Zuma camp has more recently systematically cultivated this populist equation, prophesizing that Zuma’s removal would be tantamount to a counter-revolution.

But what happened was actually more predictable and expected than the hype before the vote suggested. After all, no party in government anywhere would like to be voluntarily pushed by an opposition into voting against its own head of state and party leader, thereby creating or even confirming the impression that its policy was not up to standard. As regards the factionalism inside the ANC, the real litmus test will happen in December, when the party congress decides over Zuma’s succession and, by implication, his future fate.

One also wonders, if the opposition would really have wanted to abandon its most popular campaign argument, that South Africa is governed by a corrupt leader backed by his party despite better knowledge, thereby willing to accept state capture rather than to abandon party loyalty with a thief. At the end, the opposition can still register with a certain amount of satisfaction, that a substantial member of ANC MPs did not toe the party line. A message, which has certainly also been registered inside of the governing party.

But the narratives already emerge, which make use of this fact as an argument that this testifies to the party’s democratic fabric. Among the first voices commenting were those who claimed that this was finally a victory for the country’s constitution and convincing evidence for the state of democracy and good governance. That the Rand as currency improved its exchange rate after Monday’s decision to allow for a secret vote, seems to confirm that this is widely considered as a comforting indicator that not all is rotten in the state of South Africa.

Come year’s end, we will know more as regards this claim or assumption. For now, a power struggle between government and opposition, but also inside of the ANC, has not been decided but an outcome only postponed. The question remains to be answered, if at the end Jacob Zuma has more of the proverbial lives than a cat.