An Anatomy of the Black South African “Middle Class” 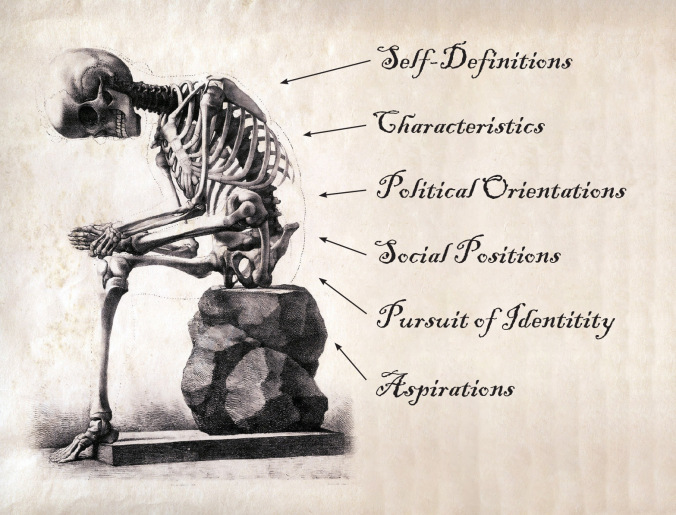 According to figures recently presented by a research project at the Southern Africa Labour and Development Research Unit (SALDRU) at the University of Cape Town, South Africa’s population classified as middle class increased from 12.8 percent in 1993 to 16.6 percent in 2012. Two-thirds of these are categorized as ‘black’. In contrast, 55 percent of the population remain poor, 23 percent vulnerable and 5.2 percent can be considered as elite.

A black middle class in such a socially segregated society merits closer attention as to its definition and its further deconstruction. Which are the characteristics, the aspirations, the self-definition, but also the political orientations of such a group?

Phakati – Soweto’s Middling Class is a documentary produced in 2008/2009 by a team headed by Peter Alexander from the University of Johannesburg (UJ). It illustrates mainly through interviews a research project initiated in 2006. A survey investigated class identity.

In total 2,284 respondents were initially classified. The biggest groups were 582 in formal (wage) employment and 535 unemployed, followed by 309 recipients of social grants or otherwise not in the labor force, 261 students, 251 partial workers and 225 fill ins (the latter two categories were self-employed ‘survivalists’ or in very irregular unemployment). 129 were classified as petty bourgeoisie (self-employed professionals or small businesses not looking for work), 24 as employed middle class (salaried managerial positions) and four as bourgeoisie. In terms of occupational categories, two thirds of the persons were without occupation (being unemployed, pensioners, students etc.).

Respondents were offered a variety of class or status related options for multiple self-categorizations. The biggest group (20 percent of the respondents) opted only for the middle class label. Adding those who registered in multiple categories, a total of two-thirds (66 percent) of the respondents classified themselves as middle class, followed by 43 percent working class, 38 percent lower class and 13 percent upper or top class.

The explanations given by the “middle class” respondents (ranging from a woman being the owner of a company occupying a posh house to an unemployed woman in a shack) were almost stereotype. Those in the upper segment argued that others were better off, while those in the lower segments referred to others still worse off.

When at the end of the film the businesswoman was asked to visit the shack dweller, they both questioned each other’s categorization. The two women were hardly able to communicate, both convinced that the other one was out of her mind by calling herself middle class. But there is some logic and sense to what seems to be an anomaly. According to the study

External link. by UJ researchers Mosa Phadi and Claire Ceruti: ‘Sowetans who declare themselves middle class are thereby distinguishing themselves from mediocrity’. 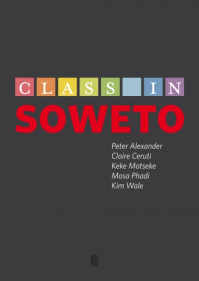 The self-perception clearly had to do with a form of pride, of dignity, and of belonging. The middle class label, Peter Alexander summarizes in the book Class in Soweto, ‘was linked to self-respect, to upward mobility and aspirations’ and ‘regarded as normal, thus neither “above” nor “below” other people’. As he adds further, “class” can be seen as something positive, because unlike “race” it permits upwards mobility. Being “middle class”, therefore, is a desired self-categorization.

While the differences in the social status, lifestyle and (in)security of these Soweto residents are enormous, they all merrily classify themselves as being part of a rather arbitrarily defined “middle”. The self-classification suggests that “being middle class” is a kind of comfort zone despite the daily struggle for survival.

A contrasting analysis was almost in parallel undertaken by Ivor Chipkin of the Public Affairs Research Institute (PARI) in Johannesburg in 2012. 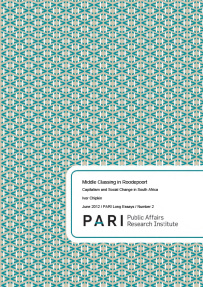 In his essay Middle Classing in Roodepoort: Capitalism and Social Change in South Africa

External link., he studies “middle classness” in the townhouse suburbia of Roodepoort. As a previously “white” residential area of the wider Johannesburg area, it now accommodates components of a black middle class.

Chipkin diagnoses the emergence of a ‘common world’, which ‘is not associated with new patterns of sociability that transcend race or ethnicity’. But assertions that different groups defined by ethnicity would ‘signify antagonistic social positions’ and survive especially among white middle class members, are put into doubt. Instead, such sentiments have been replaced by ‘an openness to black South Africans that may well be unprecedented outside liberal and/or leftist political circles’. Chipkin therefore concludes, that ‘ordinary life refers to the pursuit of identity, of structure, rather than revolt or resistance to it’.

He observes in the Roodepoort townhouse complexes a ‘paradoxical common world conjured into being through a new regime of property right and mediated by body corporates’. And he asserts that ‘spaces of order have been constituted through a regime of (private) property’, which is not necessarily in compliance with ‘a post-apartheid society tending towards socialism or participatory democracy or, at least, subject to the morality of the Constitution’. It is, in other words, the identity of haves, who consider their own possession as the only important point of reference.

This seems to confirm a survey of political attitudes conducted by Bob Mattes in the Afrobarometer project. It suggests that black South Africans enjoying a degree of security and with access to higher education are more likely to support higher-order needs of good governance and self-expression. They are less likely to prioritise the provision of basic goods and services than those worse-off.

The BBC’s “Africa Business Report” televised on 1 and 2 January 2016 a conversation with three South African observers. They were asked for their views on the African middle class. One (himself black middle class) attributed to them not much more than greed and their own individual aspirations to accumulate wealth and status as a generation seeking ‘instant gratifications’ with ‘no loyalties’ to any political or other ideological orientation.

For her Master thesis

External link., Amuzweni Ngoma interviewed members of a black middle class (BMC) in higher professional positions. She concludes that ‘the high levels of intra-racial inequality bond the BMC to race-based alliances rather than class-based alliances’. Occupation and income as class markers do not automatically translate into class identities. But Ngoma also observes, ‘that the BMC is becoming increasingly confident in its class position, a development allowing it to begin critically assessing the wider political landscape’, which also ‘indicates a deeper commitment to the developmental needs of the class itself’.

External link., Roger Southall shows that historically the black middle class was a politically progressive force, while at the same time quite uneven: ‘at different times, in different situations, in different locations it was variously (and sometimes simultaneously) liberal, conservative, nationalist and radical. It might even be argued that the only consistent thing about the black middle class was its political inconsistency.’ He argues, ‘that the black elite and middle class now in positions of power, privilege and profit are not likely to bite the hand of the party-state that feeds them. The more dependent they are upon the ruling party for their welfare, the more they are likely to support it.’

One should however not take for granted that this would be a more democratic course. Middle class behaviour is not principled beyond acting in the own interest, but rather pragmatic and opportunistic. Southall therefore warns that, ‘the black middle class may back a drift towards “competitive authoritarianism”, a hybrid form of governance in which democratic forms belie a reality of authoritarian rule.’ – While we follow the ANC-internal battles over succession and the handling of state capture, the verdict on the role of a black middle class is pending.

Henning Melber is a Senior Research Associate with the Nordic Africa Institute (NAI) in Uppsala and Extraordinary Professor at the Department for Political Sciences, University of Pretoria and the Centre for Africa Studies, University of the Free State in Bloemfontein. This blog text is based in part on edited extracts from the Introduction and Conclusion of Henning Melber (ed.), The Rise of Africa’s Middle Class: Myths, Realities and Critical Engagements

On Thursday 10 August, Henning Melber will present his book in a book launch seminar

External link. at the Centre for the Advancement of Scholarship, University of Pretoria.

(Since the article was first published, dead links have been removed)