The Crisis of Politics in Southern Africa 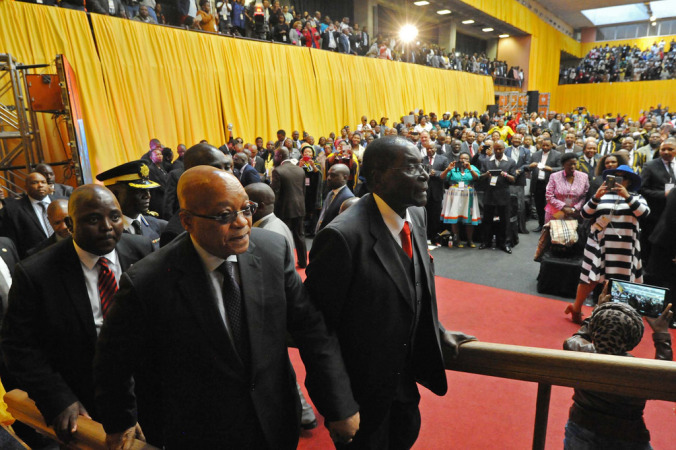 Politics are in shambles – not only, but also in Southern Africa. Populism and political gambles make headlines in many different places from London to Washington.

If of any comfort, this suggests that there is nothing really genuinely typical about African versions of political populism, which would be fundamentally different from political strategies almost everywhere else too. Nor are the flaws in democracy typically African. While this might put some events into a wider perspective, it is nonetheless worrying to follow the current political turmoil in some states of the Southern African Development Community (SADC).

The woes in South Africa are only the tip of the iceberg. On 1 June, President Zuma closed the parliament’s budget debate in front of empty seats. Opposition parties boycotted his speech

External link.. Trumping his US-American colleague, he declared to be “proud to have been a leader during this period in our democratic transition”. End of May an academic team had published the dimensions of “state capture”. The study shows

External link. of state assets is entrenched. Additional explosive evidence was presented only days later through thousands of leaked e-mails. Dubbed as “Gupta Leaks” they document

External link.a mafia-like network among Zuma-loyalists and the Indian Gupta clan. It illustrates the massive influence if not control over political appointments, the hi-jacking of higher public administration and embezzlement of enormous proportions.

65% of South Africans want Zuma to resign . An all-time low approval rate of 20% makes him less popular among the electorate than Donald Trump

External link.. But despite growing party-internal demands the leadership of the African National Congress (ANC) still backs its president. At least demands by the party for an investigation of the “Gupta Leaks” have now been made. The leaked communication to be scrutinized also reveals plans for an “exit option” to offer Zuma a posh retreat in Dubai instead in his traditional Zulu-homestead Nkandla (which remains one of the many financial scandals during his presidency). Zuma quickly denied such plans

External link.. Rather, he seems for the time being more concentrating on pulling the strings to secure with Nkosazana Dlamini-Zuma a successor as party president

External link. and next Head of State over his deputy Cyril Ramaphosa. This is motivated by the assumption that once in office, his former wife would not endorse any legal prosecution of the father of her children. – It would not be the first time that he would escape responsibility for criminal acts before the law.

But not all other political parties reap the benefit of the blunders disclosed. The Democratic Alliance (DA), the official opposition and biggest winner of last year’s municipal elections, has its own problems. These limit the gains from the ANC’s mess. After tweeting that not all was bad under colonialism, its former leader and premier of the Western Cape province, Helen Zille, caused since mid-March a protest storm. She tried to justify her judgment

External link.and posed as a victim of deliberate misinterpretations, before finally half-heartedly apologizing. Since weeks the party is at pains how to deal with the scandal. DA-leader Mmusi Maimane finally announced that Zille is suspended

External link. and that a disciplinary hearing will decide over any further political consequences. But a resilient Zille pointed out that this was not in compliance with the DA’s statutes

External link.. The party then contradicted Maimane, claiming Zille was not suspended

External link.. – All within some 24 hours and followed by another stubborn effort of Zille to justify her slip

External link.. Which ever the outcome of the affair will be, the DA’s image is severely damaged. Aspirations to emerge as the new majority party received a major blow and setback with such unfortunate reminder that the party’s roots were in a predominantly white liberal opposition to the Apartheid regime and anything but a genuinely black alternative.

With the regional hegemon embroiled in domestic policy issues of hitherto unknown proportions, politics in the sub-region seem not much better off. As discussed on the popular South African radio station 702 with the prominent host Eusebius McKaiser

External link., the state of opposition politics and democracy elsewhere in SADC is in shambles too. The fragile political climate and the mentality of most opposition politicians hardly offer meaningful alternatives. Undemocratic practices permeate every other of the regional democracies in differing degrees. Beyond multi-party systems with regular elections, they at times resemble very little true democracy in the absence of a level playing field.

External link. has after several earlier announcements now indeed for health reasons decided to select a successor of his choice. The scenario will secure that the family “oiligarchy” will remain in control of politics and the (currently ailing) economy. The governing People’s Movement for the Liberation of Angola (MPLA) will continue to use the state apparatus to ruthlessly suppress any meaningful social protests.

In contrast, Robert Gabriel Mugabe – reigning in Zimbabwe since Independence in 1980 – shows no intentions to retire. Despite increasingly frail, he was nominated again as the Zimbabwe African Nation Union/Patriotic Front (ZANU/PF) candidate for the next presidential elections in 2018

External link. – then being 94 years of age. But everyone follows anxiously the party internal power struggles over the ailing autocrat’s replacement

External link.. Fears are not too far fetched, that the vacuum created by his departure might create a worse situation. The regime’s constant violation of human rights

External link, opens in new window. is like in Angola geared towards any form of meaningful opposition. But concerns are growing, that the unresolved succession might add a party-internal dimension of violence to local politics.

End of May the DA’s Maimane made headlines

External link.when being refused entry into Zambia. He was on his way to attend a hearing in Court against the country’s main opposition leader Hakainde Hichilema of the United Party for National Development (UPND). Since years Hichilema is embroiled in a personal feud with the Head of State Edgar Lungu of the governing Patriotic Front (PF). Arrested in early April after obstructing a motor cavalcade of the President through a competing race with his own escort, he faces charges of high treason for willfully putting president Lungu’s life in danger

External link. to the decline of the once praised democracy, which allowed for several relatively peaceful transfers of political power since the turn of the century. It was ridiculed in revealingly simplistic terms

Competing parties seeking to obtain political control over governments are by no means a guarantee for better governance and a more peaceful daily live. Aptly described as a “Groundhog Day election”

External link. citizens in crisis-ridden Lesotho went for the third time since 2012 to the polls with anything but new alternatives or options

External link. as regards policies. On 3 June their limited choice was between the former Prime Ministers Tom Thabane (aged 77) of the All Basotho Convention (ABC) and Pakalitha Mosisili (aged 72) of the Democratic Congress (DC) as the main contenders for the highest political office. Thabane’s campaign was generously sponsored by the Guptas. This sparked fears that his return into presidency might risk another state take over. The outcome seems another fragile coalition government under Thabane

External link. – provided, the military accepts the result. Cyril Ramaphosa, who as SADC-mediator

External link.was kept rather busy during the last years, would certainly not mind to devote his full attention again to domestic policy matters.

Meanwhile, the biggest challenge for relative political stability in the region might still be in the making: President Kabila’s second term in office in the (not so) Democratic Republic of the Congo (DRC) ended with December 2016. He hangs in with the promise to vacate the post latest by end of this year. But despite the constitutional two-term-limit, his plans remain a matter of speculation. An interview published by “Der Spiegel”

External link. in early June was qualified by the weekly journal as “a document of evasiveness”. Kabila simply refused to answer the question if he considers another term and flatly denied that he had promised anything, including elections. An already explosive situation, marred by violence end of last year provoked by Kabila’s extended stay in office

External link., looms with potentially devastating consequences not only for the Congolese people.

After all, the DRC is neither The Gambia, nor Lesotho. An unconstitutional continued reign of Kabila junior would not only provoke further bloodshed at home. Its spill over effects will challenge SADC’s willingness and ability to find solutions to regional conflicts in the interest of relative stability

External link.. A stability, which is already in the present state of democracy in the region at best fragile and indicative of the crisis of policy in most of the SADC member states.