Africa, Solidarity and the ICC 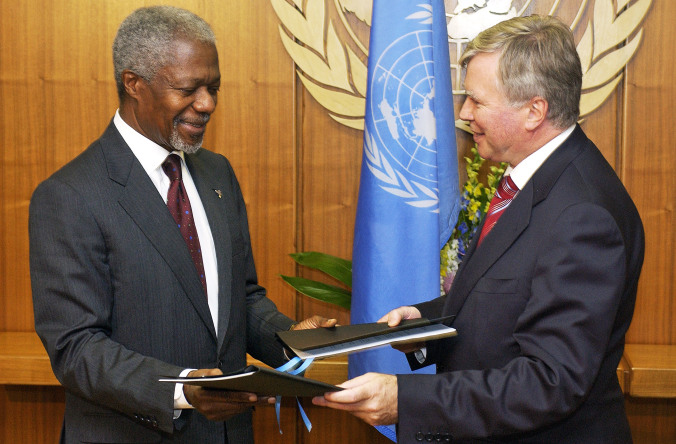 New York, October 2004. UN Secretary-General Kofi Annan shaking hands with Philippe Kirsch, President of the ICC, after signing an agreement on the relationship between the UN and the ICC. The UN, under Annan’s leadership (1997-2006) played a key role in the establishment of the ICC. Photo: Eskinder Debebe, UN.

The International Criminal Court (ICC) was created to investigate and prosecute war crimes, crimes against humanity and genocide. A total of 124 countries ratified the Rome Statutes and brought the ICC into existence. 34 African states were the biggest continental bloc of signatories. The ICC can only bring individual perpetrators to task and its jurisdiction is limited to citizens of countries that ratified the Statutes. None of the big powers were among these.

In contrast, African governments took African perpetrators to task. As a result, the ICC almost exclusively investigated and prosecuted crimes on the continent. But the ICC not only prosecuted rebel leaders. It also investigated the responsibility of Heads of State in acts of mass violence, such as the Sudanese President al-Bashir or Kenya’s Uhuru Kenyatta. This reinforced the feeling that the powerful in the world are the ones setting the rules of the game while not abiding to them.

After years of dissatisfaction the first African states terminated their obligations. Burundi, South Africa and Gambia announced their withdrawal from the ICC in October. In contrast, Botswana, Ghana, Mali, Nigeria, Senegal, Tanzania and Zambia were among the states expressing within days their regrets over these decisions. After all, who benefits from such exit as response to the double standards and asymmetrical power relations in global politics?

Leaving the ICC erodes international criminal jurisdiction and thereby the protection of people further, especially on a continent, where no other local, regional or continental court with a similar mandate exists. The SADC Tribunal as the only of its kind was closed when its judges ruled against the Zimbabwean government. Being confronted with a highly flawed international system, where the rule of law all too often degenerates into the law of the rulers, should have different consequences.

The decisive question to answer therefore remains: solidarity with whom – the rotten apples in the basket or the ordinary people suffering?

One should rather demand that only ICC member states have a say over its matters and decide if and when it executes its jurisdiction. After all, EU member states (or those members of any other body, be it international or even the local football club) would rightly so dismiss any influence or claim by non-members over their authority to decide and act. This would mean that three of the Permanent Members of the United Nations Security Council (China, Russia and the USA) would not be entitled to refer matters to the ICC. Notably, four of the Permanent Members are currently accused of war crimes outside their territories and should therefore be investigated by the ICC if it had the power to do so.

Being unable to prosecute some of the imperialist aggressors of this world, however, should not let all perpetrators go off the hook. Advocacy for strengthening the ICC as an instrument used by a coalition of the willing would instead recognise and live up to the kind of international solidarity, which had organized worldwide support for the resistance of people on the African continent against colonialism. Apartheid, for that matter, was declared by the United Nations a crime against humanity. Solidarity and a global governance system guided by normative frameworks rooted in the UN Charter and related conventions were, after all, not only ideological humbug or completely ineffective.

Those states and policy makers who lower their levels of advocating human dignity and rights and compromise justice for the sake of convenience as a misnomer of solidarity with the wicked and evil have often forgotten that they earlier on were beneficiaries of a similar uncompromising siding with what is right in the face of wrong. The decisive question to answer therefore remains: solidarity with whom – the rotten apples in the basket or the ordinary people suffering and victimized by those who do not care for their lives? – Which side are we on?