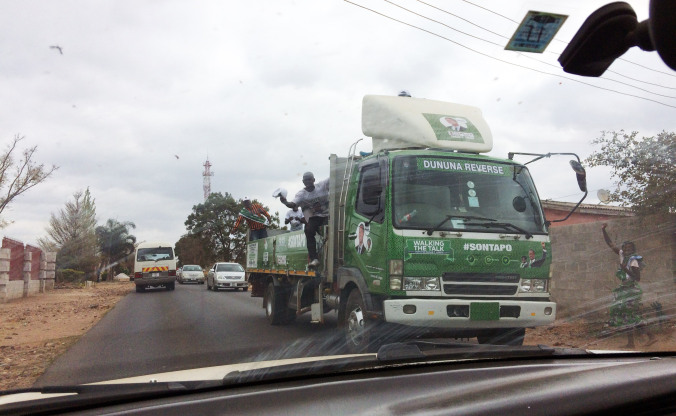 A campaign truck for President Lungu and his party, PF. The provocative slogan Sontapo epowabombele (‘point at your works’) was developed to challenge the opposition to finger-point what it has done for Zambians.

Zambia has just gone through a highly contested presidential election that saw incumbent president Edgar Lungu, leader of the Patriotic Front (PF), win with a narrow margin over Hakainde Hichilema, the leader of the United Party for National Development (UPND). The opposition accused the ruling party of rigging, and challenged the results

External link. with a petition to the Constitutional Court on 19th August. The court is legally mandated to hear the matter within fourteen days.

Rising political violence has been one of the most worrying developments during the electoral campaign leading to the 11th August polls. PF and UPND engaged in several violent, and sometimes lethal confrontations.

External link., with most of the violence committed by PF supporters – or “cadres” as party followers active on the streets are known in Zambia. The UPND claimed the police had failed to protect their members and justified retaliation as self-defence. Accusations of either party creating a militia

External link. were thrown back and forth. Whatever the truth behind these claims, sights of predominantly PF followers in military style garb were an intimidating sight. UPND supporters where often scared to wear their party regalia for fear of being attacked – a well-founded fear, as a University of Zambia student was killed

External link. on 24th June in Lusaka allegedly for wearing a UPND T-shirt.

Such attacks contributed to a generally tense atmosphere, something people had not experienced for the last two decades or so. While a number of people were outraged by the violence, many hoped that the country’s tradition of peacefulness would ultimately prevail. In reality, the events instilled fear and people were reluctant to openly discuss the rising violence in public. As I travelled on a minibus in Lusaka in early July, when the campaign was in full swing, an elderly gentleman sitting behind me voiced loudly his shock at the brutal beating of a young man, a neighbour of his and a Rastafarian, who refused to respond with the PF hand symbol – a raised fist – when solicited by a group of PF followers. No one on the bus responded to his outrage. We all sat in silence, and the bus conductor who collected money was wearing PF regalia wrapped around his head. This response was unusual. In my past experience, when someone on public transport raised a contentious subject, there was always someone ready to engage in discussion.

In the elderly man’s view, the level and intensity of violence was unprecedented in Zambia’s recent political history. He was surprised by it, as was I. He also admitted that, like other Zambians, he was initially in denial. Zambian political commentator and historian Sishuwa Sishuwa told me that the violence shows a continuity with the kind of politics that emerged during the decolonisation struggle in the 1960s. In March 1963, for example, violent clashes between supporters of the United National Independence Party (UNIP), led by Kenneth Kaunda – who led Zambia from independence in 1964 until 1991 – and the African National Congress (ANC), led to the death of Omela Mumba, a regional secretary for UNIP in eastern Zambia, then an ANC stronghold. In the post-independence period, to the early 1970’s, multi-party politics continued to be characterised by violence, with UNIP members engaged in confrontations with supporters of the ANC led by Harry Mwaanga Nkumbula, and the United Progressive Party (UPP) led by Simon Mwansa Kapwepwe.

These hostilities were marked not only by ideological differences, but were also tinged by ethnic politics. National unity and the struggle against inter-ethnic rivalries were Kaunda’s justifications for constitutionally establishing a one-party state in 1973. Kaunda argued that multi-party democracy promoted ethnic divisions and violence. He portrayed himself as the unifier against these dangers, consolidating his own position as the Head of State. He welcomed some prominent members of the opposition parties in UNIP, but initially failed to persuade Nkumbula and Kapwepwe to join. When the two opposition leaders finally joined the party in 1978, and announced their intention to challenge Kaunda for its leadership, UNIP rules were hastily changed to disqualify them from running.

There are some similarities with the way Lungu ascended to power. He became PF president by violently hijacking the party convention

External link. at the end of 2014, thus preventing a democratic election of a new party leader following the death of Michael Sata. Starting in the last months of the 2016 presidential campaign, Lungu also forcefully resurrected the mantra of “One Zambia, One Nation”, used by Kaunda to encourage unity and inter-ethnic peace. Lungu’s team also deployed a consistent number of songs on national TV and radio stations calling for peace and acceptance of the results, which are reminiscent of Kaunda’s benevolent dictatorship, when the rhetoric of unity went hand in hand with repression of freedom of expression. The major difference with Kaunda is that Lungu, who is perceived by his supporters as a “humble man”

External link., has governed the country since 2015 with no welfare largesse and in the midst of a major economic downturn. In economic terms at least, there are hardly any signs of Lungu’s “benevolence”.

What is most troubling is that Lungu’s appeals to peace and calm almost always end up with blaming the UPND and its “tribalist” leader Hakainde Hichilema, a Tonga speaker from Southern Province, for provoking violence and threatening national unity. While there is some truth to the claim that Hichilema has also played on ethnic loyalties, especially in his home province, Lungu’s predecessor Michael Sata rallied the support of Bemba speakers in the northern parts of the country and in the Copperbelt, with open references to an ethnic agenda. Perhaps less vocally, Lungu while continuing the PF alliance with powerful politicians that protect “Bemba interests”, has also been consolidating in his own eastern Zambia regional ties with politicians like former president Rupiah Banda who hails from the area.

During the campaign, some feared that Lungu’s intention in preaching peace, while letting his party supporters run rampage, was to escalate conflict to a level where he would be justified to call a state of emergency

External link. and no state of emergency has been called

External link. so far. But the violence and the disregard for the rule of law have not gone away. The UPND had to submit their petition to the Constitutional Court quietly, in order to avoid a physical clash with PF supporters and the police. The Constitution is also clear that Lungu should step aside to let the Speaker of the National Assembly perform executive functions as acting President, while the legal process takes its course. Against the advice of the Attorney General, Lungu has refused to step down and his legal team petitioned

External link. the Constitutional Court to interpret the matter.

Worse, media freedom has been heavily curtailed. A blackout of some of the country’s key media players started in June with the closure of the largest independent newspaper

External link. Muvi TV, the largest private television station in the country, and two independent radio stations, arguing that their reporting is a threat to national peace and security. Since the elections, riots

External link. have broken out in UPND rural strongholds, but the limited capacity of independent media to report on these matters, and internet disruptions

External link. in some of the areas affected, have led to a social media panic where it is difficult to distinguish fact from fiction. Particularly disturbing is the highly divisive language drawing on ethnic stereotypes that is characterising this electoral dispute. Zambians such as myself are asking: what has caused these fissures in a country otherwise known as peaceful?