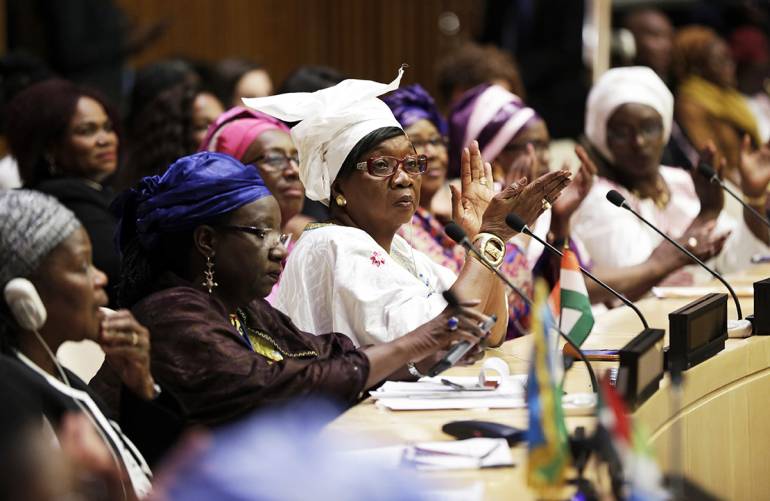 The workshop will bring together researchers and practitioners from the Nordic countries and the African continent. The continent has witnessed uneven developments on women’s political representation ranging from Rwanda with the highest percentage of women in Parliament in the world 61.3% to Nigeria with only 5.6%.

Funding will be available for a selected number of African participants.

The workshop aims at bringing together participants with diverse country experiences e.g. Botswana, Ghana, Nigeria, Uganda and South Africa. The purpose of the workshop is to put a spotlight on the African experiences and lessons learnt from contributions about women who made it into politics, their way into politics and their political achievements. The workshop explores why men are overrepresented in politics in many countries on the continent and aims to bring about change based on new knowledge on institutional barriers. The focus of the workshop will be on the masculinist formal and informal institutions excluding women from high-level politics and the possible solutions to change these in a more women-friendly direction. The workshop will last two days and include theoretical as well as practical sessions and inputs from the Nordic countries as well as the African continent giving prominence to the participation of African scholars and activists. The workshop has multiple purposes and it offers for researchers and practitioners:

Several arguments exist for more women in politics (Dahlerup & Freidenvall 2003). First, there is the argument of ‘justice’, as women represent half of the population it would be fair that women hold half the seats at a national level. Second, one can put forward the argument of ‘different experience’ suggesting that as women have different gender roles they also have different experiences which should be reflected in politics at a national level. Third, it can be argued that only women can represent women’s interests as women and men have different and conflicting interests. Fourth, more women in politics at a national level may serve as role models for other fellow women and girls. In addition, Anne Phillips (1998) argues that women’s representation revitalises democracy. As such women’s representative representation is expected to bring about change in the substantive representatives. However, if this should be the case female politicians should “…[h]ave distinct views on women’s issues, bring a women’s perspective into political decision-making, or bring a different style and set of role expectations to politics” (Bauer & Britton 2006; 4). Several of these arguments are problematic as they are homogenising women’s interests despite of differences. At the workshop these arguments will be debated and it will be explored how the female parliamentarians link to their women’s constituencies in different African country contexts.

The workshop is inspired by ‘feminist institutionalism’ taking its point departure in that institutions are gendered rules, norms and processes (Krook & Mackay 2011). However, as institutions are gendered they can also be re-gendered. Institutions are defined as “rules and procedures (both formal and informal) that structure society by constraining and enabling actor’s behaviour” (Waylen 2013; 114). As such focus will be on informal as well formal rules for institutions influencing women’s political representation in African contexts and different forms of institutional change such as ‘layering’, ‘displacement’, ‘drift’ and ‘conversion’ (Mahoney & Thelen 2010). Examples of formal institutions could be political parties who are influential in ensuring gender responsive candidate selection processes and the election system where proportional representation works more in favour of women’s representation. Informal institutions could be stereotypical labelling of women in politics, a culture of gender discrimination in Parliaments and different forms of violence against female politicians ranging from verbal abuse to physical assaults (H. Madsen 2018). The workshop also focus on men and masculinities hereunder the role of male and female networks and their potential resources for female parliamentarians.

During the workshop there will be a shifting focus on interventions from selected presenters and panel sessions. The workshop will work both as a forum for sharing of experiences and knowledge between researchers and practitioners and as a ‘working session’ for debating presentations and papers with discussants for each paper in the panel sessions. After the workshop some of the papers will be selected for publishing in a book in the ‘Africa Now’ series as an outcome of the workshop. We welcome papers within the following themes: