Never Despair was a racehorse donated in 1985 to the ANC and the Somafco School in Tanzania by the Swede Mr Bengt Nordenbrand. Nordenbrand owned a number of horses and used to give his winnings to his daughters, but as he tried to do so one day, the youngest one who was 19 years old, refused to take it arguing that they had what they needed and it should be given to someone who needed it better. On the kitchen table was a newspaper with an article on apartheid in South Africa and the ANC. So it was decided. ANC became the proud owner of a Swedish racehorse with the appropriate name “Never Despair”, named after the story “A Story Goes With It” by the American writer Damon Runyons. The children of Somafco had their own horse to dream about and cheer on for several years.

Ms Lindiwe Mabusa, the ANC representative in Sweden, kept a close eye on Never Despair and through her, Nordenbrand became more involved in the struggle for liberation in South Africa. He was invited to Somafco in March 1987 and also attended a conference in Harare on the situation of children under the laws of apartheid in the autumn of that same year. In Harare, he met with Oliver Tambo who was very enthusiastic about the horse, having been a jockey himself at a young age. Nordenbrand also met a young student from Somafco and talked to him about his dreams. This led to a new initiative: to assist young people to study at university by securing funds among his contacts and friends. Mr Aaron Pule Mabalane could start his studies at the South Devon College of Arts and Technology, UK, in 1990.

Some time after the fall of apartheid, Nordenbrand got a phone call from the Minister of the Treasury who wondered about a racehorse the state of South Africa now seemed to own. In order not to complicate the nation’s book keeping, Never Despair was returned to Nordenbrand. Never Despair galloped for the last time at the age of 19 into horse heaven. 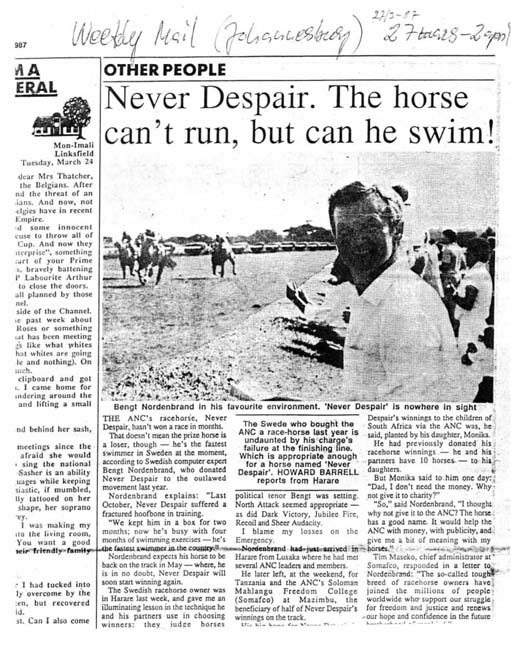