I had previously worked in Africa and after that experience never quite resettled in Sweden. The longing for Africa was too strong and I was tired of answering questions like: Was it hot? Where there snakes? 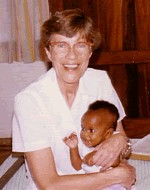 I had a streak of defiance in me. As a teacher (in Sweden), I often heard "there is no point in trying", or "calm down Karin, you are not in Africa now", or "you don't have to do that". I read a lot about Africa during this period, a lot more than I had ever done. About the decisiveness and patience of ANC during that long period before Sharpville, and after, about the will to struggle and sacrifice, about the solidarity in the country and in the rest of Africa, later also in the rest of the world. With that tone of defiance I said to myself "I want to be a part of all that, in my way, if I am allowed". So I called the Africa Groups of Sweden and asked whether I was too old to work as a volunteer, and the answer was "that is not our decision, it is up to the country". I thought that was a good way to answer and it has coloured my view on the Africa Groups and the definition of solidarity.

Somfaco became my place of work as a volunteer for three years. Neither the work nor the living arrangements came close to what I was used to, but it was the same for everyone in that exile camp. Life got new dimensions for me. I saw the closeness and solidarity between the ANCs and was accepted and appreciated, and even though I wasn't part of the ANC, I became a "comrade". I was very lucky to be there and share the experience when everything started to change for South Africa.

Something was going on, that was very clear. One day on Radio South Africa, there was an announcement that "de Klerk will hold an important speech tomorrow". I then went home for my lunchbreak the day after and listened to the news saying that ANC was now legal and Nelson Mandela would be free very soon. I then went back to the hospital to share the news.

I was there when Walter Sisulu at the head of a delegation of freed prisoners who had been sentenced to life visited Somafoc on their way to Sweden, and I was there when Nelson Mandela came. The atmosphere during this time is something I will never forget, it is indescribable. Especially when we understood that Mandela was coming. All the expectation, joy, a touch of nervousness and hundreds of questions floated in the air. What does he look like? What kind of car will he be using? How will he be dressed? The children in particular were bursting with questions. And then comes the day. Everything is carefully cleaned, the security men have done their wastepaper-basket checks and looked behind the bushes; together with the hospital director walked exactly the same way as Mandela will be escorted. The children, once so neat and clean in their freshly ironed school uniforms, are now covered in mud, as the wait grows longer.

And finally, they arrive! The cortege glides into the area slowly, very slowly, and there they are, him and Winnie, on the back of a pick-up truck, waving, smiling. There is a convention the day after in the auditorium for everyone. A group of young children sing before Mandela gives his speech. He sits one of the youngest onto his lap when he starts speaking. The previously so euphoric ambience now transforms into a total silence and attentive listening, such a difference from before. He speaks to the youth about the future, about the importance of taking care of the time they have left in school so they are well-prepared when they get back home.

This picture of him - with the child on his lap, speaking with a serious touch to his voice and the auditorium breathlessly listening - is what I want to remember. As a contrast to the previous happy carnival atmosphere that ruled. To know, that here was everything - happiness and a party, seriousness and decisiveness. Everything at the same time.